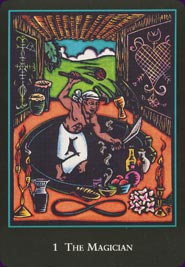 People are the focus of this earthy but lighthearted tarot deck: people of every shape, age, hue and ethnicity. The World Spirit Tarot has recognisable and readable tarot scenes that were created by being carved out of lino, printed, then hand coloured. It isn't pretty art, as such, but it is lively, inclusive and joyful. 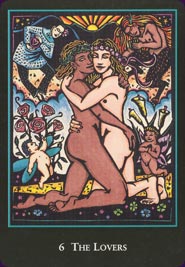 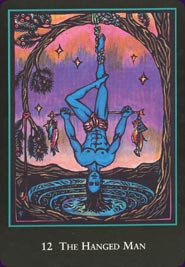 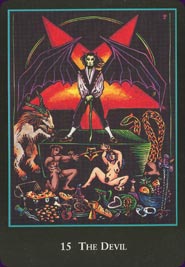 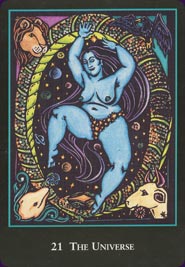 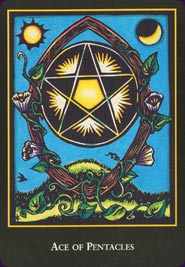 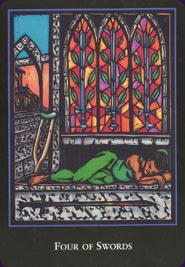 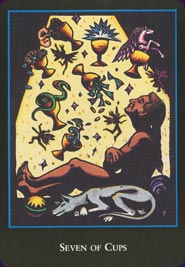 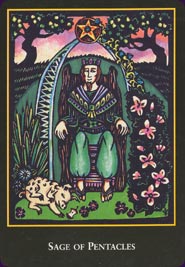 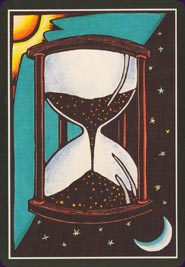 The World Spirit Tarot is all-inclusive, multicultural and non-gender biased. People are the focus of this light hearted and earthy tarot deck, which shows people of every shape, age, hue and ethnicity.

People appear in Renaissance cities, African savannahs and Germanic villages. There are Romans, rock stars, artists, hippies, Ancient Egyptians, Pacific Islanders. The artists wasn't afraid to show nudity, either, as both people of both sexes appear naked in various positions on different cards.

The suits have been renamed from the usual King, Queen, Knight, and Page to the more ambiguous Sage, Sibyl, Seeker, and Seer. Some cards, like the Hermit, show people of indeterminate gender.

The cards come packaged in a fold out box with a pocket size, 160-page instruction book, very similar to that of the Nigel Jackson Tarot. The glossy, slippery cards are wider than usual, and have a thick black background (of a similar fashion as the Osho-Zen Tarot). A thin coloured border surrounds each picture, the colour of which changes depending on which suit the card is in.

The tarot artwork itself was created with linocut prints, then hand coloured. The style is vaguely reminiscent of woodcuts but with a more modern edge. Due to the method its creation, the overall effect is darkly shadowed and unusual.

It isn't pretty as such, but it is arresting.

The World Spirit Tarot does use a form of reversals, but the book doesn't call them as such. It mentions the ‘gift' and ‘shadow' of each card instead of the more traditional upright and reversed meanings. As the back of the cards show an hourglass, with a sun in the top left corner and a crescent moon in the bottom right, it's easy to tell which cards are upright or not. Using the ‘gift' and ‘shadow' may be only possible if you are drawing cards with your eyes shut…

There is one slight flaw in the World Spirit Tarot - the Sun card, which shows a white baby seated on a lotus flower. The baby's face is oddly mature and doesn't suit the body. The effect is disconcerting. But I like the rest of the deck and the Sun card doesn't come up often enough in readings to be a huge distraction.

The World Spirit Tarot draws on all eras and places, yet somehow manages to be both contemporary and relevant. This is one of my new favourite tarot decks.

After going through so many samples on Aeclectic Tarot, my attention drew to the World Spirit Tarot. That very day, I hopped to my local New Age Store and got it for a pretty hefty price.

For the first few months, I didn't read with it because I felt the cards were too slippery and too "wide" for my hands. It was quite difficult to shuffle. But later, I started to feel a bond towards this deck and decided to give ti another chance.

I love the way the colours are harmonized and not sharp to the eyes. The black background and sun-moon illustrations n the back fo the card add to the mysterious allure. Although all the pips are illustrated in colour and in the traditional Rider-Waite style, I feel that it still remains simplistic, and therefore easy to read with.

Even better is that the author is not afraid of showing nudity, and also includes all races, hence the "World Spirit". I own a great many beautiful decks, but what makes this stand out from the others is that I can really connect to it. On my very first reading with this deck, I achieved stunningly accurate results. This is quite a different experience from other decks, where I had to so several "trial" readings before I started to get any accurate results.

This deck doesn't use "page", "knight", "queen", or "king". Instead, we have the "seeker", "seer", "sybil" and "sage". Still, this does not confuse the reader because the author does not think there should be hierachies here.

The drawback is the LWB included with the deck. Because of its colour and allure, I woud've expected a more detailed LWB to explain its meanings. In addition, the book seems to explain only the "Light" (upright) meanings of the cards but not the "Shadow" (reversed). It serves as a simplistic explanation of the cards, but leaves us wanting more.

This beautiful deck, with original lino-cuts by Lauren Leary was a pleasure to work with the images once again giving a great part of this pleasure.

This is a more traditional deck with the suits of swords, wands, cups and pentacles, with some changes to the court cards (for example, Sybils instead of Queens which I like). The images sometimes reflect tarots such as the Rider Waite, but sometimes really choice images have been chosen for certain cards, such as the figure of Anubis as Judegment, weighing the life of the person against some indesipherable symbol, and a voluptous dancing woman, surrounded by Ourobouros as The Universe. Well, they made sense to me at least.

I also liked the way the creators play with gender, with The Fool, traditionally a male figure, being replaced by a woman jumping from a roof to be with the birds while her dog tries to grab the hem of her skirt and pull her back. Meanwhile the birds fly around her with flowers in their beaks.

In the two of cups, a card which I think signifies a loving relationship or partnership even more so than the Lovers, two people make a commitment to each other within a circle, their arms entwined with their cups, symbols of the emotions, toasting the future. In the sky both Pan and Kuan Yin bring pleasure and peace to their union. I liked the androgenous feel of the couple and the inclusivity that brings.

There are so many decks around today that it's hard to choose and I imagine that a beginner would feel overwhelmed by the variety. I'd recommend this deck for experienced tarot readers and beginners. While it doesn't stray too far from the traditional tarot suits and cards, it brings a new dimension with the vibrant art and inclusive imagery.