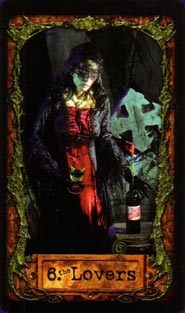 The Wormweird Tarot is a true tarot of horror - there are few romantic gothic visions in this deck! Described as "an Absinthe-fulled descent into a Victorian never-land of plague, dark magick and monsters", the cards feature skeletons and piles of bones, ghosts, ghouls and more. The images were created using stage illusions and wax sculptures that were then photographed.


Card Images from the Wormweird Tarot 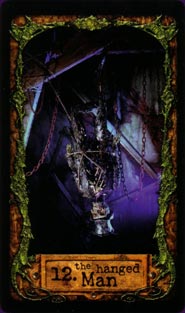 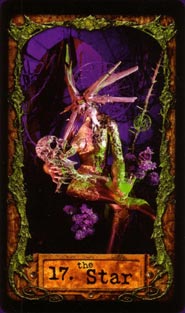 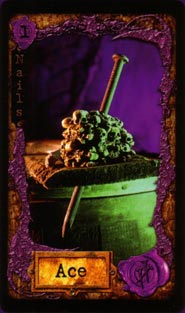 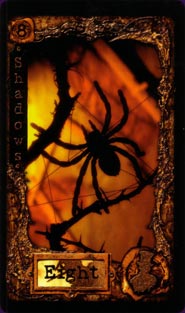 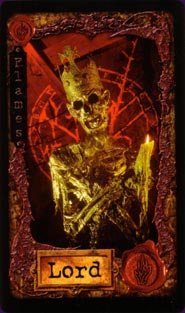 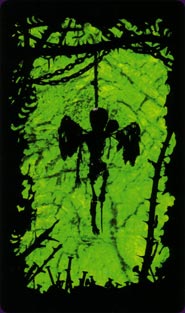 Being a lover of horror houses, B-rated horror movies and the Tarot, this deck seemed a wonderful deck to add to me collection. How surprised was I upon receiving this deck that it is more than a deck to throw on the shelf! Absinthe is wrapped in mystery and myth. It can often illicit images of a lone figure, drinking in a dimly candlelit room, working with dark magick and mystery, while under the influence of mind maddening hallucinogens. This mystery along with the look and feel of the deck drew me in.

The deck comes as a set with 80 cards including: 22 Trumps, 40 Suit Cards, 16 Court Cards, Title Card and a Wild Card. The deck includes a 38 page book called “The Wormweird Codex or, The Anatomy of the Damned”. They arrive in a somewhat flimsy box and the box has a cutout that does not fit all the cards. (I strongly suggest acquiring a bag, box or somewhere safe to store the cards.) Cards themselves when I first received them were very stiff and stuck together. However I found they popped off each other easily and without damage. Cards come in a random order however this was intentional to reflect of chaos behind the story of Wormweird. They are very glossy and are on thick yet flexible card stock. Cards are larger sized at 5 Ľ” by 3 ˝”. Shuffling may be difficult for smaller hands. The card backs feature a black thorny silhouette border with a figure with wings hanging from a rope against a “Absinthe” green background. You would be able to quickly spot a reversed card. All cards are numbered or titled and include a scrollish border that is colored according to Major Arcana or Suit. Court cards are associated with colors and each has its own seal or emblem in the bottom corner.

Justice is numbered 8 so Strength is 11. There are some changes to titling of Major Arcana including:

1. The Alchemist /The Magician
11. The Scream/ Strength
15. The Wormwood Devil /The Devil


There is also the addition of “Baron Alchymus” the Wild Card. Court Cards are as follows:


This deck uses real artistic sets based on a Victorian look/feel. For each card the Author/Designer built wax figures, sets and with the use of his camera, mirrors and smoke created each image. He did not alter or digitally enhance the pictures and it gives you the feeling of looking into a scene. In his words he says “The Wormweird Tarot” is an art gallery, a spook-house, a waxworks, a cabinet of curiosities, yet above all, a Tarot Deck”. I actually really like this as so much thought went into each card and it gives me the excited and apprehensive feeling of walking through a horror house, just waiting to see what is around the next corner!

The deck is based off the story of the realm of Wormweird in which the City of Wormwood is the capitol. The city suffers from a strong addiction to “Absinthe” and is thus aptly named. Within the realms of the city if an Insane Asylum run by the father of Baron Alchymus. The Baron wants to close down the asylum and create an Absinthe distillery yet his father stands in the way. When his Father mysteriously passes away and the council approves the distillery the insane inmates are released and the addiction grows. Plunging the city into madness and decay. This is where the story of the Wormweird picks up. This deck is dark, dreary and based on horror.

Now when I initially bought this deck I intended to have it as a “collectors” deck. I thought I may even consider using it for novelty readings for Halloween. However after working with this deck for months I have discovered it to be much more than a simple collectors deck, and am surprised and delighted that this deck is fully functional for tarot readings.

Though this deck will not be for everyone and I would hesitate to recommend it to a new or learning student it is still a great deck. If you are more interested in “Book” meanings then the book that is provided should help you along. It details the story above and the Major Arcana is gone through card by card in detail with the characters relation to the story of Wormweird and the divinatory meaning, which reads like somewhat advisory as well such as “If you are touched by love, cherish and nurture it always”. Each Minor Arcana and Court Card also has a story and Numerical Attribute giving the divination meaning of the card. At the end of the book is a detailed write up of the Wild Card – Baron Alchymus. However the card only shows a small window of the card so I suggest you take the deck with you to study and compare. What I like about the deck is that it can be read in a classic meaning/book style or intuitively. An example of this is in asking a “Is She Pregnant?” question I pulled a card right side up and it was the Ace of Flames, however what was immediately noticed by me is the card shows a lit candle and a green figure, the candlelight illuminates a fetus in the figures womb. So though the book meaning is different, based off my question I would say this is an obvious answer! This is when I decided to give the deck a second, third and on and on look.

I like several cards in this deck particularly, starting with the 9 of Shadows. The meaning given this card by the book is “Pain is the greatest of teachers, for its lessons are not soon forgotten”. This to me feels like a matter of the heart. In the picture we see what looks like an old corpse whom has been hung, however upon closer inspection the now empty ribcage forms a heart shape. I do not know if this was intentional but I like what it adds to the card. The Lord of Flames shows us a corpse guilded in gold with a golden crown. Though he is bathed in Gold he is still just a corpse. The Author relates him to King Midas. The Tower is an interesting card showing fire bursting out of a broken Absinthe bottle. Blood flows down the bottle and looking hard we can see spirit forms flying out of it as if being released. The Alchemist is also a favorite of mine. We often hear of the two sides of the Magician, charismatic, full of energy however there is also a side often associated with trickery and slight of hand. In Wormweird’s Alchemist we see a figure that has a man with a wand in the form of an absinthe agitator and a female is connected to him holding a glass of absinthe. This card represents the balance of male/female, material/spiritual etc. Cards such as these offer interesting perspective to the readings. In addition there is much detail to the images themselves as well as the scenery in the background, look closely! There many things to see in each card and each time you go through it you may notice more depth.

In summary I think this will end up a love it or hate it deck. However looking past the “darkness & gore” of the surface this deck offers a fun, insightful and vastly unique tarot experience.