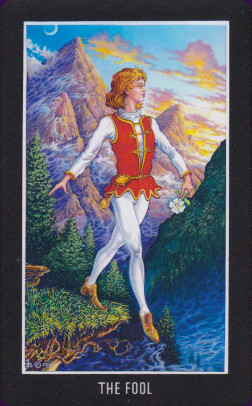 The Sacred Isle Tarot is a vivid and enchanting series of 78 paintings set in a mysterious and glamorous land. Previously only available in a majors-only set, the 78-card Rider-Waite style deck is now complete and available in a hand-made version, with the printed edition available for pre-order. 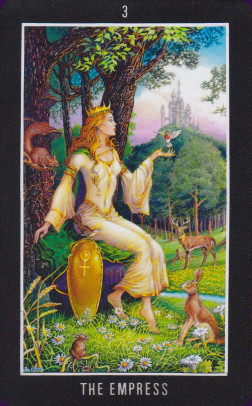 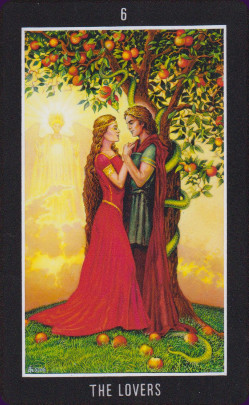 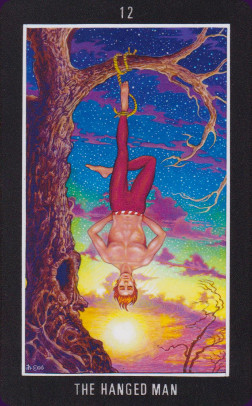 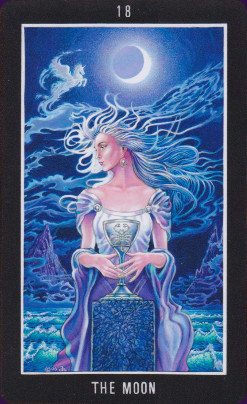 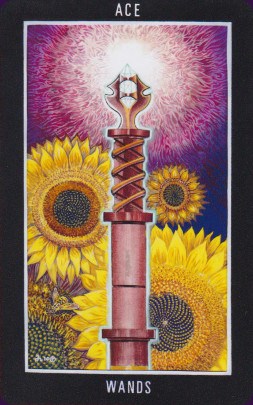 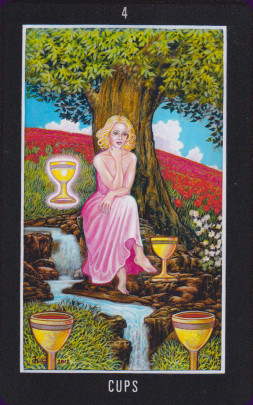 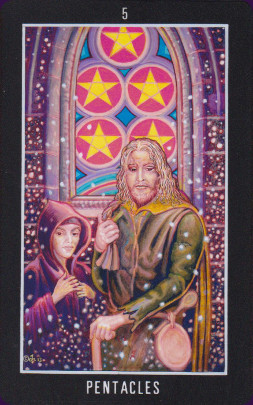 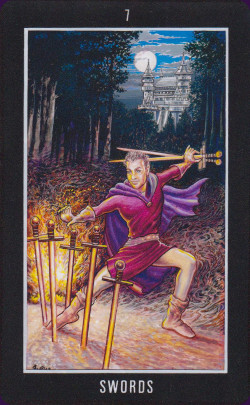 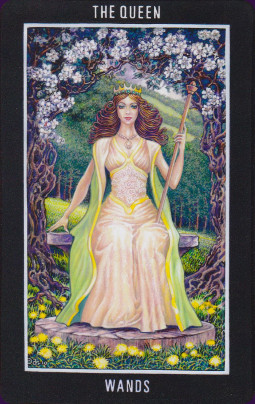 Review of the Majors-only 2007 Edition

I received a review copy of The Sacred Isle Tarot in the mail sight unseen, and knew very little about the deck I was about to receive. I opened the folder to find A4 prints of the cards, and was transfixed by the artwork by the time I’d seen two cards. The art is just stunning – it has beautiful people in a most beautiful and serene world.

The deck is a labour of love from David Higgins, English artist. His tarot work has been seen before in the Fantasy Showcase Tarot, for which he created the Four of Wands, and an incomplete deck was included in the third volume of the Encyclopaedia of Tarot, but this is his first complete deck.

His card imagery is recognisably Tarot, though with some simplification to remove extraneous symbolism (such as the dog in the Fool, the acolytes in the Hierophant, a child in a garden in the Sun) and some a personal interpretations. Death is a woman inside a white flame, moving through the galaxy towards the bright light above; the Moon shows a wild-maned woman in front of a storm-tossed sea, clasping a chalice etched with a scorpion, a crescent moon above her. Even the Hierophant looks kind.

Elsewhere in the majors, the Empress is in a field of wildflowers and wild animals, the sky multi-hued and the castle just on the rise behind her. The High Priestess is a statuesque, busty woman, holding a scroll and pointing at the floor with her left fore-finger. She stands at the top of four stairs and between two pillars vined with roses, flames burning in front of them. Pink clouds, and a shooting star are visible in the sky behind her, between the pillars. The Magician holds an illuminated infinity symbol, standing behind an open gold casket holding the four tools of the elements, around him are conjured phantasms of warriors on horses, princesses on unicorns. The perfection of the white-blonde people may not be to everyone’s taste, but the overall feeling given by the elegant Renaissance costumes, the gorgeous people, and the fairytale castles, are as though one is visiting the world of the elves.

The deck is available to buy in various formats: A4 and A5 prints, and two versions of the a majors-only deck. The limited edition (500 copies) deluxe set is hand signed and numbered by the artist; the premiere edition has just the 22 major arcana cards. David also stresses that the cards and prints are self published using the highest quality bubble jet prints, inks and high grade papers and the cards are also lacquered and waxed. The backs of the cards have navy blue and burgundy outer borders, around a reversed image of a winged blonde angel.

The Sacred Isle Tarot is just a stunning art deck with beautiful serene, tranquil images. It reminds me of the Tarot of Dreams in its attention to detail and visual attractiveness, but with a different energy. I don’t know if a 78 card version is in the works – but I would love to see it!

I bought the original majors only Sacred Isle Tarot many years ago and always carried it around with me, being compact yet sturdy. I would use it to address specific questions a client might have after a full reading using a complete deck or just pull it out of my purse to answer a question on the fly. After an event one evening I realized I didn’t have it. It had vanished. Stricken, I searched everywhere for it to no avail. Often I would ponder that little deck with regret, like an old friend who had simply disappeared. I couldn’t order another one because I couldn’t for the life of me recall its title.

Then one day while perusing new decks here on Aeclectic, I stumbled across the new Sacred Isle which looked vaguely familiar. I was drawn to the imagery and promptly ordered the full kit off the Sacred Isle web site. To my delight, the kit included the small majors deck I had lost years ago! So nice to see an old friend and I was immediately inclined to like his full deck as well.

The Sacred Isle is a classic tarot deck meaning that it doesn’t present in a unique or stylized fashion. I’m confident it will grow to become a favourite among those who love the old Celtic legends. Castles, men in tights and women in long gowns abound. There is no need for an accompanying book because any book on the tarot with references to the Waite-Coleman will suffice. The artist has followed the symbolism and structure of this early deck to a tee.

The images are strikingly colourful and detailed. For example, in the Four of Cups a woman is depicted sitting by a tree wearing an expression of discouragement, chin sitting on her folded right hand while gazing off into the distance at something we cannot see. Around her there are four cups, three sitting on the ground in front of her and one cup shimmers, floating close to her right side. She is of course completely unaware of this cup which frankly would be hard to do. You glean the meaning of the card immediately.

In the Seven of Pentacles he depicts a man with his hand on brow, wearing an expression of pale exhaustion. He has a basket of peaches suspended over his left arm with four visibly abundant peach trees behind him. In front of him a vine sprouts golden pentacles which he doesn’t appear to be noticing. The nuances and subtleties suggested in this card are delightful! An abundance of fruit in an orchard he has obviously worked very hard to plant and nurture now has grown to maturity and the work just never ends! Physical development, expansion and development can mean just more work and the fruits of our labours seem irrelevant by comparison to the effort. Abundance comes at a price.

Physically the cards themselves are constructed with a hardy cardboard stock that should hold up well under regular use and a reasonable degree of care. They are a fair size however there is a fat, white border surrounding the image which is distracting. I may just cut it off which I’m inclined to do when the cards require no title. This deck’s imagery and symbolism is familiar enough that I would have little need for labelling as I’m sure most experienced Tarotists would agree. Minus this white border, the cards will have a distinctly lovely appearance of a set of paintings from antiquity.

The downside of this deck, in my opinion, is its distinctly masculine and youthful orientation. The feminine characterization always depicts young, pretty, dainty, white girls. Typically fair haired. The male characterization is along the same lines possibly appealing to a teenaged girl in his visage. Possibly. Even the Empress, High Priestess and Temperance depict girls apparently in their mid-teens suggesting the best audience for this deck is young people. I’m not convinced that even young women wouldn’t find these depictions after a time rather disconcertingly uninteresting and insipid. Perhaps even a tad too removed from their own experience. Sadly but truthfully the deck lacks boldness and dare I say, originality.

Unfortunately for an aging crone like myself, the deck is a little too exclusive and youth oriented for use. Now I carry a much more inclusive, unique, small deck in my purse and even at the return of an old friend, it will not be replaced. But for the sake of young, pretty white readers who are reading for just the same, they would find this deck easy to read and lovely to behold.

Note: This review is of the white-bordered mass-market edition.