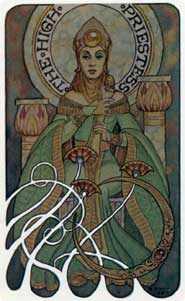 Now out of print, the Fantasy Showcase Tarot was originally published in 1980. Each card of fantasy art was created by a different artist, and six extra cards have been added to the deck. 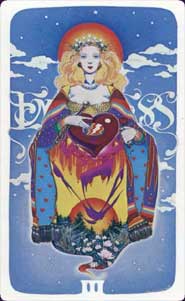 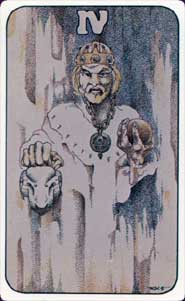 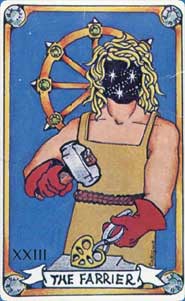 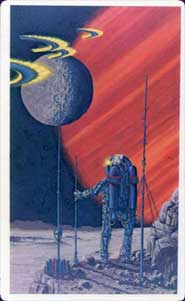 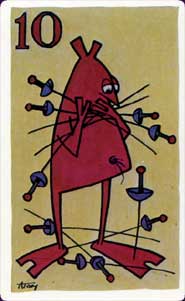 Firstly, I've often wished more collaborative decks would get printed. There's something so special about them - all that uniting together to create something brings a soar of hope and triumph to one’s heart. Within one collaborative deck you get to sample so many works from different artists, which is not only a treat for the eyes but also shows you how diverse approaches to the cards can be.

And the Fantasy Showcase Tarot definitely does all these things. Whether the cards are cartoony and humourous, or whether they are watercolour masterpieces, the visuals in this deck are bound to please, amuse, and stun. (Especially the psychedelic art that pops up here and there, standing testament to the era in which this deck was created - between 1969 and 1980.)

Many cards aren't just pretty faces either, like you might expect from sci-fi/fantasy artists who don't necessarily know much about Tarot. Many of the cards have a unique thing to say, a new take on the card's meaning for instance. They really have thought about these cards, not just looked at a RWS deck and copied it.

For example, somebody has drawn mover-shaker and rebel Jimi Hendrix as the Page of Swords; the Knight of Swords exclaims "Oh! What an ugly day!" in a speech bubble whilst grinning broadly; the Empress wears a dress of rainbow colours, painted sunsets over flowers - an entire artist's palette; and very tiny on the Hermit card we see somebody climbing up the cliff face, towards that shining beacon... Little things like this stand out in the cards, and make it a treat and a journey to behold.

The deck does have extra cards - XXII: Separation, and XXIII: The Farrier; and four 'Ladies' as an addition to the Court Cards. These can be taken out easily though, and you can read the deck without them. (And personally, I think many of the Ladies make excellent alternatives for the Queens.)

Not all the cards have titles or numbers on them - though many of them you can guess very easily, either by counting Swords, Cups, Coins and Wands, or by looking for similar symbology to most traditional decks. To the Tarot enthusiast, doing this should be no problem (and quite a fun game to play too!) whilst for the beginner it may prove troublesome.

I am not enamoured with the card backs at all – they are an ugly turquoise, black, and white abstract pattern that looks like it was drawn in Paint. The little white book that comes with the deck also leaves a lot to be desired – the card descriptions give only a very brief (around 15 words) meaning. I was disappointed to see there were no details about the images in the cards themselves – such as why the artist chose to use certain symbols, what they were trying to convey, and where they got their inspiration from.

The Fantasy Showcase Tarot is most definitely a ‘Collector’s Deck’ – its beauty, rarity (it is now out of print and quite hard to find), and nature define it as such. A collector will love the diverse range of art styles found throughout the deck (from Art Nouveau and cartoons to futuristic, pastels, and watercolours) and the fact that it is not just another Rider Waite clone. However, a beginner would find the deck quite tricky to use, simply because of the un-named cards (making them difficult to identify). An advanced student of the Tarot could use it with ease though, and I highly recommend this deck as both a collector’s piece and a reading deck.