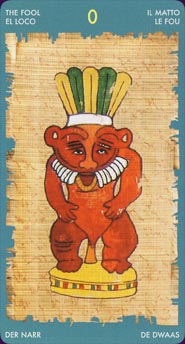 The Tarot of Cleopatra is Ancient Egyptian in theme and appearance. The 78 cards feature authentic-looking Egyptian-style figures and deities painted against a papyrus-like background, with teal-coloured borders.


Card Images from the Tarot of Cleopatra 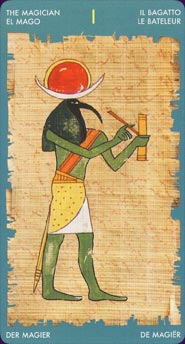 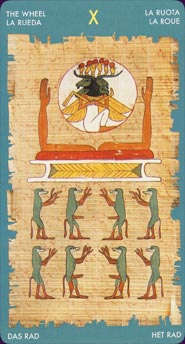 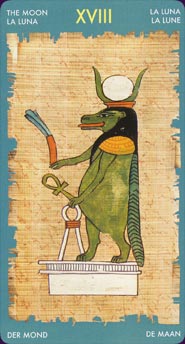 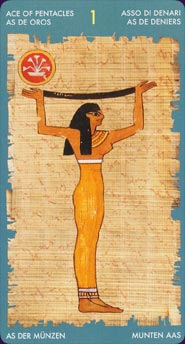 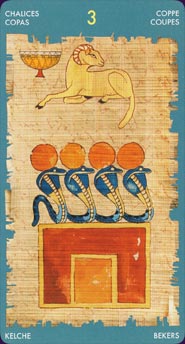 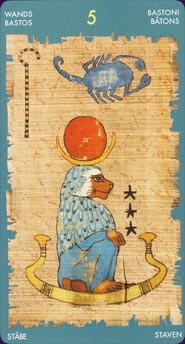 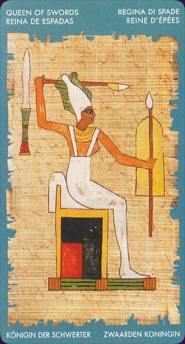 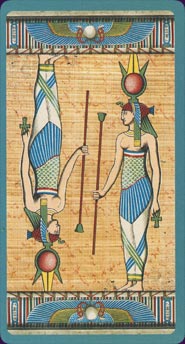 Tarot of Cleopatra Review by Solandia

New from Lo Scarabeo, Etta Stoico, and Silvana Alasia, is the Ancient Egyptian-themed Tarot of Cleopatra. "Dedicated to the last Egyptian queen, Cleopatra, famed for her extraordinary culture and intelligence, as well as for her exotic beauty", the deck combines the Egyptian astrological tradition with the structure of the Tarot.

"The Cleopatra Tarot synthesizes the religious and astrological culture of that time, reuniting the 78 Egyptian divinities divided into groups according to their power. "

The major arcana of the Tarot of Cleopatra are linked with 22 ‘superior’ Ancient Egyptian divinities, and the court cards with 16 ‘slightly inferior’ divinities. The four Aces are linked with the three traditional seasons of the Egyptian calendar, plus 'the ascent of Sothis'. The 32 numbered suit cards have been matched with 32 ‘doyens’, which are celestial divinities, associated with the zodiacal calendar by the Egyptians. The booklet explains that these divinities, or 'monthly spirits', were shown in a bas-relief in the Temple of Denderah that dates back to the time of Cleopatra, that illustrates a map of the ancient sky, the zodiac, and the concept of Egyptian astrology.

Visually, the Tarot images are placed inside a teal-blue border and appear on a papyrus-like background, with frayed edges, for an authentic look. The colours used remind me of ancient scrolls or friezes, as the orange-reds, blues, sludgy greens and orange-tan skin-tones paints appear worn, smudged, or rubbed off entirely in areas. The major arcana cards feature the individual deity in the centre of the card, while the minors are busier. They’re not complete scenes as in the Rider-Waite, nor are they pip cards, but they feature people, animals, glyphs, and Egyptian objects in arrangement composed on the cards. (As for the backs, they show reversible designs of an Egyptian women wearing a head-dress and carrying an ankh and a staff.)

The companion booklet is the usual multi-language stapled booklet from Lo Scarabeo. It has the typical short meanings for each card, plus an Egyptian word for the associated deity, season or doyen, and a unique spread for the deck. Here is it 'The Cleopatra Oracle', a divinatory spread that uses 12 cards. An example of the card meanings:

1. The Magician. Toth. Decisional capabilities. Initiative. Diplomacy. An able and well-prepared person. A higher vision of life.
Ace of Swords: Chemu: Spring. Dynamism. Desire to expand one’s own area of action. Over sensitive character.
Five of Pentacles: Aphruimis. Saturn in Leo. A moment where egoism prevails over feelings. A very jealous and at time violent person.


The imagery of the Tarot of Cleopatra seems to have more of a connection to Ancient Egyptian symbolism than Tarot symbolism, and a good knowledge of both would help with these cards. As I’m not an Egyptophile or knowledgeable about their form of astrology, I found it hard to use the cards without constantly referring back to the booklet.

The art production of the Tarot of Cleopatra is of a high standard, but practically, I would recommend it only to experienced readers who have a passion for Ancient Egypt or collectors who simply must have every Egyptian-themed deck available on the market. With decks like this one that merge a complex topic such as Egyptian astrology with Tarot, the end-users would really benefit from a detailed companion book.

When I first opened the new Lo Scarabeo Cleopatra Tarot, it was with great hope. The first card I saw was Bes, as The Fool. How fitting. I remember seeing carvings of Bes in Central and Southern Egypt.

The LWB discusses the Temple of Hathor at Dendera on page 4. “The Zodiac of Denderah, a bas-relief engraved on the ceiling of the temple of the goddess Hathor, dates back to the epoch of Cleopatra. This work, which is the most complete map of the ancient sky is testimony to the union of Egyptian astrology with that of Greece-Babylonia, which began three centuries prior. In fact, the zodiacal signs and the five planets placed in the signs of their exaltation can be clearly recognized.”

I was excited – I’ve been to Dendera – I have photographs of Nuit devouring and giving birth to the sun from the ceiling of the temple. I began to look at the cards and read the LWB….

Then the dismal disappointment occurred. On the surface, a lovely deck with nice blue green background upon which the artwork, created to appear as paintings on papyrus, is laid. Superficially very nice. It is very pleasant to look at.

The images are non-traditional; there is no wheel on the Wheel of Fortune, the Emperor is standing and the Hanged Man is seated, there is no building shown on the Tower, no mixing of water in Temperance, simply figures on images of papyrus. The astrological content and correlation is illustrated on each card.

However, the assignment of the ancient Egyptian deities to the Major Arcana appears at best – to be arbitrary. The LWB will tell you which deity correlates to which card – but the card itself displays only standard nomenclature (although the cards are labeled in six languages, none of the descriptions include the corresponding deity name).

A minimal knowledge of the roles of the Gods, and the ‘accepted’ meanings of the cards reveal that – there is an occasional match. Some deities are simply ‘placed’, and the description in the LWB often has little to do with what the particular deity actually represented.

This formula continues with the minor arcana. Caliches we are told equals autumn. What’s a Caliche? In Egypt, it’s a horse-drawn carriage. And the cards? Oh…on the cards, the suit is Chalices (coppe, copas, coupes, kelche, bekers…six languages). Of course the rest of the suites are Wands, Swords, Pentacles (did they have pentacles in ancient Egypt?). Pentacles equal summer, Wands equals Winter, and Swords equals spring.

Sobek is the ‘Crocodile God’. Sobek worship occurred mostly around the twelfth dynasty around Kom Ombo (upper Kingdom) and Thebes. In Kom Ombo one will find the twin temple dedicated to both Sobek and Horus. He is relegated to serving as the Knave of Caliches (cups). The LWB tells us “A young boy or girl, a student or and assistant. Messages of love. Intimacies.” Excuse me?

One of the duties of Ptah was death; death itself, the moment of death (not the cause). It was said that ‘the instant of death’, was the role of Ptah, who in his cobra –form, spit venom upon you. Anubis was god of the underworld, and ruled over the mummification process, and then Maat judged your life in the afterworld. Ptah was married to Sekmet, the lioness deity who ruled over justice in this world as a ‘war goddess’.

However in the Cleopatra Tarot, Ptah is The World, Anubis is Death, and Maat is Justice rather than Judgement.

The 2 of Pentacles is called Sothis, which was the Greek name for the star that we now call Sirius (venerated by the Egyptians), which the LWB describes as ‘Venus in Cancer’. Bastet (Bast) is relegated to serving as a Queen of Pentacles.

The LWB tells us astrological positions for each card, for example Mars in Pisces is the 10 of Swords, and the deity associated is Atembui, which means – Hedonism, love of pleasures, etc. Non-standard Tarot associations attribute to the majority of the deck.

I was hoping at least to find out some clue about ancient Egyptian Astrology…so I get to the portion of the book where it discusses how to read the cards, and further disappointment set in.

We are told that we should shuffle seven times and cut with the left hand (obviously this writer has never ever visited an Arabic country), and there is no mention of Egyptian Astrology.

Truly, this the most dreadful deck I’ve seen in ages. It really presents nothing new, and in my opinion, the entire concept appears invented and passed off as ‘something special’. Most of the Deities mentioned in the LWB are from the 12th to the 20th Dynasty, a period roughly spanning 1991 BC - 1069 BC. Cleopatra VII, the last Ptolemaic ruler, died in 30 BC; and there is evidence she did attempt to revive the old religions – but the deck has nothing to do with Cleopatra.

The final example of how dreadful this work is comes from the LWB page 4, “Cleopatra, heart-broken by sorrow, took her own life”. Okay – historically inaccurate. Cleopatra knew that Octavious was on his way to kill her after the defeat at Antium. She contracted to move part of her navy (60 ships) overland to the Red Sea, and escape to India. The Nabataeans, who owned the southern trade routes, denied passage and burnt Cleopatra’s boats. She was marked for death at the hands of the Romans.

Had this deck been marketed as an Egyptian Papyrus Art Tarot with no LWB it would have been acceptable. As it is, well…the backs are lovely.


Complete Details of Tarot of Cleopatra


Similar Decks to Tarot of Cleopatra