The Etruscan Tarot is a historically-themed art deck, based on the culture, civilisation, and mystical beliefs of the ancient Etruscans, a pre-Roman tribe who lived in what is now modern day Italy.


Card Images from the Etruscan Tarot 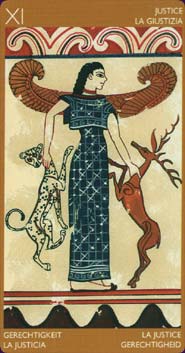 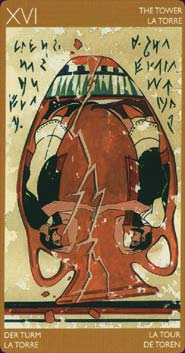 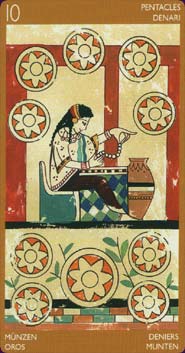 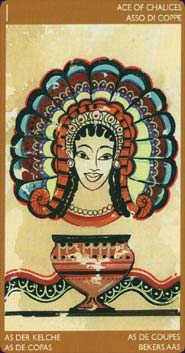 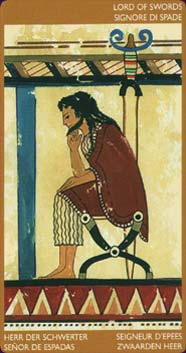 The Etruscans were an ancient tribe who lived in what is modern day Tuscany and Campagnia. They were a major power in pre-Roman Italy up until the fifth century BC, their culture rivalling the Ancient Greeks. After this time the Etruscan people, language and culture were gradually assimilated by the Romans, until little remained to distinguish the Etruscans as a separate people. Only traces of their existence remain today. As very little of the Etruscan language has been deciphered, most of what is known about these people is reconstructed from archaeological artefacts and Roman writings.

Silvana Alasia, known for creating tarot decks such Nefertari's Tarot and the Egyptian Tarots, was the iconographic researcher for the Etruscan Tarot. The cards have been created in the style of Etruscan art, but modified to fit the tarot structure where necessary. There seem to be similarities to Ancient Egyptian papyrus painting in perspective but with more life, more passion and movement, less rigidity. (Angles of the human body are sometimes odd, in the case of early cards like the Fool and the Magician, but appear much more three-dimensional throughout the rest of the deck.) The card art also recreates the ancient look, the paintings appearing as through pigment has rubbed in patches with age.

The cards seem to show a joy of life, a contentment and happiness of the simpler pleasures. The cards have many natural elements - snakes and birds appear often and almost every card shows a stylised tree or plant. The scenes are uncluttered and down to earth. Both male and female nudity is commonplace, a normal and unremarkable part of life.

The Wands are living boughs, sprouting leaves. Cups are wide-rimmed chalices with red and black decoration. The orientation of the cup changes depending on the card's meaning - the 2, 3, 9 and 10 are all upright, whereas the 4, 5, 7,8 are mixed upright and reversed. Pentacles are a seven petalled flowerlike symbol enclosed in a circle. Swords are long and tapered with decorated handles, coloured and ornamented by a curling decoration at the base of the handgrip. (A sword, which seems more a ceremonial decoration than a fighting weapon.)

The little white booklet has no divinatory meanings, just simple, practical descriptions of the card's surface symbols, For example, 'XIX - I seek the light. A god of the Sun is waking up, surrounded by light. The Sun.' or '5 of Pentacles - A naked boy is gathering olives fallen on the ground.' This leaves the reader to decide on the significance of the picture. The booklet also has two novel spreads, the Tomb and the Banquet. The Tomb is a spiritual excavation of the inner self and innermost secrets, while the Banquet is a joyous spread for finding spiritual happiness and contentment.

While perhaps a little obscure for the absolute beginner with its simplified and Etruscanised art, the tarot archetypes essentially familiar and this art deck should be accessible by most tarot readers. Read the tarot, and learn about a lesser-known ancient culture at the same time.

This is meditative deck, with artwork inspired by Etruscan designs. When looking at art from Greco-Roman times, the intermingling of the Aegean Sea communities, Greece, Rome and even Egyptian artwork shows up in vases, frescos and other ruins found from the edge of African and Egyptian societies to places near Greece and Italy.

Silvana Alasia is known for her Egyptian designs, most notably the glorious gold Tarot of Nefertari. Her choices of designs for the Etruscan may be familiar to you if you look at books that show Greek vases. For example, my old Ancient and Classical Art by P.P. Kane from Dell Pocket Books showed details that helped me identify some of the sources of the Etruscan Tarot card designs. I could identify figures from Card XI Justice and Card XII The Hanged Man in the designs of the handle of the Francois Vase circa 578 BC from Chiusi, Italy (present day Etruria).

Card XI is Justice with a lion and deer being held by a blue-robed winged goddess. In the Francois Vase, winged goddess is identified as Mistress of the Beasts holding two cat-like lions. The art history book suggests the winged goddess came from a near eastern motif that came through Asia Minor and Crete into Greece--she was originally called Potnia Theron, but later became associated with Artemis. The scene below the Lady of the Beasts in the Francois Vase handle was identified as Ajax carrying Achilles. The Ajax scene is similar to Card XII, The Hanged Man in the Etruscan Tarot. In the Etruscan Tarot, Ajax is the lighter-skinned warrior and carries the black, wounded figure of Achilles. Note the Greco-Roman convention of having women of lighter hue than the males is followed in the Etruscan Tarot cards.

In Card XIII the Death scene is represented by Achilles, a black-figure with a red-trimmed helmet and cloak, crouched over a gaming table. He holds four wands, which showed his winnings. In a black figure vase from my Cambridge Art University Press book by Mark D. Fullerton, the full scene is Ajax and Achilles both crouching over the same table. The Cambridge art book notes that Ajax is the second-best warrior and called a three instead of the four chosen by Achilles.

I've only begun to explore this deck and found the majors numbering is similar to the Rider-Waite. The Little White Book (LWB) is very good at explaining highlights of Etruscan discoveries and suggesting two meditative spreads. I was very intrigued by the way it lists the majors with a suggestive phrase, a description sentence and then the title of the card. The minors are noted as Pentacles, Wands, Chalices, and Swords. Each Ace of the suit has a mask. A Mask of Good Fortune is for Pentacles, a Mask of Sensual Life for Wands, a Mask of Beauty and Joy for Chalices and a Mask of Wild Fate is for Swords. Each suit has scenes and titles on the card and a written descriptive line in the LWB. The sunny warm tones of the card borders are enhanced with a soft lighter creamy coloring of the backgrounds behind each figure/suit symbols. The numbers and titles above and below the scene are typed nicely, but easy enough for me to read. The backs have a interesting and reversible white lacy design on the amber/orange backs.

As an art theme deck, it's well done in symbolic depictions that would be typical of ancient times. I look forward to exploring it more and using it as a companion to any reading on Greco-Roman topics.