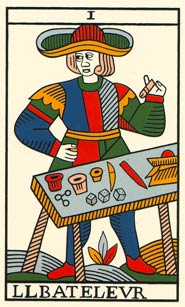 The Jean Noblet Tarot is a Marseilles variant from 1650, restored and with a few missing cards added by French Tarot historian and artist Jean-Claude Flornoy. The deck has 78 cards and a useful 64-page booklet in a cardboard box. 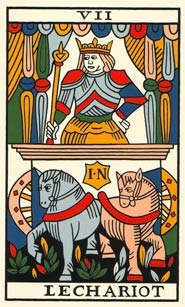 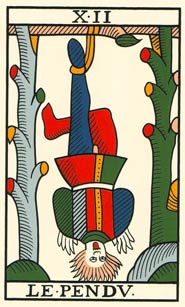 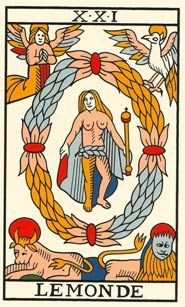 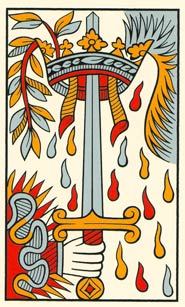 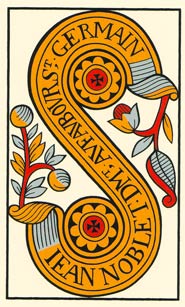 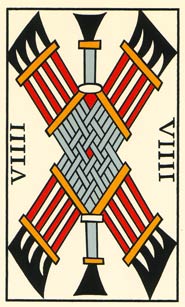 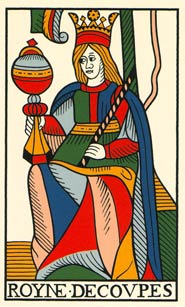 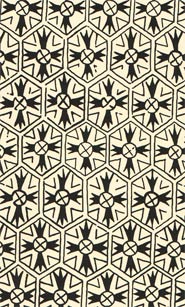 The "Jean Noblet Tarot" is thought to be the oldest known of the Marseille-style Tarot decks, originating in Paris, c. 1650. The only existing copy of this deck is currently preserved in the French National Library in Paris. It is a nearly complete deck, missing only the Six through Ten of Swords. This 78 card edition is a restoration done by noted French Tarot historian and artist Jean-Claude Flornoy. The missing cards have been recreated by Flornoy in conformance with the remainder of the deck, and after consulting contemporary designs.

The current edition of the "Jean Noblet Tarot" consists of a full 78 card deck, along with a 64 page pamphlet (which is available in either English or French). The LWB (Little White Book) includes a history of the Tarot, an overview of the background of the "Jean Noblet Tarot", and commentaries on the Major Arcana. The commentary represents Flornoy's personal work, entitled "Journey of the Soul". It is not about keywords, or what the card might mean in a reading, but about each card as it appears on the Seeker's personal Journey.

Flornoy presents a very fluid picture of the history of Tarot, which began as a form of game. Two different traditions are presented: the "Milanese tradition", which Flornoy describes as being the Tarot of "Marseille", referring to a style, rather than the city, and being represented by the "Jean Dodal", the "Jean-Pierre Payen", and the "Nicolas Conver" Tarot decks. The second tradition would be the "Piedmontese" tradition, that of foremen, carpenters, architects, and stonecutters, also known as the "Tarot of Bologna", and in its early form represented by the "Jacques Vieville Tarot". Flornoy notes that a third tradition appears at the beginning of the 15th century, that of "artistic and fantasy" Tarots.

On the "Jean Noblet Tarot", Flornoy presents a very interesting commentary on the cards. On Noblet himself, Flornoy makes the statement that that he belonged to a time when knowledge was still transmitted from master journeyman engraver to his apprentice. Something that I was not aware of was that there were seven symbolic colors used in decks: white, the color of emotional saturation; black, representing the earth; red, representing blood and suffering; blue, representing blows to the body and soul; yellow, representing perseverance; green, representing hope; light blue, representing awareness; and the additional flesh color. The verse sung by the Compagnons du Devoir regarding color has also been included in the LWB ... I am going to leave it to the reader to read for themselves. My thoughts, after reading this section: a deck that is restored by someone with an historian's bent gifts the user with much more than nicely done cards, it gifts them with historical tid bits that are priceless.

Flornoy, in his "Journey of the Soul", breaks the Major Arcana down into five groups: Childhood, Apprenticeship; Compagnonnage (fellow craftsman or journeyman builders and artisans who have attained a high level of competence in their work); Mastery; and Wisdom, who is "throned", or placed, in the center. Each group is introduced by a door, or "gateway". The Fool stands alone. There is an impressive template of how this is laid out on Flornoy's site.

The section on reading the Tarot certainly has some points to think about. For instance, the reader is advised not to read for themselves, and to avoid, as much as possible, reading for those that they are emotionally close to. The method that is presented for reading is that of a cross - similar to the Celtic Cross method, but using only five cards. The vertical line represents "being", while the horizontal line represents "becoming". To the left is the past, and the energies that activated us; to the right are those energies that are either active, or about to become so. The center card represents synthesis, and is defined by adding the numbers of the first four cards drawn. (If the card is over 21, it is reduced.) A reversed card is described as incomprehensible, and that difficulties prevent the upright state of the card from being accepted by the Seeker. Note: Although this is a 78 card deck, the method for reading stipulates that the 22 Major Arcana only be used.

Each of the 22 Major Arcana is presented, text only, no images. The energy of the card is discussed as a point in the Seeker's journey. From the LWB:

"I The Bateleur - gateway to childhood

A being wishes to come into the world: the earth breathes him in, he incarnates...here is the Bateleur. He is in a state of total consciousness, entirely linked to the world surrounding him. He perceives this world as an earthly paradise.

The form of his hat evokes the symbol of infinity: the infinity from which he emerges, the infinity of his consciousness. He looks to the left, to the past, expressing nostalgia for his pre-incarnate state.

There are only three legs to the table in front of him: this being walks on only three legs, he limps. He has a fracture which he will feel for most of his life. On the table, one sees the objects that represent the young person's potential. Among them, Jean Noblet's tarot includes dice to emphasize the chance aspect of incarnation. At this stage, everything is still possible; no one can predict how his life will evolve. The disparity of objects before him expresses this. The young Bateleur is a magician ready to draw a life from out of his hat.

In his right hand, the figure traditionally holds an acorn, the fruit of the Druids' sacred tree. Already in this first trump, the master image-makers insist that tarot is the fruit of ancient knowledge.

The wand generally held in his left hand symbolizes intuition, the magic capacity to perceive and transform. The Bateleur stands at the entrance to life. These are the elements with which he must juggle in the great game of existence."

One small note about the LWB: It is of sturdy quality, and opens the short way, rather than the long way. For me, this makes for easier reading.

The box the deck comes in is an art form in itself. The top of the box includes Jean-Claude Flornoy's information and address, while the bottom includes copyright information. The front and back show a light colored background, with the imagery from the King of Pentacles on the front, and the Bateleur on the back. The sides present information on the deck itself - one side in French, one side in English. Kudo's to Robert Mealing, who designed the box! All in a sturdy cardboard that will withstand the test of time.

The deck itself is a nice size for small hands - approximately 2 1/2" by 3 7/8". The cardstock is sturdy and glossy, with squared corners. The backs show a black and white pattern - it would not be possible to tell if a card had been drawn upright or reversed.

The card faces for the Majors show a light colored background, with a thin black border around the imagery. The card number, in Roman numerals, is on the top of the card, while the card title, in French, runs across the bottom of the card. (Note: The LWB refers to the cards with their English titles.)

The titles, in French, are as follows:


*Flornoy notes that the "Jean Noblet Tarot" is the first deck to identify Death as such. Prior to this, the card was left unnamed.

The Minor Arcana show a light colored background, with white hands and faces on the figures. A thin black border surrounds the imagery. In true Marseille style, the Pips (numbered cards) show only the suit icon with some slight embellishment, but no scenes. The numbering for the Pips is along both sides of the card, but it is inconsistent.

For the Wands, the Ace is unnumbered, numbers Two through Ten are lumbered on both the right and left hand side.

For the Swords, the Ace of Swords is unnumbered, with cards Two through Ten numbered on the right and left hand sides of the card. The Swords are show as curved, with the odd numbered sword placed in the middle, and being straight.

Both the Two of Cups and the Two of Swords show the name and city of origin for Jean Noblet (noting him as the maker of the deck). Look closely at the shield on the Chariot, and you will see the initials "I.N." for the engraver - Jean Noblet.

Some of the interesting things that I noted in the Major Arcana were the condition of the Fool, with a cat-like figure at his heels (as opposed to a dog), and the male figure in the Lovers appearing to be held in mid air by the female figures on either side of him (with a blindfolded cherub, bow and arrow in hand, above them). The commentary notes that the women simply each have a hand on the male figure, but I thought that I would share my initial impression, as it was amusing.

This deck is for all levels of student, from beginner to advanced. It brings wisdom to those that know the Marseille style Tarot well, and it acts as a wonderful teaching tool for those, like myself, that do little work with this style of deck. The restoration is impeccable - I cannot recommend this deck highly enough. As an aside, there is also a hand colored version of the Jean Noblet Major Arcana! I also recommend visiting the home site when working with this deck - the journey is worth the time spent there.