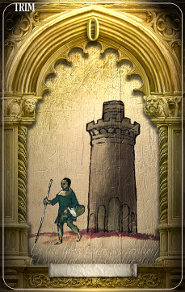 The Lost Tarot of Nostradamus is based on the mysterious tarot-like drawings believed to have been created by Nostradamus, and only rediscovered in 1994. John Matthews of the Grail Tarot and Wil Kinghan of the Shaman's Oracle worked together to create this original 78-card deck.


Card Images from the Lost Tarot of Nostradamus 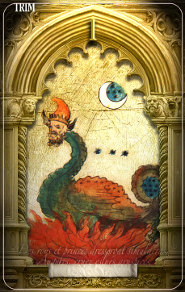 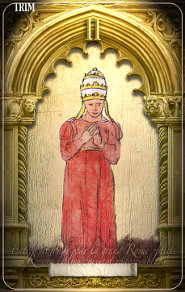 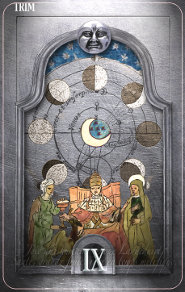 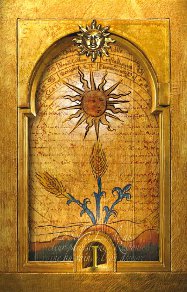 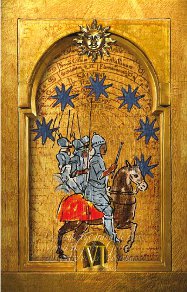 “The Lost Tarot of Nostradamus” is a 78 card Tarot deck written by John Matthews and illustrated by Wil Kinghan. This deck is published by Tuttle Publishing. The cards measure 2.75 x 4.75 inches and the backs are reversible.

This set comes in a compact hardcover box with lift off lid. The cards fit snugly in a plastic divider and the book lies on top of them – there is no wasted space. The box is durable and easy to store, which is a nice bonus for collectors. The cardstock is moderately thick and it’s sturdy enough for worry free shuffling. The cards are a comfortable size and the lamination isn’t overly glossy.

The companion book for this deck is 160 pages of informative material that is well worth reading from cover to cover. It explains the concept for the deck, the process of its creation, and presents facts about Nostradamus. There is a description of each card in the deck, a collection of spreads with examples, and a meditation. Fascinating historical tidbits can be found throughout the book as well.

One of the spreads I really enjoyed invites you to answer a series of questions and then see how the corresponding cards relate to your answers. I think this method is an excellent introspective technique and I’ve enjoyed experimenting with it.

The artwork for this deck is composed of images from The Lost Book of Nostradamus. Kinghan explains that since it was not possible to use high quality photos of the original illustrations, he recreated them digitally. Being faithful to the original material was an immense undertaking and Kinghan accomplished this with respect, sensitivity, and care. The art feels antiquated and appears as though it was extracted from an esoteric text. The mood that this deck evokes is delightfully mysterious and cryptic.

The Majors and each of the suits have a different border, and this appears slightly more computer generated and polished than the illustrations themselves. If you are not a fan of large borders this may be a turnoff for you. However, the borders for this deck are meant to frame the images, and they are useful for identifying the card. The imagery in this deck is very nontraditional; therefore the numbering, suit symbols, and colors incorporated into the borders are a welcome addition.

John Matthews explains that many images from The Lost Book of Nostradamus bear a resemblance to Tarot imagery and that these exciting parallels inspired the creation of the deck. Matthews admits that it is impossible to know for certain that Nostradamus was in the process of creating his own Tarot, but there was enough evidence and content to work with for a complete deck to come to fruition.

Some of the illustrations fit very well with traditional Tarot themes and are easily recognizable, such as the Tower and The Fool. Others, especially those that were chosen for the Minors, depart drastically from familiar depictions. I appreciate that Matthews and Kinghan opted to only use images from The Lost Book to keep everything as authentic as possible, but this does make the deck a bit challenging to decipher or feel slightly contrived at times.

Fortunately, the companion book explains some of the obscure symbolism and most of the card meanings retain traditional themes, or at least a few concepts and essential components from them. That being said, this is a Tarot that will require some study, especially if you want to fully appreciate it. If you read for others they may have a hard time relating to what they see on the cards. Readers who encourage the client’s impressions of the imagery may want to take this into consideration.

The Minor Arcana consist of Suns (Wands), Moons (Cups), Stars (Swords), and Spheres (Earth). The Major and Minor Arcana also have correspondences to metals. The Majors are gold, Suns are copper, Moons are silver, Stars are mercury, and Spheres are lead. The border color for each suit matches the corresponding metal, so it’s fairly easy to remember. The Minors are also numbered I- XIV to minimize confusion with the renamed court cards.

The court cards are another complex but thoughtful element to this deck. Each suit has a different hierarchy of people to represent its ranks. For example, the suit of Moons is represented by occultists and philosophers. Its court cards are Neophyte, Initiate, Prophetess and Master. The court cards for the suit of Stars are comprised of religious figures, and its ranks are Postulant, Cardinal, Abbess, and Pope. Whether or not this suit specific system of personas makes the multifaceted nature of court cards more or less confusing will depend on the reader. I personally enjoyed the concept because the titles correspond to the theme of the suit and this creates a more distinct energy for each court card. However, I can see where the numerous changes in structure and symbolism could create unnecessary or confusing intricacies.

Caitlin Matthews’s work on this deck deserves a great deal of recognition. She has translated the quatrains from The Prophecies of Nostradamus, and from these translations the creators chose couplets to pair with each card in the deck. I liked that the event associated with the prediction is included for the Major Arcana couplets. The pairing of Nostradamus’s words with the cards adds an extra layer of complexity to the deck, and you are invited to put the couplets from the cards in your readings together to see if anything useful comes to light.

This is a great deck for collectors. There’s nothing else out there that is quite like it. The research and dedication to the project creates a great deal of depth and meaning that warrants respect and appreciation. This may not be a go to deck for regular readings, but its mysterious energy and information packed guidebook are a treat for Tarot lovers and collectors. If you are looking for a Tarot that isn’t afraid to break the mold, this might be just the deck you are looking for.