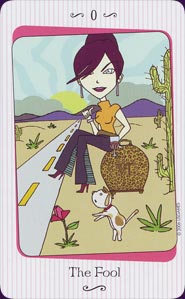 The Vanessa Tarot is a cute, sassy, and glamorous deck inspired by pop culture heroines. It's light-hearted, fun, feminine and still very readable deck for the girl in every grown woman (or man). Packaged with a small tin along with a booklet.


Card Images from the Vanessa Tarot 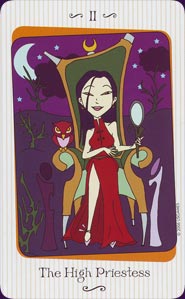 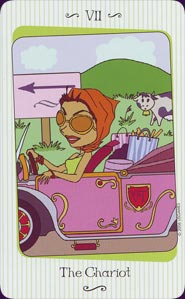 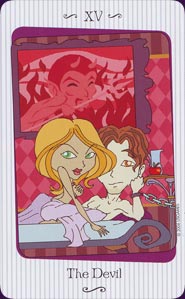 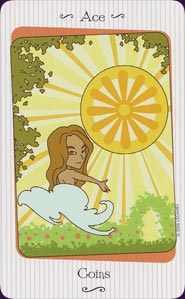 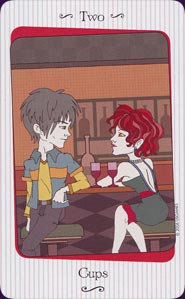 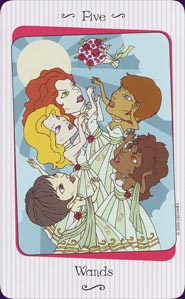 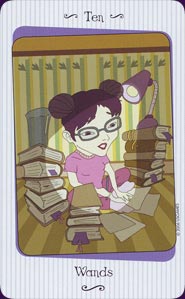 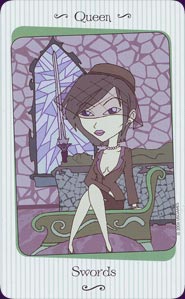 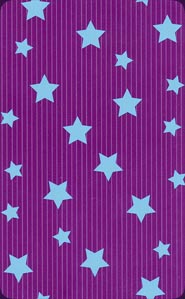 The Vanessa Tarot does for illustrated pip Waite-Colman-Smith based decks, what Major Tom's Tarot de Marseille did for the Marseille version Tarots, and dragged it (the Tarot) into the 21st Century.

The Vanessa Tarot will perhaps be the most overlooked Tarot of 2007. ‘Serious’ Tarot folks will eschew it, many will never get past the Magician – and will poo-poo it as a silly novelty.

But the Vanessa deserves a closer look. It’s nothing short of brilliant!

Let me start with the LWB – it deserves framing. This should me the new standard for LWB’s. It is well written, concise, and is arraigned by numerical value as opposed to suits. And what is said about each card – makes sense.

Some folks enjoy saying ‘Tarot is a language’, perhaps because such a statement eludes cogent response, However the Vanessa Tarot IS a language.

Gone is the weighty esoteric symbology, leaving behind clean image concepts – that translate smoothly into nouns, verbs, adjectives, adverbs and articles. Many cards easily fill encompass several of those labels.

Yes, it’s a feminine deck albeit not feminist. Marketing may well relegate it to the early teen female market segment of the populations, and that’s a shame.

The deck is also multicultural.

Some examples: The 10 of Wands eschews the burdening issues and displays an attitude of study – or ‘workload’. The Knight of Wands wears a parachute and stands in the doorway of an aircraft in flight. In the Four of Cups, she sits in front of the Tarot Café, while a hand enters the picture from the left offering a cup. It's tres mondo coolaroonie!

The cards measure 9.5cm x 6cm, perfect for your hands, and get this…they come in a metal case.

This deck, and the LWB rock…

“Inspired by pop culture heroines of television, cinema and comic books, the charming power chicks of Vanessa Tarot are all glammed up and ready for life’s adventures.”

The Vanessa Tarot is a glamorous and feminine interpretation of tarot into completely modern scenes and symbols. Created by talented Filipino illustrator and multimedia, Lynyrd Narciso, creator of the Sailor Moon Tarot and Tarot of the Lepidopteran People, it is his first deck to be picked up by a major publisher: US Games.

The deck has been inspired by the heroines of pop culture (Jackie O and Sophia Loren are two recognisable women) and is wholly female, glam, young and modern in all its aspects. The cards were originally inspired by dolls, and in places the women retain a slightly big-eyed, big-headed anime look, but the colours are anything but lady-like, instead using rich, deep colours. They’re also images of put-together, strong, capable women. They are judges in Justice, beauty queens in the Universe card, warriors in the Seven of Wands, and fashion designers in the Three of Coins. They ride motorbikes in the Knight of Swords, drive their own sports cards in the Chariot, and bake in the Kitchen in the Magician.

The women of the Vanessa Tarot almost entirely inhabit modern scenes and life in a way few decks have managed. It’s not a tarot with a few contemporary scenes mixed in with the usual medieval Christian or occult symbolism, but a tarot that has been translated completely into modern lifestyles and references. Its illustrations include a Knight of Wands, poised to parachute out of a plane; the Knight of Swords riding a motorbike; the Ten of Wands, where a student works at a desk piled high with books, lit only by the glow of a desk lamp.

The cards have the Rider-Waite tradition at their foundation, but often move the scenes towards their more literal interpretations as well as more modern ones. The Queen of Swords in the deck is a veiled woman at a funeral; she is literally the widow or aloof woman. The Seven of Swords removes the ambiguity and shows a woman in the midst of a burglary, getting away with the safe.

The whole Vanessa Tarot set is a beautifully designed package of 78 small, matte, and easily-shuffled cards, 2 title cards, and a similarly small 32-page booklet, carried in a very durable purple tin box (not cardboard!) with a separate lid. Perfect for keeping in handbags, backpacks or purses.

Inside, the cards are about the same size as playing cards and fit easily in small hands. They are easily shuffled as they have a much more matte cardstock than is often usual for decks from US Games, and lack that tendency to slide off the table like a waterfall. The backs of the cards have a simple and reversible design of a purple background with blue stars and thin blue vertical stripes.

I’m a big fan of the Vanessa Tarot and its fun, feminine yet strong approach to tarot, without being flowery or fluffy. Lynyrd has translated conventional tarot scenes into more relevant scenes of contemporary life, making a deck that is easy for beginners to use and relate to without having to deeply delve into the study of tarot symbolism.