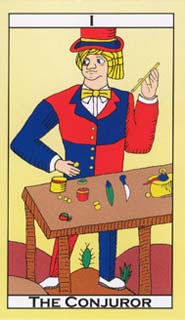 Major Tom's Tarot of Marseilles is a unique deck based primarily on the iconography of the Dodal Marseilles, but with a modern twist in dress and attitude. First printed in a limited edition of 50 decks during the 2005 Melbourne International Tarot Conference, it's now also being published by Schiffer Books.


Card Images from the Major Tom's Tarot of Marseilles 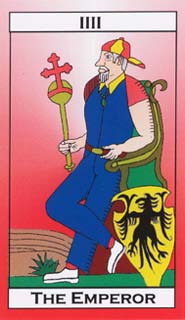 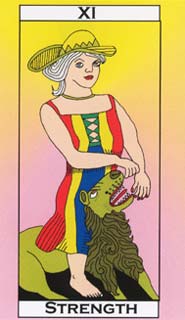 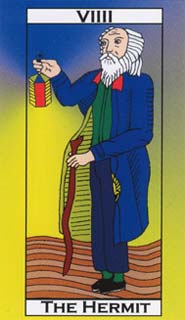 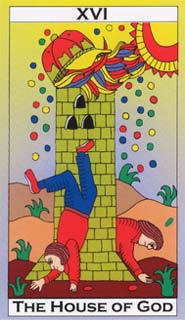 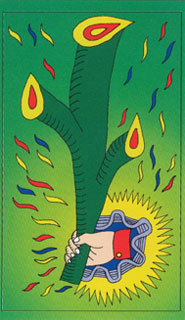 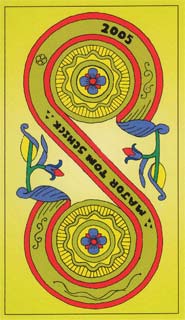 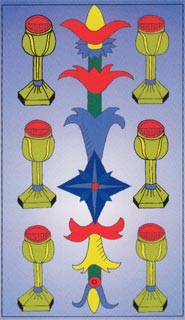 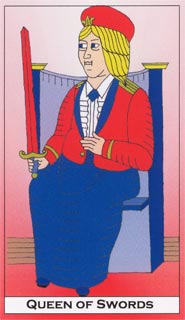 Major Tom Schick's inspiration for his modern Marseilles cards was the historical French style of cards, known in English as the Tarot of Marseilles and dating back to the early eighteenth century. His concept was the remain as true to the Marseilles iconography as possible, while translating their dress from the medieval European style to what they could be wearing today - and making it more relevant and accessible to a modern audience.

Tom studied several of the many Marseilles variations available; primarily the Dussere Dodal, but also Kris Hadar's Le Veritable Tarot de Marseille, the US Games/Carta Mundi version of the Tarot de Marseille, the Conver published by Heron, the Fournier-published Le Tarot de Marseille, and original images available in libraries online. His cards stick as closely to traditional titles as possible, while being predominantly in English, instead of French. The suits are Batons, Cups, Coins and Swords; the courts are King, Queen, Cavalier and Valet. The trumps, in order, are:


Much of the original symbols have been retained - but what makes this deck different from other Marseilles reconstructions and clones are the costumes of its people and their familiar modern dress. Instead of crowns, they wear baseball caps or berets. Justice wears the judicial wig, the King of Coins wears a suit and tie, the Cavalier of Batons wears a cowboy outfit, the Valet of Swords looks like a drill sergeant, the Valet of Batons looks like a builder or construction manager; he wears a hard-hat and ear protection, and the Cavalier of Coins is dressed in formal English riding wear and is dressed for dressage - most appropriate for this card as it's a very controlled and precise sport! My personal favourite cards (not only for their dress) are the Hermit, a wise old teacher with a steadfast expression and half-smile, the Ace of Wands (such fabulous colouring), and Strength's calmness.

Tom's deck began in December 2003 as part of the 78 Weeks of Tarot study on the Aeclectic Tarot Forum. His images were created by drawing in pencil on A4-sized paper, and then the sketch was traced over with a roller-ball black pen. The image was scanned, and, in Photoshop, cleaned and coloured. The final result retains the woodcut look, but with far stronger hues and blends: the foreground figures and images are mostly saturated primary colours, while the backgrounds are usually computer-generated attractive two-colour blends. The Batons have backgrounds of vibrant grass green, Coins are yellow, Cups have a pale to mid-blue blend, and Swords are red to white.

Completed by July 2005, the finished Major Tom's Tarot of Marseilles was published in an amazingly quick turnaround time during the 2005 Melbourne International Tarot Conference - just fifty decks were made in this limited edition printing. The Two of Cups in the Conference limited edition also has a special banner with 'Melbourne International Tarot Conference July 2005' and the web address of the Association of Tarot Studies, the organisers of the conference. (Image quality on this card is unfortunately slightly degraded compared to the rest of the deck, as the text was introduced onto an existing PDF file just before publication, and it was then printed at the screen resolution.) The cards are rectangular, without rounded corners due to the short printing timeframe and extra costs they would have incurred. The cardstock is glossy but unsealed, and the backs have a greyscale, reversible design of the lion from the Schick coat of arms.

Not being a big fan of Marseilles old-style imagery in the past, I thought Major Tom did an excellent job in updating the colouring, the costuming, and the deck's relevance to contemporary life. If you had thought the Marseilles imagery was hidebound by tradition and less than appealing -- take another look it through the lens of Major Tom's Tarot of Marseilles.

I don’t live in the mid-eighteenth century, and apparently neither does Major Tom Schick, creator of the Major Tom's Tarot of Marseilles.

There is a strong sense of color awareness displayed throughout. Each of the suits has its own hues, backgrounds of pips variegated in intensity. Brilliant eye-candy.

As a reader, I find the updating of the clothing is nothing short of brilliant. The Courts become familiar and approachable (the Valet of Batons is unlabelled). The X of Batons has the last two batons woven from the perpendicular and the horizontal, and the X of Swords has the last two woven upwards, and the right laying upon the left... nice work. The Fool is unnumbered and XIII is unnamed (two thumbs up there).

Major Tom has taken a bold step in his treatment of presentation of the Majors. The Magician is brightly colored, his multi colored costume and hat, standing before his table – he could easily be a huckster at a fair or carnival, pitching his nifty wares, "It slices, it dices, isn’t that amazing – but wait – that’s not all..." And then Major Tom gives us The Papess; caped, in her bikini top and skirt and the ubiquitous tome on her lap... she could be a trapeze artist, a hoochie-coochie girl, a Vegas showgirl, or a priestess…ready to get up and perform. It helps create a unity yet separateness between these first two cards and the next two (or three), which I find important.

I love the wigged Justice…

I think it’s a brilliant deck – and exceptionally readable. Like I said, I don’t live in the mid-eighteenth century... Major Tom's Tarot of Marseilles is the Tarot de Marseilles of and for the twenty-first century.