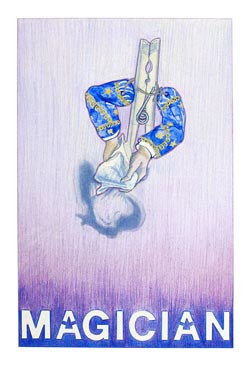 In the Clothespin Tarot, domestic and low-tech items take on human form in 78 detailed watercolour and pencil drawings. Self-published as a handmade collector's item, the set includes the deck, an 86-page companion book, and a Clothspin Freak sculpture, all in a cloth-bound slipcase. It's a limited edition of 50 sets.


Card Images from the Clothespin Tarot 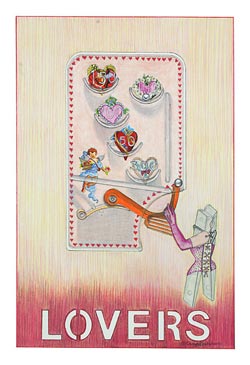 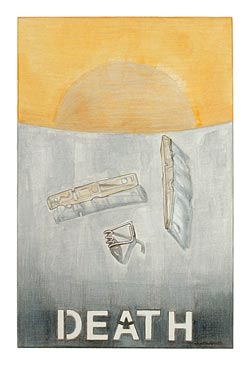 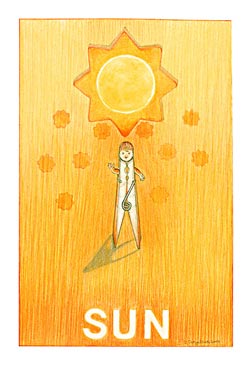 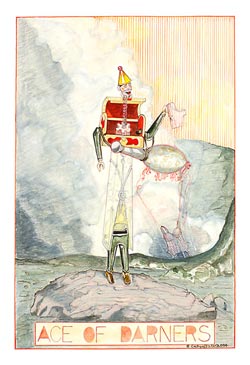 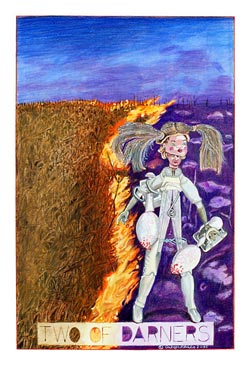 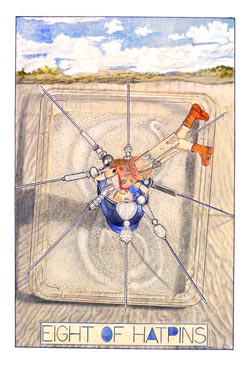 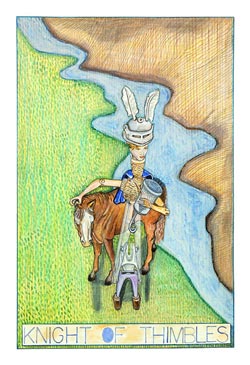 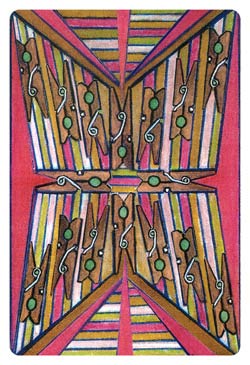 Clothespin Tarot by Catya Plate is housed in a slipcase with three compartments, holding the book, the card tray, and an original “Clothespin Freak” sitting figure which has movable parts and consists of custom-made clear, plastic clothespins, doll’s body parts and sewn pieces. The tray of Tarot cards contains two compartments housing 78 cards with all created on an Epson Inkjet Printer, with a Velcro closing to keep the cards in place while sliding out the tray.

Embroidered letters and the “Clothespin Freak” appliqué is attached to book cover and spine. There are 79 color reproductions of the artist’s original drawings printed, one-sided, on 87 pages. Now if you are still wondering what this “obsession” with clothespins involves, it really does not reflect the standard association of woman’s task of doing the laundry and hanging the clothes out to dry. Instead, Plate sees the clothespin relating to the human body. Emphasizing the small and unassuming things in our normal lives, rather than the technological advances which have come to dominate our lives, the Tarot cards are inventive, ingenious, and each card centers on a clothespin doll with manifestations of the original Tarot card implications. The Darners, Thimbles, Hatpins, as well as cards with Hanged, Death, Priestess are all created with the metaphor of clothespin. This is more than a Tarot Card set, it is a thinking artist’s project to philosophize, criticize and analyze the use of one symbol to demonstrate all the potentials of the symbols of Tarot.

Flitting between comedy, children’s book illustrations, and Blake-like mysticism, the cards show a labor-intensive project which is manu-factured (made by hand) by a seasoned artist, whose sense of humor and sarcasm is enlightened by what she is doing with an age-old fortune-telling device and just with living and experiencing what life has to offer.

The evolution from Clothespin Mandala drawings each bordered by a fringe of actual wooden clothespins to these Tarot drawings which introduce anthropomorphic figures arranged in various traditional Tarot card poses seems quite logical. Included are subversive principal characters rebelling against the establishment of the “suits”. Instead of swords, wands, coins and cups, the 56 Minor Clothespin Freaks make use of hatpins, darners, buttons and thimbles, alternative implements characterized by their feminist references. To use the deck, shuffle it well, select a card, turn it over and consult the text on the page for that card, taking into consideration the card’s orientation. And no particular spread is required.

What is intentionally humorous, sarcastic, and serio-comic is the text accompanying each of the 78 drawings. Paragraph one is a description of the corresponding picture. The next two parts are the interpretation for normal and inverted orientation fo the image, delivered to the reader in by the artist’s invention, the two-headed Clothespin Freaks. “After all, two heads are better than one.” The advice is colored by wordplay, double entendres and idiomatic expressions, influenced by cultural, psychological and other references to produce open-ended, amusing and thought-provoking allegories.

As a result, this book is serious, playful, comic, tongue-in-cheek, and a game at that. It is to be played, with credentials of credibility, outrageousness, and delight. It is a game, a hint at the game of life, a game of chance, a game of hope. Each reader will take it as it comes, or make it happen in a different way by reading and indulging in this bookwork and in this game. The work is a totality, from concept to execution, made by one uncanny artist who has more talents than one can imagine.

For all contemporary artist book collections, for Tarot card collectors, for feminist collections, and for all collectors who delight in something different. $650.00, ed. of 50. Distributed by Vamp & Tramp and by Booklyn.