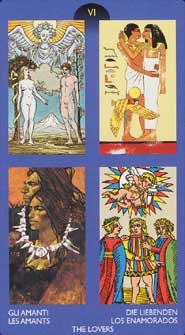 Not for beginners, this is a tarot study tool created to illustrate Valerie Sims' Comparative Tarot reading method. Images of four different decks are depicted on each card - the Universal Tarot, Tarot of the Origins, Tarot of Marseilles, and Tarot of the Sphynx.


Card Images from the Comparative Tarot 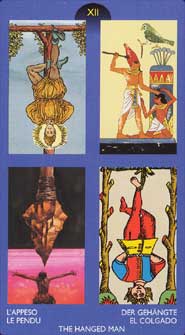 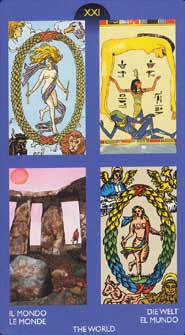 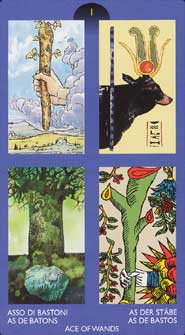 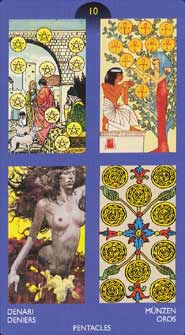 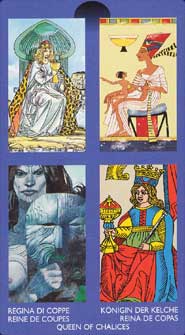 The Comparative Tarot deck is a deck whose time has finally come. Comparative Tarot is an in-depth process named and pioneered by Valerie Sim, who was involved in the design of this deck and also wrote the little white instruction booklet (LWB) for it. Briefly, the Comparative Tarot method involves comparing the same card from several decks for additional nuances and insight into the meaning of any given card or cards in a spread. As Sim melodically writes, while "each deck possesses its own unique voice," all good decks "simply sing a variation of the same song," and "add to the overall tune."

Thanks, however, to this new deck, there's no need to have a cacophony of sounds, i.e., more than one card lying on one position of a spread while we frantically thumb through more than one LWB. Good grief!

And why not? Because every card in the Comparative Tarot deck depicts beautifully colored images from four different decks. Each card is essentially divided into four quadrants, with four pictures, one each from the Universal Tarot, The Tarot of the Sphinx, the Tarot of Origins, and the Tarot of Marseilles. The Universal and Tarot of Marseilles decks may not be exactly like the ones you're used to because they are variants of those decks produced by Lo Scarabeo, who produced the Comparative Tarot deck. The names of the cards and the explanations in the LWB are in five different languages English, Italian, Spanish, French, and German.

For each card, the LWB presents five keyword statements (several single words or phrases). The first gives the core meaning for the card, followed by a list of keywords for each of the four "sub-cards" shown on the basic card. For instance, let's look at The Fool, a card we probably all know too well in our own lives. Sim gives the keywords for the core meaning as "beginning, new phase of life." The Tarot of Marseilles' keyword is that of a "seeker of experiences." The Universal Tarot meaning expresses "craziness; unconventional behavior; eccentricity; faith," while that of the Tarot of the Sphinx is "travels; spontaneity." Finally, the key phrase for the Tarot of the Origins is "a peak experience."

Certainly each of us will have our own favorite keywords, and there is no reason we can't use them instead of Sim's. Many will wish that Sim had included more information for each card, but I do personally know that she was constrained by a word limit imposed by Lo Scarabeo. Nothing prevents you, however, from creating some additional or even new keywords of your own-one's that may not have occurred to you before-based on the foursome shown on each card. And that's part of the wonderful creativeness of the Comparative Tarot method and of this deck.

As is my custom in writing a review, I asked the deck what it thought its major function was. The card I drew was the King of Swords. Sim tells us that the core meaning is one of intellectual astuteness and severity. For me kings know the rules and the King of Swords knows how to enforce intellectual understanding. Comparative amplification from the Marseilles deck is that of lawyer; judge; intellectual man. The Universal speaks of an intellectual decision maker and articulate man (but I have to say, this king is one pretty fierce looking dude, and I don't know if I want him to help me with my decisions. If he alone were my Tarot teacher, I probably would shudder and run).

The Tarot of the Sphinx King of Swords pertains to friendship and community, while the Tarot of Origins card suggests cheerfulness and a happy solution. And who could not arrive at this looking at the hippopotamus with wide-open mouth on this card. Clearly, this deck is telling us that to learn to use it is definitely one that is going to require thought and discipline ("Learn the rules, for heaven's sake," says the frowning Universal king), yet its design is such as to help us develop astuteness with respect to the Tarot cards and to articulate our understandings more expansively. Although a complicated and strenuous task (represented by the elaborate clothing of the Marseilles king), if we approach it with joy in our heart (love that hippopotamus), we will achieve success-as do all kings, of course. Clearly part of the fun for me in using this deck will be to expand on the symbols in each of the four decks shown and connect them beyond the keywords.

The cards measure 4 3/4" x 2 1/2". The design on the backs of the cards is dark blue and shows four cards (one from each deck), duplicated four times, in 16 squares. Half are right side up, half reversed, so that you cannot tell whether or not the face of the card is upright or reversed.

Note This deck is not recommended for beginning readers, but rather for intermediate and advanced readers who want to approach the Tarot from a new perspective.

The four decks have been chosen to illustrate the different strands of Tarot. Ranging from historical to the Waite 'standard' to completely re-created, they are: the Universal Tarot (top left), a Rider-Waite-Smith clone; Tarot of the Sphinx (top right), Egyptian-themed; the Tarot of the Origins (bottom left), a 'primitive' and natural reinterpretation of tarot with very little traditional symbolism; and the 17th century French images Tarot of Marseilles (bottom right). All are inset onto a mid-blue background and have Lo Scarabeo's standard multi-lingual titles. The backs are tiled and reversible images of the Lover cards in blue tones.

Not recommended for beginners, there are no keywords on the faces of the cards, or potted history, basic spreads, or introductory info in the companion booklet written by Valerie Sims. It is assumed you know all that already, that you have passed the phase of divining by keywords and now want to explore the meaning of each card in more depth. The range of tarot images and symbols on each card is extremely varied, as we see four faces of the tarot archetype instead of the customary one. The LWB offers -five- comparative meanings for the cards, a 'core meaning' and keywords associated with the four sub-cards. This is intended to assist the student to see how the individual 'voices' of tarot make up the overall 'tune' of the interpretation.

While the Comparative Tarot is primarily a study tool, this doesn't prevent it from being used for reading. A one-card reading is recommended at first, as a large spread can look impossibly busy (and the web of meaning approaches impenetrability), whereas a single Comparative card can provide a great deal of information.

A valuable tool for deepening tarot knowledge and insight, the Comparative Tarot is most useful for intermediate or advanced tarot students. If you've ever tried a tarot reading using more than one set of tarot cards, you will appreciate the Comparative deck!