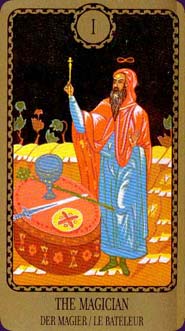 The Egorov Tarot is a self-titled Tarot from Russian artist, Alexander Egorov, and published in Austria. The card imagery is Rider-Waite-styled and they have titles in English, German and French.


Card Images from the Egorov Tarot 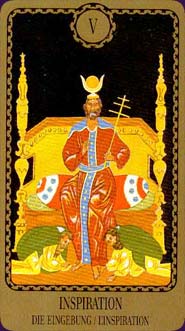 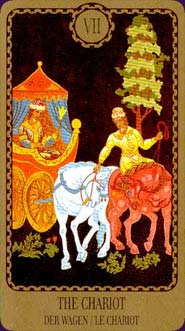 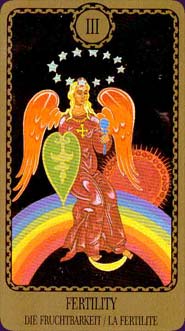 Let me state right off that the LWB provided with the Egorov Tarot is somewhat less than completely helpful. Experienced tarot collectors and readers will not be surprised, but in this case, it is largely because of the quality of the translation. The original text was probably in Russian, given the designer's background, or possibly German, given that publication was by Piatnik in Austria. Egorov took a psychological approach to tarot and perhaps the concepts were difficult to render in English. Careful reading and perhaps re-reading (of some passages) will help. Given the particular approach to tarot interpretation taken here, I will momentarily bewail the lack of a suitable book to accompany the deck.

That done, the Egorov Tarot is a fascinating deck! There are many styles of tarot card illustrations that I find appealing, and one was that used in the "Russian Tarot of St. Petersburg". I own several of the black lacquer boxes from which that tarot derives its art style. Both boxes and cards are lovely. So when I heard about the older Egorov deck, and saw a few card images on-line, the similarity was close enough to make me desire the Egorov deck too. In due time, it arrived, and I was not disappointed. Now that is not to say that these two "Russian" tarot decks are virtually the same. They are not. Compared to the "Russian Tarot of St. Petersburg", the cards of the Egorov are physically larger, somewhat thicker, and have quite a different finish on them (matte with a touch of waxiness). The artwork itself is really only vaguely similar to the RTSP. These are NOT the very fine, tiny paintings from the lacquer box tradition. Each card image is still a little jewel on its own however. The style of the actual human and landscapes images is somewhere between that of the lacquer boxes and Russian Orthodox icons. To my eye and taste, they are quite pleasing.

All the Egorov cards have a gold-coloured border, within which is the card image, Majors and Coins are essentially set against a black background, Wands are against dark red, Cups on dark green, and Swords on a blue-black. Each suit also has a dominant colour theme for the actual images: blue and green within Swords, pink/reds/brown within Wands, greens/light blue within Cups, and orange, tan, and brown within Coins. Each colour scheme contrasts nicely with the dark background of the cards. The Majors have no particular colour scheme, but tend toward bold and deep shades. The card backs are fully reversable, featuring a mirror-image bird cameo design in plain gold on a black field. The overall effect is rather exotic. While I would not suggest this as a first tarot deck for anyone, for a reader with some modest experience, there should be no problem at all. Cards names and designations are given in three languages: English most prominently, as well as German and French. Sadly, no Russian titles are given. Each suit card does however bear the appropriate number of its suit's symbols. There are a few name changes in the Major Arcana: the High Priestess is rendered as "the Science", the Empress is "Fertility", the Emperor is "Man of Knowledge", the Hierophant is "Inspiration", and so on for almost half of them. One of the more interesting is Major XIV rendered as "Sun Genius". It is not clear why these changes were made, but it really doesn't affect the reading of the cards, so there is no point in getting unduly concerned by it. There are a few other changes or additions to images. The lovely Fool card (numbered XXI here) includes both a dog behind the man, and a "crocodile" in front of him. This is certainly "double jeopardy"! Boats are featured on several Sword cards, including 6, 7, and 10. One of my favourites is the dominant place of ripe grain given on the Ace of Coins: strong slavic imagery indeed. But none of these changes or differings from "the norm" of tarot should frighten anyone from using this deck. Two readings of the LWB and some practice should settle any qualms.

Here is the winning aspect of the Egorov Tarot to my mind: perhaps it is just my own slavic ancestry kicking in, but I found this to be an astonishingly "intuitive" deck to use. It "spoke" right after the first shuffle and spread in a way I'd never seen before. I was truly amazed at the clarity. So this has rapidly become one of my favourite decks, and I continue to enjoy exploring it. If you have a taste for something a bit different, and don't mind enlarging upon your interpretational abilities, the Egorov Tarot might be just the thing to offer a gentle challenge in your tarot experience. While hardly new, you may find it refreshing, as I have. It comes as 78 cards in a standard light cardboard box, with a 64-page LWB, and enough space for perhaps a small notebook or log. I think it an excellent value for the price I paid, and cherish it in my collection of over 200 tarot decks. The Egorov is a wonderful tarot deck!