The art of the Polski Tarot is exaggerated, and to my eyes has a surreal dreamlike feel. The main titles are in Polish, but there are also English and French subtitles.

Card Images from the Tarot Polski 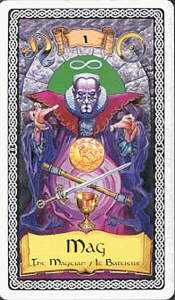 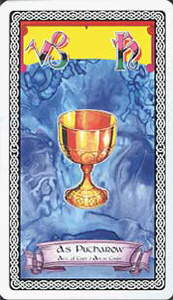 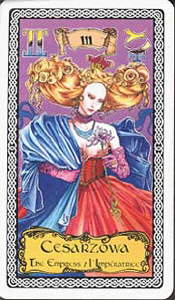 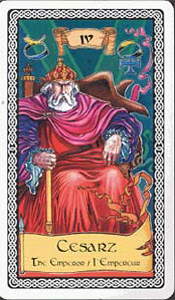 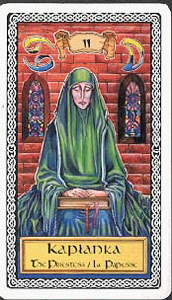 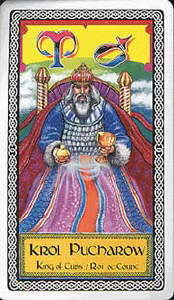 I could not begin to describe this unique and expressive, Polish tarot deck, without first talking about Anna Ligero’s exciting use of colour. What a visual feast! At times the colours seem jewel-like, with deeply saturated blues and greens, and rich reds and purples; other times they seem almost riotous with surprising lime greens, vibrant fuchsias and yellows, and energetic oranges.

Rather than rendering each card in the same style as the other, this skilled artist has fit the mood to the individual card. The cards are balanced between highly energetic, and calm, still drawings which all blend together as a deck. Her well-executed illustrations show a deep understanding of the energy of each card.

While most of the cards are rendered in an illustrative style, The Moon stands out as different from the rest, in that it is done as a photographic collage, featuring three hound dogs. This strangely works for me, as it gives the card a surreal quality, which fits in nicely with the meaning of The Moon card.

The deck, approx. 4-6/8 by 2-6/8 inches, comes with a thick, little white book that is, unfortunately, only in Polish, but anyone familiar with reading non-scenic pips should have no problems reading this 78-card deck. (I would not recommend this deck for a beginner.)

The cards are numbered with Roman Numerals. The Fool is numbered XXII, Justice is VII and Strength is XI. Each card, with the exception of The Fool and The World, also contain an astrological sign and its corresponding planetary symbol. A few of the cards carry two planetary symbols, using both correspondences from before and after the three outer planets were discovered. The astrological symbols do not follow those of the Golden Dawn; the Magician is Leo/Sun, the High Priestess is Cancer/Moon etc.

In the Minor Arcana pips, the backgrounds fit the suits: coins are on brown rock, swords over clouds and blue sky; the blues and greens under the cups appear as wet as the reds and oranges look like burning heat under the wands. The Major Arcana and the Court cards are labeled in Polish, with smaller English and French translations underneath.

I have found this deck to be especially helpful with readings of a highly emotional nature. They have helped me uncover deeply hidden feelings. When reading for others, I have found that they seem to stimulate an empathetic connection with the querant. I highly recommend this unusual deck!