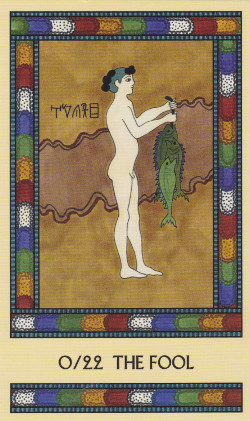 The Minoan Tarot is a beautiful and carefully considered tarot inspired by the artistic style, colouration and symbolism of the ancient Minoan culture. The deck has 86 cards, and includes two extra court cards to gender-balance each suit.


Card Images from the Minoan Tarot 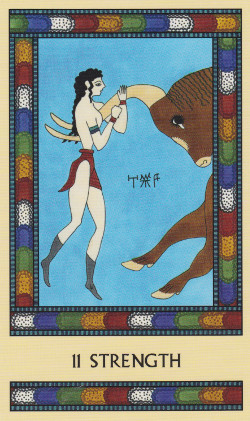 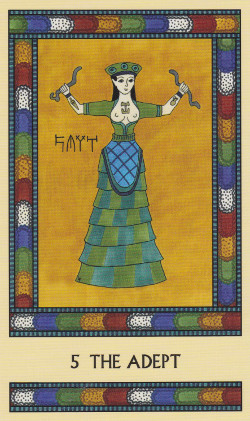 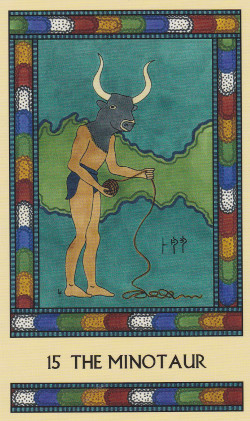 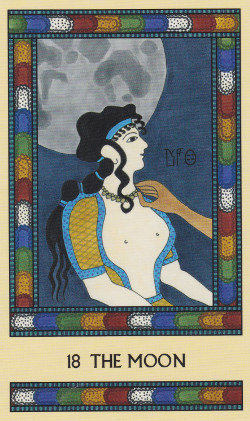 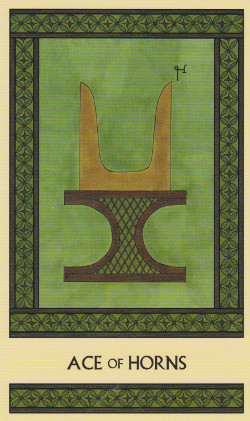 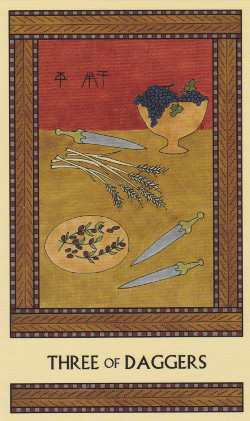 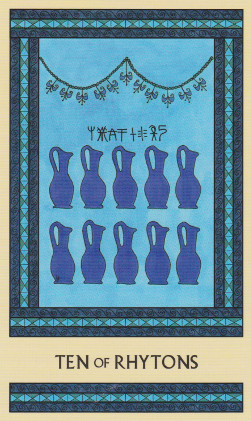 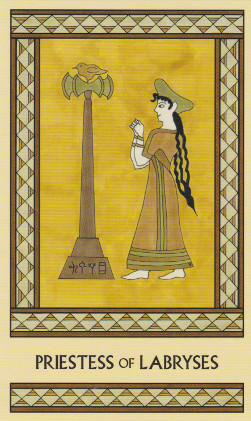 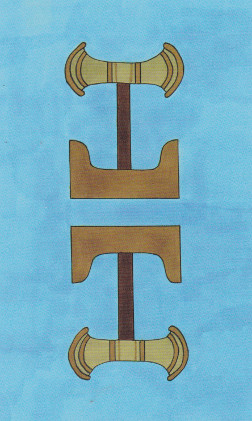 The Minoans were a Mediterranean civilisation that flourished between 3650 and 1400 BC, and centred their culture on the island of Crete. This Bronze Age society proceeded both the Mycenaeans and the ancient Greeks. They were primarily a seafaring nation of traders and artists with a penchant for decoration including frescoes and fabulous jewellery, but also contextually speaking, great architects and builders.

The administration of Minoan society seems to have been centred around elaborate palaces, five of which have been excavated, as well as cities that were sophisticated in their planning and infrastructure. Very little is known about their spoken language; 2 written scripts have been identified, known as Linear A and Linear B. Linear A script has yet to be deciphered, but Linear B was unravelled in the early 1950s.

Inspired by this complex, artistic society, writer and artist Laura Perry has developed the fascinating Minoan Tarot. This deck makes the most of the beautiful and plentiful Minoan art (some cards, notably in the Minor Arcana are the work of the artist’s imagination) although they are modern representations of extant artworks.

This is an 86-card, fully illustrated tarot deck, with 22 Major Arcana and 64 Minor Arcana. The Major Arcana utilises A. E. Waite’s ordering of the cards, however there have been some notable changes to the titles in order to accommodate the Minoan theme. To whit; The Magician is now The High Priest, The Hierophant – The Adept, The Hermit – The Labyrinth, Wheel of Fortune becomes Fate, The Hanged Man renamed Sacrifice, Temperance – Balance, and The Devil is unsurprisingly The Minotaur.

The background colour to each suit of cards is representational of its element; Daggers are set on a terracotta backdrop, Rhytons have a primarily blue backing, Labryses have a golden yellow setting, and Horns feature green surrounds.

Each suit has 10 number cards as well as 6 Court cards – Youth, Maid, Lord, Lady, Priest, and Priestess. The addition of the Priest and Priestess cards allows for an equal balance of genders, and the inclusion of the concept of child/teen, new adult, and mature adult. Laura Perry, the decks creator and illustrator makes it clear that these cards can also represent energies and characteristics rather than being inflexibly tied to gender identity.

The cards measure 76 x 128 mm which makes them a fairly average sized tarot when compared to many decks currently in circulation. The cards sit nicely in the hands and their smooth, high-gloss finish makes them very easy to handle and shuffle. A subtle difference between this deck and many others is the sharp corners (most these days have rounded corners).

The card stock is superb, being light yet sturdy and flexible without being flimsy, this card stock is made to be handled, and withstand frequent usage. The print quality is excellent, being both crisp and clear with sharp lines and edges, and no misprints, blurriness, or colour bleeds.

The artwork is modern interpretations of some of the most famous pieces of Minoan art, however the artist has done her utmost to keep the colours consistent with the original artworks, and to keep the images in context.

In keeping with the limitations of a naturally derived palette the images have a restricted number of colours, imaginatively used. The images are rendered primarily in shades of terracotta, tan, deep blue, sky blue, olive green creamy white, earth brown, and grey. In keeping with Minoan tradition men are depicted as having tan or terracotta coloured skin, and women being cream or white skinned. Each card has a keyword written on it in Linear B script which hints at the quality the card embodies.

The cards have cream coloured borders, with the card’s title and name underlined with a strip of colourful framework, which also surrounds the central illustration. The illustration on the back of the card – mirror images of a labrys on a stand, with a sky blue background – is reversible.

As with all Schiffer Publications’ decks the packaging is superb – the cards come in a solid cardboard box with a fold back lid. There is a ribbon loop for lifting the top open, and ribbon hinges to keep it from falling wide. The cards sit in a cardboard well with the guidebook atop them. The box features artwork and images from the Minoan Tarot, as well as information about the deck. The packaging is solid and sturdy, and while it is scarcely compact, it will survive being stuffed into a backpack or bag without sustaining notable damage.

The 176-page guidebook is written by Laura Perry, who is both the conceptual originator of the Minoan tarot and its artist. The Making of the Minoan Tarot details the genesis of this deck and gives some vital information about interpreting the card’s symbolism. This is followed by a chapter titled Using the Minoan Tarot which gives the Seeker further information about some of the highlights and differences of this deck, as well as elaborating on the meanings of the four suits. Following on from this is a sub-chapter on card layouts; including the weighty 22 card Labyrinth Layout, the Celtic Cross, and the 12 card Yin Yang Layout.

The Major Arcana has its own chapter with each entry giving the source of the image used and a translation of the word in Linear B script accompanying the illustration. This is followed by The Meaning, which describes the action taking place in the illustration, as well as its pertinence to the divinatory meaning of the card. Interpretations are given for both upright and reversed cards, which do not differ much from commonly accepted divinatory meanings. However, reversed cards are generally interpreted as negative or blocked energy associated with the upright meaning.

In the Major Arcana a brief paragraph describing the card’s impact on the Fool’s Journey is given, and in the Minor Arcana each suit has its own appropriate, elemental journey.

This deck has obviously been a labour of love for its conceptualiser - it shows in the attractive artwork, and careful consideration, given to this deck. If Minoan civilisation fascinates you then the Minoan Tarot is a prize worthy of your attention. If you liked the Etruscan Tarot then this deck has a similar vibe to it. If you are interested in tarot decks in which the theme has been meticulously researched and conscientiously applied to the creation of the deck then it will be hard to go past the Minoan Tarot.

While I would not recommend it for beginners (given its non-traditional imagery), this deck is both useful and easily mastered by those who have some experience using the tarot. Overall this is an interesting and highly engaging tarot deck.