The Tarot Nova is a deck of 78 cards with vaguely Renaissance artwork of simplified Rider-Waite imagery centred on a black background. It's a cute gift shop tarot, and the cards are appropriate for children. There are two versions - one with tiny foldout cards, one with more regular sized cards.


Card Images from the Tarot Nova 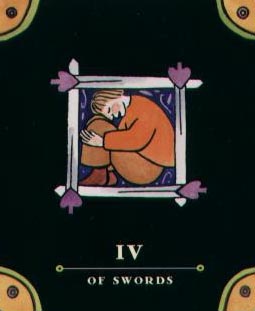 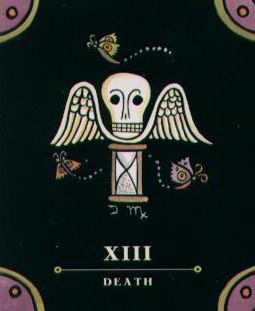 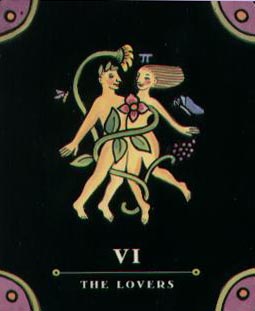 This small, very inexpensive tarot deck looks like a toy but is in fact a "real" tarot deck. I have seen the deck reviewed online as the Tarot Nova in either a tiny edition with cards attached as a perforated sheet, or as a Fortune Telling Kit. The edition I have is called "Tarot the Complete Kit" and comes packaged with a small book and a "spread sheet".

The cards are very small for tarot cards (2 5/8th in by 3 1/16 in or 66mm x 80mm) which makes them easy to handle. The cardstock is thin and flexible and the cards are very shiny and slightly sticky rather like the Glastonbury Tarot. Shuffling will not be easy with these cards.

The major arcana follow Rider Waite traditions for the most part, although Strength is 11 and Justice is 8. Suits are cups, wands, swords and pentacles.

Each card has a black background, coloured corners to show the suit (or major arcana), number and suit (or name), with a single vibrant design in the card centre. Card backs are black with a detailed, colourful design showing two people using cards, crescent moons, sun, flowers and fruit. They are reversible. The whole effect is very immediate and bright, more so than you might guess from scans on the web, where the contrast between the black background and bright colours is not so intense.

The pictures are simple, vivid and direct. Some of the images are reminiscent of Rider Waite, for example, on the five of wands two people fight with sticks, while standing on three horizontal sticks. In some the imagery has been somewhat changed, eg the three of swords shows a heart-shaped turnip with a sword cutting off its leaves. I smiled when I first saw that one. Others are less obvious, such as the two of wands showing two sticks resting on the back of a man whose head is set slightly apart from his body. That one is definitely odd. Cards I like include the crocodile on the five of pentacles and the overfed man looking at a wormy apple on the four of cups.

I would recommend this deck for tarot collectors and for experienced readers who want something small, fun and immediate. I'm not sure it would make a good deck for meditation but it would be an amusing deck to share with friends. Beginners might struggle with the lack of clues in some of the pictures, eg the three of pentacles is simply a ladder entwined with a vine on which grow three pentacles. So it is not a deck you can read straight out of the box unless you have some experience to draw on.

My main feeling about the deck is surprise. Surprise at some of the images, and surprise that what looks like a cheap little deck can be such good value.