The Kitchen Tarot is a modern, warm, very colourful tarot deck and guidebook set. The artwork is vibrant and welcoming, but as it is a 22 card set it is of limited application for readings.

Card Images from the Kitchen Tarot 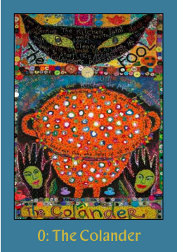 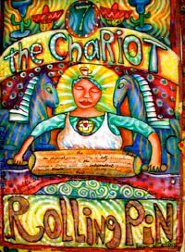 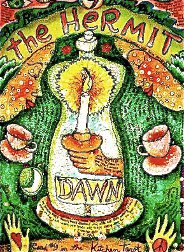 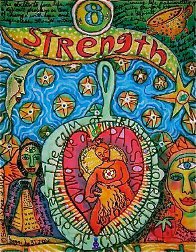 The first time I heard about this deck, was through a good friend who is very related with female life. And it was a great finding for us all.

The Kitchen Tarot is a majors only deck published by Hay House. The artist, Susan Shie plans to finish quilting the minor pips up to 2022.

The guidebook which accompains the deck is very rich and very in touch with the spirit of the deck. The author, Dennis Fairchild, proposes some readings directly related to kitchen and cooking and the ones who are familiar with these universes will find them very helpful. Or at least, different from the traditional readings given on little white books.

The deck itself is larger than traditional decks and follows a RWS tradition in a sense that Justice is 11 and Strenght is 8. However it is important to remark that the artist has changed completely the names of the arcana in order to fill the kitchen, so, instead of The Charriot on 7, we have The Rolling Pin or instead of The Sun, we have Mom and Apple Pie.

In a sense, the deck is real fun to deal and to think about the archetypes out of the book and into our daily lives, since the author has found different correspondences to the arcana which equally work on making the meanings and sittuation work. However, if you are no familiar with the given names, it takes a while to get used to it.

The deck was fashioned in quilts before becoming cards and the art shows many words and in each card a quick reference to the trational cards and other words which helps to relate.

As a major only deck, I am not sure everyone would enjoy as tool for complete readings, though it is an excellent tool for meditation and work.

It helps the reader/student/professional of tarot what is the true taste of our studies and work!