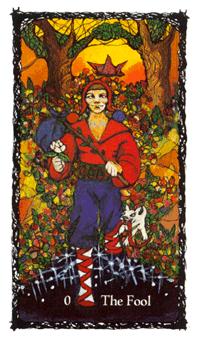 The Sacred Rose Tarot is a beautiful, vibrant Tarot deck that has had some Qabbalistic symbolism added to the colourful artwork, inspired by medieval stained glass and Byzantine icons. Suitable for readers of any level. 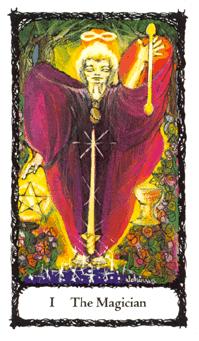 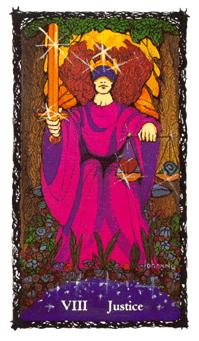 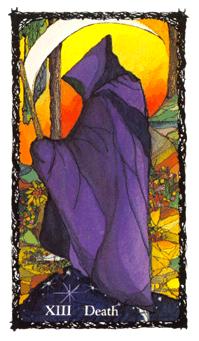 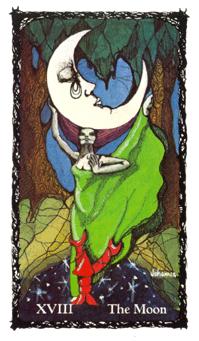 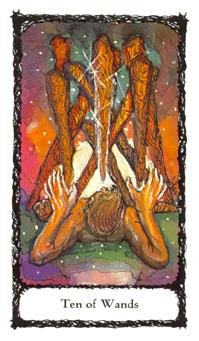 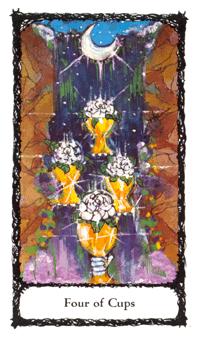 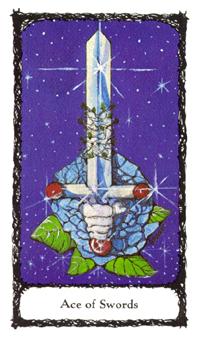 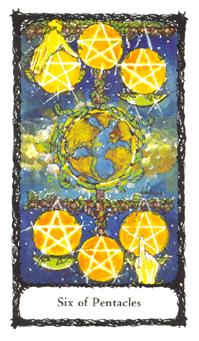 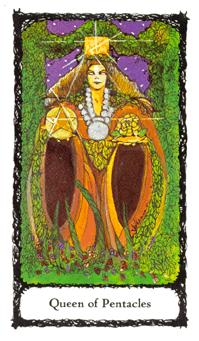 For as many years as I have been on the Internet I have been hearing about this deck. It recently came into my life, and at a very exciting time: 2005 is the 25th anniversary of this deck! What - you added up the dates and they don't make 25 years? The initial release of this deck was a Majors only, gilt edged limited edition in 1980. And it has been going strong ever since!

The first thing that struck me about this deck was the LWB (Little White Book), with a marvelous foreword by Stuart Kaplan of U.S. Games. He tells the story of how this deck came into being, starting with one of Johanna's business cards showing up, unsolicited, at the U.S. Games offices in New York City. He was impressed with the quality of her illustrations, and felt that she would be someone that could relate to Tarot.

The illustrations on the deck were inspired by the artistry seen in medieval stained glass windows, and in Byzantine icons. There is also a link with the pre-Christian belief in the divinity of nature, which shows strongly in this deck. In fact, the symbolism in this deck is meant to be nature-oriented, rather than coming from a bias towards either the occult or the mundane. Having said that, part of the background for this deck does come from the Kabbalah, the Tree of Life, and the cosmos... time and space.

So, what is this "Sacred Rose"? It is a symbol from Western Hermeticism, similar to the lotus mandala of the Middle East. From the foreword, in correspondence from Johanna to Stuart Kaplan:

"The purpose of the "Sacred Rose" artwork is to enable the viewers to envision the obvious fragmentation of their existence, to recognize and foresee their own inner strengths and, despite the ever-present obstacles that arise in life, to transcend earthly existence."

The feminine aspects of the Sacred Rose Tarot cards are spiritual and lunar, while the masculine aspects are physical and solar. Every person should be able to experience the wisdom held within these cards.

The presentation of the cards in the in the LWB is text only - no scans. There is a description and short discussion of the cards, their divinatory meaning, and their reversed meaning. (Interesting note: within the explanation for the Hierophant, in reference to his crown, is a table that associates the seven Planetary Sins with the seven Celestial Bodies and the seven Planetary Virtues.) The Major Arcana is presented as representing the initiation rite from lower self to higher self. The Minor Arcana are seen as representing our desires, needs and hopes as reflected through the suits, with the suit of Pentacles representing the integration of all of the elements. At the end of the book there is a presentation of the Celtic Cross Spread.

The box that the cards come in is done in earth colors - yellows, greens and oranges. The cards themselves are approximately 2 3/4" by 4 3/4", on glossy card stock. The backs have a white border, followed by a dark border. The center of the card shows five roses on a brown "net" type background, with a solid purple background behind that. The center, purple rose is the Cosmic Rose, suggesting time and space. The Red Rose stands for sacrifice, the White Rose represents purity, the Blue Rose represents the impossible, and the Gold Rose represents absolute achievement.

The artwork here is very "otherworldly". Part of the reason for this is t he eyes of the figures in the illustrations - they are, without exception, blank. No pupils, nor irises, simply dead white space. It really isn't scary, but it somehow does make one think of aliens and outer space!

My impression of this deck is that if you were looking for power, you would find it here. Were I to offer my client a choice of decks (which I do), I think this deck would appeal to those who working towards personal empowerment.

There are many cards in this deck that I am drawn to. The Ten of Wands would certainly be one of them. We are used to the traditional image of an upright figure attempting to carry the ten wands. Here we see a figure on his back, hand pushing away the wands that are coming down on him. How many of us have not felt imprisoned by our responsibilities, to the point that we felt we were being attacked by them!

The Ace of Wands attracted my attention for another reason. The traditional hand with the wand in it is not coming from a cloud, but from the center of a red rose. What intense power we see manifested here!

The card of Death can be a difficult card for any deck. In the Sacred Rose Tarot, Johanna has cloaked the figure of death in a deep purple robe - the color of spirit. He still carries a scythe, but you get a bit of a different perception of him. Unlike traditional decks, where Death looks straight out at you, this figure is seen in silhouette, facing the past.

I absolutely love the Eight of Cups! We see a seated figure, with a basket in front of her containing eight cups. Directly behind her we see the full moon, appearing as a mirror. Very "Halloweeny" (the cups are an orange/red), but also containing a tremendous amount of power.

Then we have the Knight of Swords. Facing the reader, very intent and focused on the present, this Knight carries a sword in his left hand, moving forward through the fog with a look of intense concentration and determination on his face. The coloring for this card is dark purple and black.

This last card is a favorite of mine in many decks, and that is the Magician. Here we see a figure, dressed in red, with his arms upraised. Above his head we see a glowing Lemnescate. His body seems to float in space, with the symbols of the four elements surrounding him in glowing gold. An excellent portrayal of the will and absolute power that the Magician represents.

This is a deck that can be used by anyone, and can be used in many ways: in readings, in meditation, and in ritual, to name a few. This is a deck that a reader of any level could relate to and understand. It carries the gift of opening up the mind to accepting the archetypal wisdom that the Tarot personifies. This deck will take you out of who you are and point you into new directions!