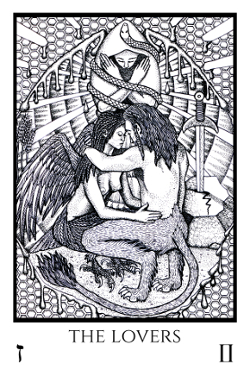 Tabula Mundi Tarot Nox et Lux is the full edition of the Tabula Mundi Tarot, from the artist of the Rosetta Tarot. It has 78 black and white, Thoth-inspired cards based on the Golden Dawn teachings as in Book T. 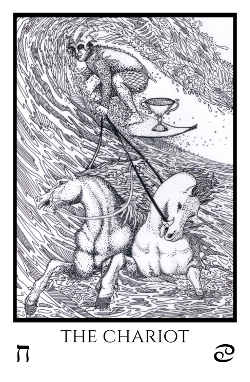 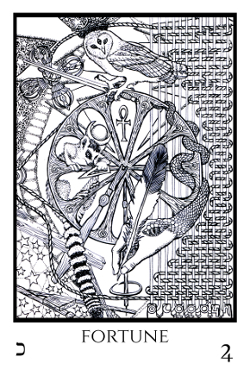 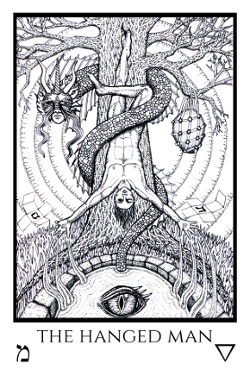 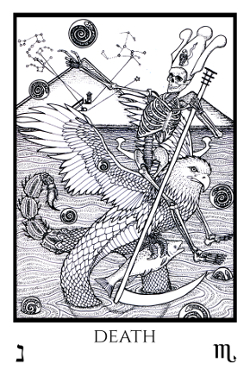 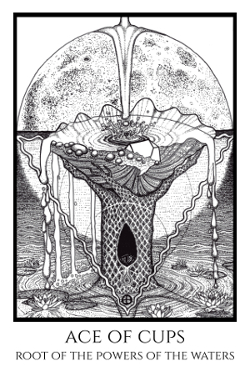 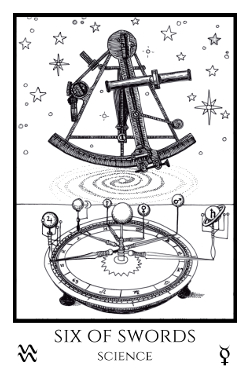 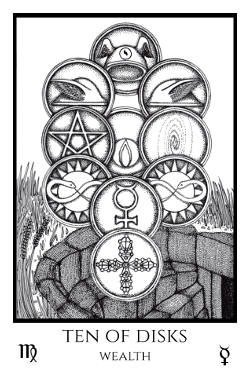 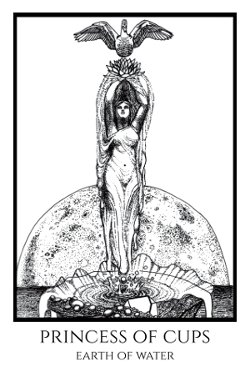 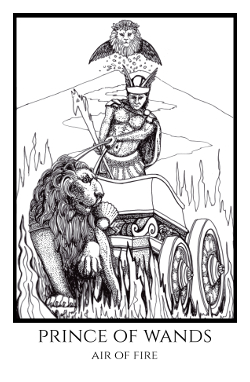 M.M. Melleen's second deck in the Tabula Mundi series, the new Nox et Lux, seemingly picks up where her previous deck left off, this time with the inclusion of a set of fully illustrated pips or Minor Arcana cards. For those who already purchased her previous Majors-only deck the Major Arcana will be familiar as the uncolored versions included in the deluxe editions of that deck.

As before, Meleen's presentation is superb, the cards coming in a handsome black box with the astronomical symbol for Earth emblazoned on it in silver. The whole effect is quite subtle and elegant. This time the cards are a more comfortable size for shuffling as befits a complete deck. The card paper is also stiffer than her previous deck which also improves the experience as this is a deck meant to be used, and seems to bear many shufflings well.

The Majors of this are, of course, the same as in her previous deck and are uncolored. I personally love black and white decks and feel that here the lack of color enhances rather than detracts from one's appreciation of the cards. While the cards are highly influenced by the Thoth Tarot deck by Aleister Crowley many of them betray Meleen's own slant and interpretation and as such some details stand out better when the card lacks color. In fact this may be the only Thelemic deck in black & white and as such is a welcome addition. In any case the Trumps are thoroughly discussed in my review of the Majors-only edition.

This newest addition really stands out, though, in terms of its treatment of the Minor Arcana. In esoteric decks the Trumps and Minors are interconnected through Kabbalistic and astrological associations but these connections often come through in the rather arcane color choices and in any case they are usually not immediately apparent. Here, however, Meleen blends attributes of Trumps in the design of their associated Minors in an exciting and novel fashion, and indeed recommends laying out each Minor surrounded by its associated Major Arcana.

This striking characteristic is without a doubt the defining feature of this deck and its treatment and execution really help bring the cards to life. Thus we see, for example, the Four of Cups is attributed to the decan of Moon in Cancer and is associated with the Priestess and Chariot cards. It depicts the great crest of the wave in the Chariot with four moons connected with the Priestess in place of the Cups.

In another example, the Five of Disks is attributed to the decan of Mercury in Taurus, and is one of the most striking of all the Minors. It shows the Hierophant's pillars emblazoned with bull's heads blocking our path and the turntable and records of the Magus at the bottom, smoking and abandoned. When all three cards are contemplated side by side the effect can be quite striking, and very much illustrate the connectivity inherent in occult decks.

The Court cards in this deck take a more traditional tone yet still blend in with the rest of the deck. As with the Minors, the Courts show the influences that make up the building blocks of each card. Here the level of thought and detail put into the composition truly is dizzying. In esoteric Tarot each Court can be thought of as being attributed to six Majors and Meleen has found ways to incorporate all of them into a each and every one. For an armchair esotericist like me, this is truly a joy. For example, the Prince of Disks is attributed to the Six of Disks (attributed to Luna in Taurus), Four of Wands (Venus in Aries) and the Five of Wands (Saturn in Leo). Thus, in the card one can find symbols pertaining to the Hierophant, Emperor, The Empress and others. This is truly a deck to be pored over at length, there is always more to find.

If I have one criticism about the cards themselves it is that they were released somewhat prematurely. The Minors do not benefit from the lack of color as much as the Majors do. This does not detract from their depth or beauty, though.

In terms of supplemental material Meleen has gone all out. The deck comes with its own small booklet which explains the images succinctly but does not go into the meanings of the cards in depth. That is reserved for the magnificent book Meleen has written for the deck, aptly titled "Book M - Liber Mundi."

The book begins with a few chapters explaining the deck's influences and roots basic structure and "atmosphere" before delving into the cards, which comprise the bulk of it. For every Major Meleen outlines the basic Liber Theta attributions for the deck and a creative verse dealing with the cards. This is delightful and not only helps understand the card but also gives a glimpse into the artist's own view of her creation.

The main bulk of each entry is dedicated to pointing out the different symbols on the card, their significance and contribution the card's greater meaning. In this sense the book is a fantastic treasury of meaning and contemplation. It also delves into the Thelemic/Crowleyan significance of each symbol, thus connecting it firmly to the tradition out of which it sprung. A short divinatory meaning is given at the end of each entry.

The chapter on the Minors is a bit freer in its composition yet is just as insightful and interesting. In addition to the discussion of the composition of the card each entry also includes a short paragraph comparing the card to those in other decks, most notably the ubiquitous Rider-Waite-Smith. This is something that is missing, in my opinion, in many Tarot books. It very clearly shows the connections between the cards and why the images are the way they are.

One of the most entertaining chapters of the book is where the artist eschews all artifice and frankly tells of her creative processes with the cards and how they were made. Thus we learn that the Priestess was inspired by a painting by Bouguereau, that the Lovers was created when the Moon was in Gemini and that the pine comb on the Sun actually exists as a statue in Rome! In my opinion this chapter is no less important than any of the other chapters, done as it is in a chatty and friendly style.

While the book is exhaustive in its depth and scope, some previous knowledge of Qabalah and Thelemic lore would be helpful in understanding it. The deck itself is a wonder, truly; a worthy successor to the Tabula Mundi line. In some ways it feels like the "middle child," which it is, but is well worth getting just the same. A true Thelemic deck, one that, contrary to the Majors-only version, I can recommend to beginners as well as more experienced users. A challenging deck, to be sure, but rewarding and highly important in terms of Thelemic development. A fabulous deck for the New Aeon.