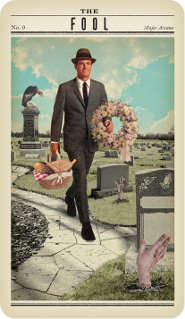 The Zombie Tarot is from the creator of the Housewives Tarot. This 78-card deck is a retro oracle of the undead, where 'wands become limbs, pentacles are biohazard symbols, and the Major Arcana is full of shambling corpses'.


Card Images from the Zombie Tarot 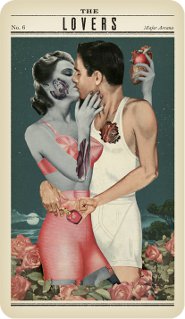 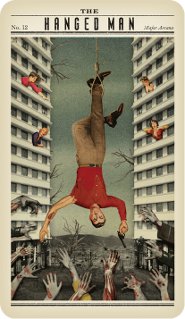 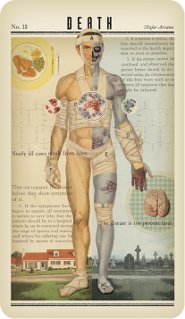 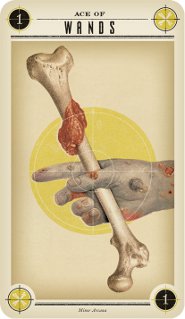 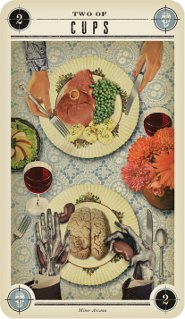 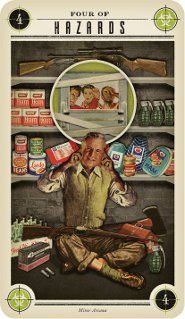 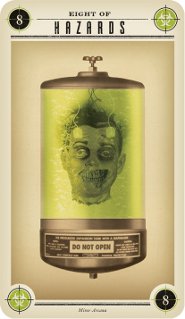 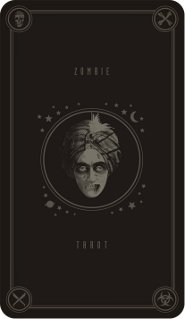 Zombie Tarot – Mystical Prediction Oracle is also known as ‘Your Weapon of Choice’ and ‘An Oracle of the Undead’. This is a novelty card deck published by Quirk Books which capitalises on the current wave of interest in all things 'zombie'.

It consists of 78 cards illustrated by Paul Kepple (author of The Housewives’ Tarot) and Ralph Geroni of Headcase Designs. Also included is a 96 page instruction booklet offering three key words and a brief explanation of the energy by Stacey Graham (author of The Girl’s Ghost Hunting Guide). These are boxed in a deluxe carton, suitable for keeping silver bullets or cremation ashes!

I overcame immense reluctance to work with this deck and having placed my prejudices to one side, I studied the collages which are created from 1930’s, 40’s and 50’s American newspapers. I soon began to enjoy the gruesome elements of this deck as much as a young male goth who has a pathological fascination for horror films and enjoys playing sick pranks.

The card backs are black with the blackened image of a zombie in sultan’s headgear which is adorned with a jewelled brooch and feather. Wands are represented by limbs, pentacles by bio-hazard symbols, cups by skulls and swords by hatchets. Suggested are five spreads, for ‘the Beginner’, ‘The Broken Heart’, ‘The Gravestone’, ‘The Eyeball’ and ‘the Severed Head’. Take the card of 5 of Wands as an example. It depicts a man lying on the floor, covered in blood and shouting because both his legs have been hacked off at the knees. Above him, two men, looking unwell and wearing ripped clothes are on their knees fighting over an amputated leg. Key words provided are ‘Quarrels’ ‘Strife’ ‘Competition’ and the information is as follows: Even zombies will fall prey to an occasional petty squabble. But while you and your buddy argue over who gets to eat the leg meat, it’s possible the rest of the corpse is mounting a swift escape! So remember: next time you find yourself in a quarrel, take a moment to consider what’s really important. Even if you win this battle, you may ultimately lose the war.

This deck is enough to make a ghoul shriek and is described as ‘Insight and Ammunition for Surviving the Undead Uprising’! It’s an ideal deck for ‘Night of the Living Dead’ fans or as a Halloween party gift for someone who lacks regular sensitivities!