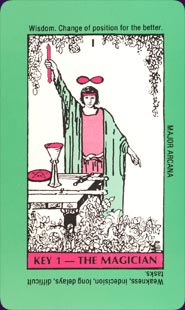 The Zolar Astrological Tarot is a strange double-sided deck of 56 cards that touts itself as 'four decks in one'. The minor arcana (and regular playing card symbols) are on one side, the majors and astrological symbols on the other side. 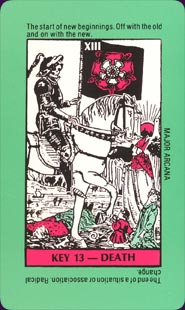 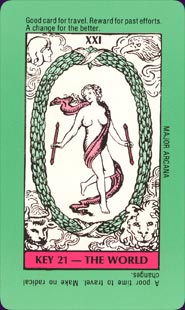 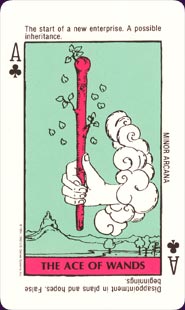 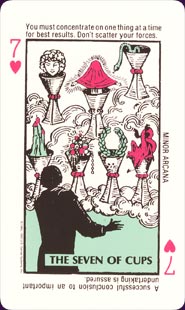 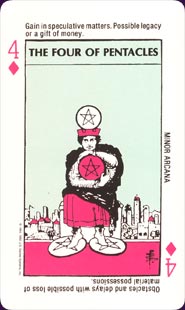 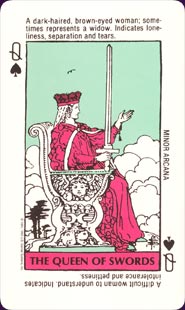 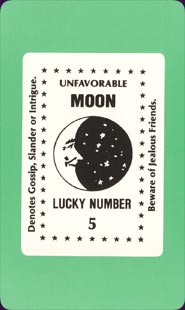 Houston – we have a problem! We could do a reading with Minor Arcana only, or Major Arcana, but not both. Can we see that this does not function well as a Tarot deck? vOkay, on to the LWB (Little White Book). There is a short history of the Tarot (reasonably well written), followed by a short explanation of the structure of the Tarot. The Major Arcana is seen as depicting a series of “ curious figures, each bearing a distinct meaning that typifies human nature, morality, and the life of the world”. The first seven cards are associated with the intellect, the next seven cards morality and our attitude towards others, and the last seven cards aspects of the material or worldly life. (It is to be noted that the Fool (0), follows Judgment (20), and the World (21) stands alone.)

The Minor Arcana suits are associated with playing cards and a symbolic meaning: Wands/Spades/Enterprise, Cups/Hearts/Love, Swords/Spades/Misfortune, and Pentacles/Diamonds/Material and Monetary concerns.

The court cards are broken down into the following associations: King/Man/Spirituality and the Divine World. Queen/Woman/Vitality and the Human World, Knight/Youth/Materiality and the Material World, Page/Childhood/Transition and the Past.

The number associations are: cards 1-3 relate to man, and signify creation and enterprise; cards 4-6 relate to woman, and signify reflection and negation; cards 7-9 represent youth and materialism; card 10 refers to childhood, a transitory or neuter period.

Several speads are presented: a Minor Arcana spread of 30 cards, representing the next 30 days in the Seeker’s life; a Major Arcana spread that covers a seven day period; an eleven card spread called the Ancient Tarot spread (the traditional Celtic Cross spread); a twenty-four card Astrological Card spread; and a spread for use with playing cards, using the Past/Present/Future format. At the end of the book meanings are given for the regular playing cards (i.e. King of Spades – A dark man, ambitious and successful), and a short table of associated meanings (i.e. Prudence – Ace of Clubs, Six of Spades).

The cards are 2 ľ” by 4 ľ”, of good quality, non-glossy card stock. The Minor Arcana side shows a 3/8” white border, followed by a thin black border. The top of the card gives keywords for the upright position, the bottom of the card gives keywords for the reversed position. On the top left hand side and the bottom right hand side are the card number, and the playing card symbol. Underneath the picture for the Ace and Court cards is a ˝” red band, with the card name and suit in black text. Above the picture for the Pips (2-10) the card number and suit appears in black text.

The astrological cards show a ˝” green border. In the middle of the card, against a white background, a border of green asterisks surrounds the name of the Sign, the icon for the Sign, and a lucky number. On the left and right hand sides of the card are the qualities inherent in the Sign. (i.e. Scorpio denotes considerable money, or the receipt of a costly gift, and the lucky number is Nine.)

For the Planetary cards, there is a ˝” green border. In the middle of the card, against a white background, a border of red asterisks surrounds a text denoting favorable or unfavorable, the name of the planet, the planet icon, and lucky number. On the right and left hand sides of the card are the qualities inherent in the Planet. (i.e. Saturn denotes temporary misunderstandings with friends or associates, is unfavorable, and carries the lucky number Five.)

The artwork follows traditional Rider-Waite symbology, using the colors light green, white, black, light red, and a “Malox” pink. If one were to use these cards for entertainment purposes (“fun to use” is written on the front of the box), that might fly. I do not feel that they would work for anything else. Why do I have them? Because they came with a box of other things sent to me by a friend when she was cleaning out her home office!