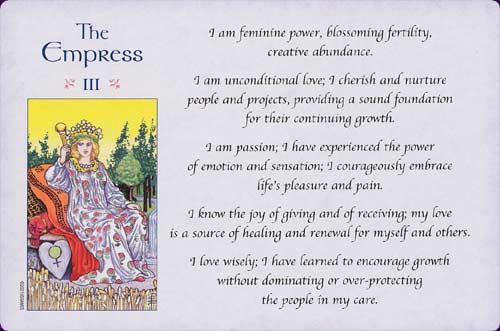 The oversize cards in Tarot Affirmations, this 78 card deck, have small Universal-Waite images, drawn by Mary Hanson-Roberts, inset next to five positive affirmations.


Card Images from the Tarot Affirmations 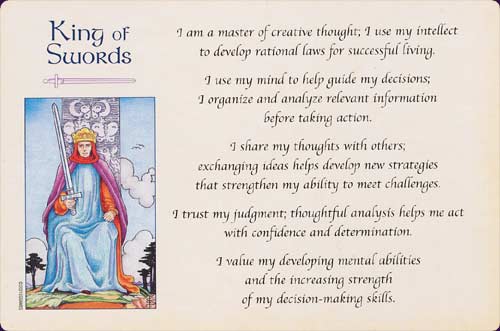 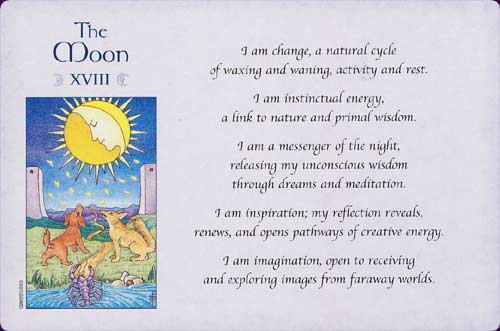 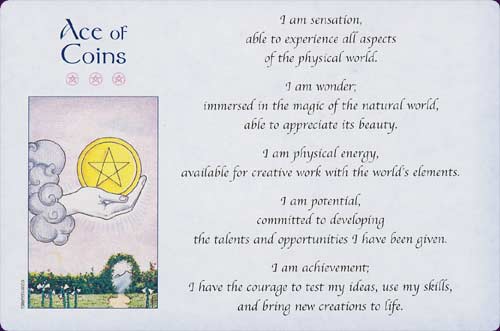 Tarot Affirmations is an attractive set of 78 large-size cards featuring five positive statements - or affirmations - for self-transformation alongside an illustrative image from the Universal Waite Tarot. Dr. Sally Hill, a psychologist and psychotherapist specialising in dreamwork, spirituality and creativity, designed these cards to "help restore balance, resolve conflict, draw on neglected or undeveloped strengths, and find solutions to life's challenges".

Positive affirmations can be an effective tool to help change negative thought processes and habits into more beneficial, productive structures. Which is how these cards began: as affirmations on plain index cards for the author's own use, through a personally challenging time.

The Tarot Affirmations cards are rather more polished than the original version and have been linked with Tarot imagery for a fuller meaning. The cards can be drawn individually for inspiration or guidance, but also can be used as a normal Tarot deck for readings or spreads or a tool to assist with the learning of Tarot.

In the hand, the cards are quite large, measuring nearly 14cm by 9.5 cm. They are printed on very glossy card stock and are landscape oriented to accommodate the printed affirmations. The backgrounds of the card are a range of pastels: bluish purple for the Major Arcana, Beige for swords, pinkish for Wands and aqua for Cups. The Tarot images are inset in the bottom left of the card, below the title and number (or suit symbol) of the card. These are corresponding images from the Universal Waite Tarot, the redrawing of the Rider-Waite Tarot illustrated by Mary Hanson-Roberts. To the right, taking up two thirds of the card, are a set of five relevant affirmations.

The Fool: I am limitless energy, a spirit on the path of life in search of new experience.

The Magician: I am dynamic changing creation; I play freely with my thoughts, feelings, inspirations, and sensations.

Seven of Wands: I am engaged in a struggle for change; I am determined to courageously protect the progress I have already made.

Queen of Coins: I pay attention to my material needs; I fulfil myself by satisfying my creative longings and desires.

There are two extra cards included with the deck - a title card (they make good bookmarks) and a 'Reading the Cards' card with notes on suggested uses. Also packaged inside the sturdy cardboard box with the cards is a thin booklet, which unusually contains no keyword meanings for the cards. Instead, the author's concept and origins of the cards are explained, followed by very basic information on Tarot use in general, and the use of these cards and their affirmations for self-growth and change.

As well as the companion booklet, Sally has provided supplementary information for her cards on her website. Published articles cover dreams, affirmations and how to use them effectively, and Tarot techniques to interpret cards and use them for transformation. It's also possible to draw a card from the Tarot Affirmations deck through the online oracle.

Tarot Affirmations would make a good gift for the Tarot novice, or the total beginner who might be wary of learning all those Tarot card meanings. These cards are simple and easy to use; there is no complex book of meanings; no keywords to memorise. Tarot Affirmations blends the powerful combination of Tarot imagery and positive affirmations into an easy-to-use, attractive set with the potential to improve the user's life, motivation and self-confidence.

Over the years, I have worked with affirmations and the Tarot in many different ways. In researching material for a talk that I was giving on that subject I came across the "Tarot Affirmations" deck. I was impressed with the quality of the work that I saw, and ordered the deck. In the way of the world, obstacles popped up: I had ordered the deck from the author, who, in the midst of a move, did not receive the order. Dr. Hill is a very gracious person, was wonderful to deal with, and I now have the deck in my very own hands.

It is an out-size deck - approximately 3 3/4" by 5 1/2", done on glossy, coated, high quality card stock that will hold up well under handling. The box itself is approximately 7" by 8 3/4", made of sturdy cardboard the cover depicting the Three of Cups, and the back depicting the Four of Wands and the Knight of Cups. Inside a space has been created in the center of the box to hold the cards and the accompanying pamphlet.

There are 80 cards in this deck, with one of the extra cards carrying deck attribution information (with three full moons residing under the title), and the second extra card (with three crescent moons residing under the title) listing four ways in which this deck may be used (with a traditional spread, or as a card-a-day draw; choosing one (or more) affirmations that appeal to you to work with; repeating each affirmation out loud several times, and continuing to repeat it to yourself during the course of the day; making the affirmations your own by writing your own, making sure to write them in a positive form).

The backs of the cards are a pale blue, with the back to back images of a winged Angel, blowing a trumpet, coming from a cloud. In this manner, it is not possible to tell if a card has been drawn in the upright or reversed position. The face of the card is color coded, with pale violet for the Major Arcana, pale lavender for the suit of Wands, pale green for the suit of Cups, pale beige for the suit of Swords, and pale gray for the suit of Coins.

Example affirmations from the Hermit:

"I am introspective, the beginning of a solitary journey to explore unknown parts of self.

I am engaged in a search for meaning and purpose in life and daily activity.

I have the courage to journey along unfamiliar paths to discover my inner voice and vision.

I reorganize my life to free myself from distractions and create space for inward reflection.

I draw upon my enlightened experience to help others with their search for meaning."

The pamphlet, at eleven pages, is rather small. It does not present any keywords for any of the cards, but the personal history of the deck, background information on the Tarot, and what it can offer us, and some insight into the blending of the Tarot with affirmations. Different uses for this deck are given, such as using it on a card-a-day basis, expanding the readings to three cards for a weekly or monthly reading, and doing an expanded Tarot reading on a seasonal basis - such as holidays, birthdays, and the beginning of a new season, or a new year. A sample spread for a three card reading is given, using the definitions of (1) the direction you are currently moving, (2) attitudes and thinking that will support your current direction, and (3) behavior and the environment. The spread presented for the expanded reading is the traditional ten card Celtic Cross spread.

The birthing of "Tarot Affirmations" came about when Dr. Hill was going through a difficult period during her graduate studies in psychology. Feeling a lack of personal energy, and disassociated from the vision that sent her back to school, Dr. Hill began drawing a three-card Tarot spread each morning as a way to anchor her day, using Angeles Arrien's "The Tarot Handbook" to help her interpret them. One of the greatest gifts that she came away with was that there is a positive message to each of the cards. This evolved into writing an affirmation on an index card, and carrying it around with her each day. The cornerstone of Dr. Hill's work with this deck is to promote positive growth and change.

There is no companion book to this deck, but there is a well done site that supports it at Tarot Affirmations). Here you will find articles by Dr. Hill on affirmations, and the most effective way in which to use them; on the Tarot - techniques for interpreting the cards, and using them in a transformational manner; and on dreams. Sample cards are presented, as well as an online oracle.

At first consideration, many people might not see the use in this deck. After all, the whole idea is to come up with your own personal affirmations, right? Dr. Hill does encourage developing your own affirmations, as well as working with the ones already on the cards. The process needs to be tailored to the individual - they need to make it their own. What I see here is a place to begin, to develop ones own understanding of what an affirmation can be. Any one of the 78 cards of the Tarot can act as a Shadow, or a difficult card for any given individual. Using this deck, each of us can have the "Aha!" experience of seeing something positive in cards that we secretly (or not so secretly) pray that we will never draw.

This deck can be used on an individual basis, for basic Tarot reading or for specific work with affirmations, it can be used in a group setting, used in developing a mandala, used in ritual and/or ceremonial work, or simply left out as a reminder throughout the day of whatever you want to focus on. The manner in which this deck is presented also allows it to be used in traditional Tarot settings, as well as with individuals or groups who have no Tarot background, but who want to work on positive growth and change.