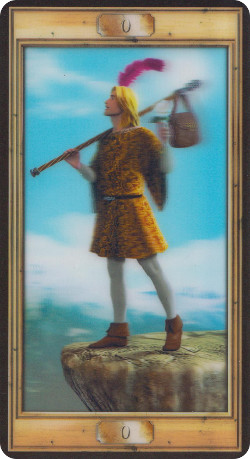 The Tarot 3D is the first of its kind, a tarot deck with a shifting, three-dimensional effect to its cards due to a plastic lens over the card image. The 22 large sized cards take their images from the Pictorial Key Tarot.


Card Images from the Tarot 3D 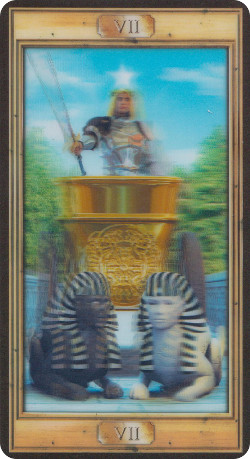 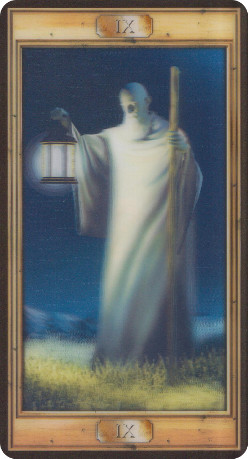 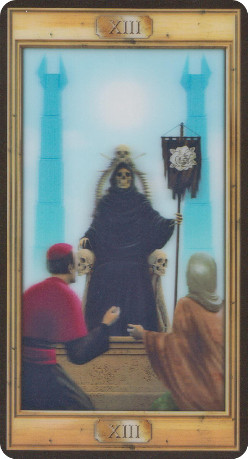 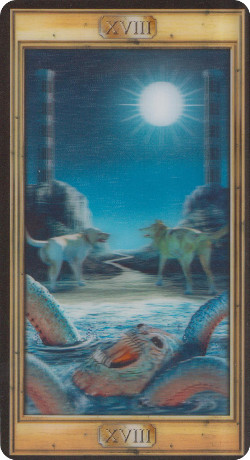 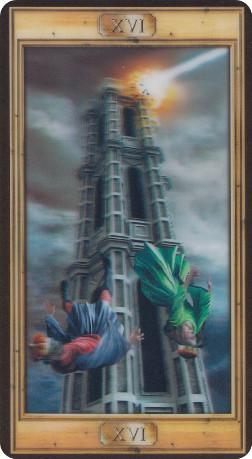 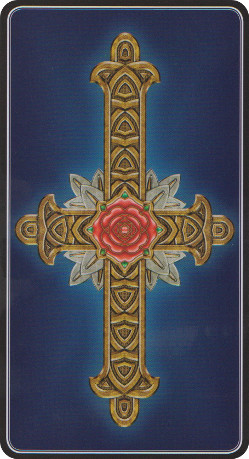 Lo Scarabeo has pioneered some truly innovative and progressive tarots, and their Tarot 3-D takes these decks into a whole new world of possibilities. The concept is simple enough – a Major Arcana, heavily influenced by the Rider Waite Smith standard, made three-dimensional through the auspices of the lenticular printing technique. Put simply, digitally enhanced photos are overlaid with very finally ridged plastic (lenticular lenses) which creates the illusion of depth. Inevitably some cards are more successful than others, with blurring and slightly un-cohesive images on some cards, while others need to be held at particular angles in order to maximise the 3-D effect.

This is a Major Arcana only, with 22 cards, and no changes to names or order from the accepted standard. The cards measure 80 x 145 mm, which makes them quite large. Due to the plastic overlay these cards are also noticeably heavy, which is not a problem for 22 cards – a full deck though would be virtually unmanageable. The card stock is very good. The deck is surprisingly flexible, with the front having a strangely satiny texture, and the back having a glossy finish. The cards are easy to shuffle, while the 3-D laminate produces a soft squeak as the cards move across each other.

The artwork in this deck is a little peculiar – it is perhaps reminiscent of religious pamphlets and some new age illustrations. The same few models have been used for the whole Arcana, which is why The Empress looks like Justice, Strength, Temperance, and The World; and The Magician looks the same as The Hierophant, The Chariot(eer), and The Fool.

There is a starkness, an emptiness, and a lack of warmth to many of these images. This may be due in part to the artists palette – lots of icy blues, cool greens and chilly greys. This is coupled with facial expressions that bespeak a serious commitment to Botox, they are so frozen. On the other hand the serene expressions on the faces of The High Priestess and The Star are stunningly, breathtakingly beautiful.

On the whole this Major Arcana is fairly faithful to Pamela Colman Smith’s images – Death is the notable exception. Rather than the familiar figure of the Reaper on his white stallion, we are presented with a cowled skeleton on a throne of bones, holding a black pennant in one hand, with a priest and a hooded person – supplicants before him.

And then there's The Moon – a truly bizarre card. The wolf and the dog look like escapees from the Taxidermy Failures website, the two towers are more sci-fi than mediaeval, and the moon itself looks like a button. But all that is quite trivial compared to the monstrosity in the pond… The familiar lobster has been replaced with a razor-fanged tentacled creature straight from H. P. Lovecraft's worst nightmare. Why? Why would you do this? It throws the whole Arcana out with its descent into horror movie special effects.

Some of the cards have a tendency towards blurring – The Magician’s sword is rather insubstantial; The Hierophant, The Chariot, Strength, and The Sun all have backgrounds that won't hold form. This is an issue because the images at move and flicker, and it can be quite distracting.

The packaging is an excellent box printed all over in 3-D. This really showcases the cards inside – a copy of The Magician on one side, Justice on the other, all titles and even the barcode have been done in the 3-D process. The box is fairly lightweight, and I suspect that it will not withstand careless handling or heavy handedness.

The 23 page Little White Book has instructions in five languages – English, Italian, Spanish, French, and German. There is a Lo Scarabeo standard potted history of the tarot in 11 steps. There is one layout called the Search for the End – it is a functional 9 card problem solving setup. The cards have no description, simply a number, title, and an upright divinatory meaning. The interpretations are standard – no surprises or novel approaches here.

This Major Arcana is both functional and also a novelty. Many users may find the flickering images disconcerting and distracting, while others will be charmed to see the pseudo- magical effects of the optical illusion. The 3-D effect does have a slightly enchanted-doorway feel, as though one were looking into another world for a brief moment. I am looking forward to seeing what more adventurous and creative tarot artists will do with this medium.

Overall, my personal feeling, is that the novelty value outweighs the functionality of the cards. That being said, it is a perfectly usable Major Arcana, that everyone from beginners to experienced Readers can use.

The Tarot 3D is indeed a ground-breaking tarot deck - it has three-dimensional appearing images thanks to a thick, textured plastic overlay. Depending on the angle at which the card is held, the scene might appear to have depth or to have the characters shift position or expression.

My first impression of the deck is that it was somewhat headache inducing! Viewed straight on, some cards have a blurred, holographic appearance (the High Priestess and the Magician, for example). Viewed from a slight angle, the card image stabilised. Others remained blurry no matter what angle I tried (Strength). The 3D effect works particularly well with a few cards with distinct foreground objects, especially the Hermit, Death (here given a very similar position and attitude to the traditional Hierophant), and the Moon (featuring a rather terrifying fanged octopus-like creature).

It's a 22 card deck, with oversized cards (close to 8cm by 14.5cm), and underlying tarot images sourced from the Pictorial Key Tarot. The cards have Roman numerals at the top and base of the card, inside a wood grain look border, but no text (following Lo Scarabeo's recent trend for no titles instead of multi-lingual titles). The 24-page companion booklet is printed in English, Italian, Spanish, French and German and a has brief chronological history of tarot, a sample nine-card spread and keyword meanings for each card.

While not a deck I'd personally choose for my readings, it is unique deck and one worth browsing through (and perhaps adding to the deck collection).