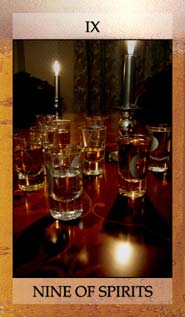 An amusing English tarot deck paying homage to all aspects of drinking. Beginning with The Drunken Fool, the majors of the Alcohol Tarot cover beer, spirits, wine, pubs, raucous ladies, even the dreaded morning after, in true-to-life photographic style.


Card Images from the Alcohol Tarot 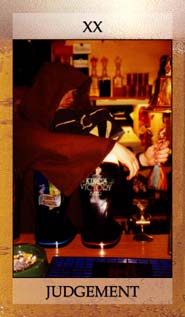 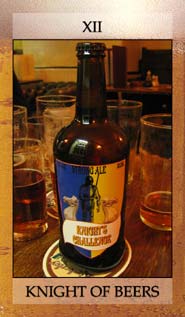 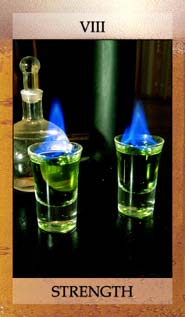 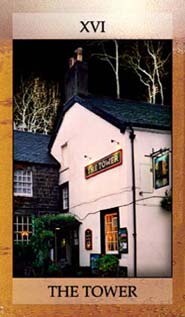 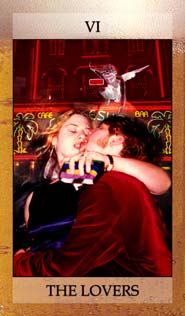 The Alcohol Tarot is a British novelty Tarot devoted to the fun, frivolity and excesses of drinking and (over)consumption of alcohol. According to the authors, the 78-card deck has restored “the ancient link between alcohol and tarot” but can also be used just like any traditional tarot deck.

The card art is photographic and very true-to-life, surrounded by a beery border mimicking the shading of a beer glass viewed from the side. The trumps are traditionally titled and the lesser cards are divided into four suits of Beers (Wands), Lager (Cups), Spirits (Swords) and Wines (Coins).

The trump cards show scenes of rowdy revelry associated with each of the major archetypes. The Fool here is The Drunken Fool, a man with his foot literally inserted in his mouth. The Emperor is in fancy dress, looking red-faced and well in his cups. The High Priestess is a boozy brassy women with blue nails and eyeshadow, and a half full glass of red wine. Strength is two shot glasses, both filled with an evil-looking green liquid and alight with a blue flame. My favourite card is the Star – a distant dartboard, shining out of the night sky, a symbol of hope and inspiration – but there are also two rather disgusting cards showing the seamier side of over-consumption. The Hanged Man spews copiously and messily into the porcelain throne. Death is a urinal that has been used and not yet flushed. (Don’t say I didn’t warn you.)

The suit cards are less alarming, and more sedate. These are pip cards and all cards – including courts - show varying numbers of wine glasses, spirit glasses, beer glasses or lager glasses with varying amount of alcohol within. It’s more atmospheric than it sounds, as the background to the tables is have been tailored to be appropriate for the suit. Wines are set in a comfortable lounge room setting with velvet couches. Spirits are set on a decoratively inlaid and blindingly polished table with thick green curtains: what looks like a men’s club. Lagers are outdoor barbeques, the bottles sitting on a slatted wooden table surrounded by greenery. Beers feature coasters, small wooden tables, and floral curtains reminiscent of small pubs.

In the hand, these cards are standard size - roughly the same as Lo Scarabeo decks - and are easy to shuffle as the stock is thin and flexible and the edges have been well-smoothed. The backs are printed with a silhouetted robed figure holding a beer glass, on a black background.

The cards in the Alcohol Tarot are packaged without a book or little white booklet, but have two extra cards: one explaining the premise and the other promoting the 54-page guide to using the Alcohol Tarot. This guide contains entertaining card descriptions, dignifed and ill-dignifed meanings, and a sample layout, the Alcohol Spread. A sample meaning:

The Drunken Fool: The Fool is so drunk he no longer cares. From here anything is possible, the joy of intoxication, the horror of being paralytic, or the stability of sobriety. The fool represents new beginnings, new possibilities. With his foot in his mouth he represents the unbroken circle and stands as a metaphor for infinite possibilities.

Dignified: A fresh start, new beginnings and new horizons. A card of great potential. The future is uncertain but bright. Why not push the boat out and enjoy yourself? Maybe it is time to attempt an outrageous party trick. Have that extra drink but remember there are important choices to consider.

Ill Dignified: Destructive or dangerous choices. Stupid or selfish actions. You are pissing your life away against the pub wall. Keep your showing off in check, as it is likely to get you in trouble. You might have left your pint glass half-empty but you better hand your car keys in at the bar before setting off home.

The Alcohol Tarot has evidently been well-researched and humourously covers nearly the full range of the drunken experience. It’s not a Tarot for everyone, but would be appealing as a party deck or as a divination deck before a big night out.