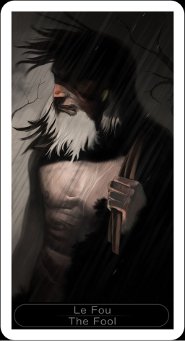 Arcanas of the Star

The Arcanas of the Star is a 22-card art deck with the look of a high-quality comic book. It has modern, somewhat ambiguous images with dramatic and and intense feel. From French painter and artist Phillipe Rouchier.


Card Images from the Arcanas of the Star 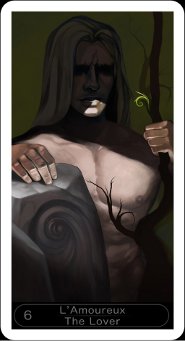 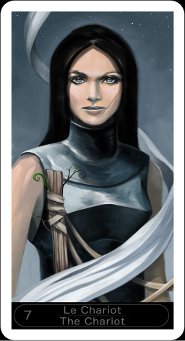 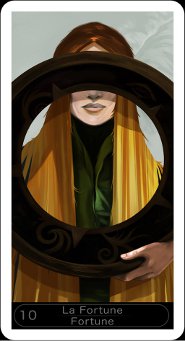 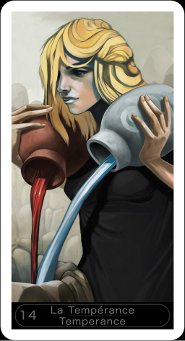 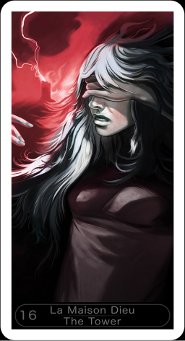 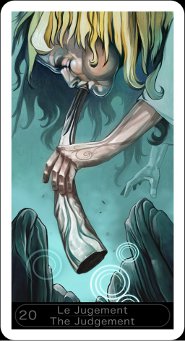 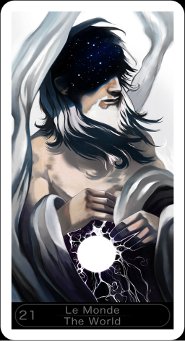 æThe Arcanas of the StarÆ by Philippe Rouchier contains colour artwork designs for each of the 22 major cards of the tarot. The figurative images are ultra modern and highly stylised and many carry an interesting gender and conceptual ambiguity which allow deep expression of the imagination and intuition. The cards have black backs with a yellow central circle within a geometric design of a star shape.

The packet also contains a 42 page explanatory booklet written in both French and English of traditional upright card concepts. The card sequence is non-standard, card 8 is Justice and card 11 is Strength. There is a suggested spread of ten cards and questions are provided to assist the reader. I used this ten card suggested spread for a simplified and personal interpretation.

Philippe Rouchier is an artistic director and designer for cinema and TV and is a published novelist. He specialises in producing elegant images. This is his third major arcana tarot deck, æEye of MyrrdinÆ and æThe Tarot of the StormÆ being previous major arcana decks. Philippe Rouchier says of the tarot ōFor me, the answers to our questions are not somewhere else, but in ourselves. And the tarot is a tool to help us to understand ourselves.ö

My first impression is that this slim-line deck (6cm x 10cm) would be a suitable gift for a young male interested in games of chance and something to provide a talking point. The packet bears a reproduction of the card of The Hermit, a man with a long white beard with backdrop of a starlight night who gazes into the distance. His eyes are in shadow and he holds aloft a lantern lit with a small flame (perhaps a hurricane lamp).

From a well shuffled deck, I drew:

The first card which depicts the central issue, where you are and of fundamental influence in your present situation. The card number is 21, titled æThe WorldÆ. it is depicted as a strong, bare-chested man with long, flowing black hair and a white beard and moustache. His eyes are hidden in shadow. He is holding in his hand a circle of energy. The traditional meaning of æThe WorldÆ card is wholeness, success and completion. My intuition leads me to think this means a new beginning is about to take place and the shades need to be lifted from the eyes of the seeker in order for wisdom to be available for the good use of the energy they hold in their hands.

The second card relates to the source of resistance and what needs to be changed. Number 7 æThe ChariotÆ is chosen and is depicted as a serious young woman with long black hair, her neck is protected by armour. æThe ChariotÆ denotes the seeker will progress and find success, but the wearing of armour suggests her work might dangerous, so levels of safety are a major consideration especially as the staff she is carrying has one dead shoot and one small green shoot which curls into a scroll. At this point, the new project could go either way depending on the level of safety undertaken.

The third card chosen is number 10. æWheel of Fortune is illustrated by the image of a young woman wearing a golden hood and cape covering a green and black dress. She carries a wheel bearing a scroll, perhaps the wheel from the chariot in which she rides. Is the wheel shielding her eyes from us or is she hiding behind her means of success? This card represents the source of the problem, past influences or a matter which is denied. Change is traditionally suggested by this card. You need see your way ahead clearly before embrarking on major projects and evaluate what provides the the most valuable rewards. Philippe Rouchier says of this card: ōI wanted to show that whatever the direction in which the wheel was rotated, the eyes of the character remain hidden. It means that "Fortune" does not show favouritism and can smile at everybody.

The fourth card suggests a past issue, what you want or what might be the answer to past difficulties or the way to remove unnecessary burdens. No 13 is chosen. It is without a title, and for me, represents facing our greatest fears and all that is taboo. It is depicted as a young woman, her eyes shielded by her tousled hair. She holds in her hand a strange, living creature. Philippe Rouchier says of this card: öThe thirteenth card symbolises metamorphosis. It is the "symbolic death" of one state and access into another.

The fifth card is number 6 æThe LoverÆ and is depicted by a serious man with almost his entire face, neck and long blonde hair are bathed in shadow, only his lips are seen. He leans on a large stone bearing a scroll and holds, in his hand, a staff with one dead shoot curling around the chest area and one delicate, bright green shoot. This card represents a situation which will be resolved and the card relates to loves and other close relationships and the trust and openness required. It means the forging of a new relationship or the further development of an existing relationship, which will assist the success of the new venture that has been foretold by earlier cards. You need to be careful of forging bonds but potential for growth is possible if clarity and transparency are achieved.

The sixth card is card number 8, æJusticeÆ and is shown as a woman dressed in black with blonde windswept hair and holding in her hand a sword. Her eyes are downcast. Judgment is a sacred responsibility and one that must be honoured. It is a card that calls for integrity and dignity. This card is related to a matter of justice that is pending and which will be realised as an important part of any future project. You need to take a careful look at issues of justice both personally and in society, using calm and caring justice in business and personal affairs.

The seventh card chosen is card number 16, titled æThe TowerÆ. This relates to current feelings and how you limit yourself. It is depicted as a female with white hair. Either her own hand or the hand of another shields her eyes from the distant scene of a lightening struck tower (which to me looks like St MichaelÆs Tower at the top of Glastonbury Tor). The tower is surrounded with a rich fire-like glow. Upheaval and chaos is the traditional meaning of this card. In order to deal with an impending catastrophe, you will need to remove anything that prevents awareness and empower yourself to take action.

The eighth card is æThe FoolÆ which is unnumbered. This could be the same bare-chested man seen in card number 21, as his face and body also are almost hidden in shadow. Here his long grey beard is tossed by the sleet and he holds two sticks in his hand with which he hopes to rub together and make a warm fire. It is a card of beginnings and endings, of naivety and wisdom, a misfit who thinks outside the box, a maverick. There is a sense of resilience required for your life-path and a decision to go it alone if you really believe in yourself and in your skills and capacities.

The ninth card chosen is number 11 æStrengthÆ and the provided questions relate to desires and fears and a word of warning about the future. The concept is illustrated by a young female with flowing, long red hair, tousled like the flames of a fire. In an area of volcanic mountain peaks, she bears her naked breasts and her hand rests on the head of a bear which is in the process of snarling. One wonders if the energy of the card suggests the woman is safe enough to display her nakedness as she is so well protected by her familiar, or whether her strength lies in her ability to sexually seduce. Either way, caution is required if this card is badly aspected (dealt upside down).

The tenth card is number 20 æThe JudgementÆ a card which traditionally requires you to take a good look at yourself and the good you contribute to your relationships and our world. It is shown as an image of a man with flowing gold hair with a ramÆs horn in his left hand and held to his mouth. The blast signals over the tops of mountains that the last day has arrived and there is no further time to pay debts or perform a favour. As this is the last card in the reading, it implies ethics and responsibility are paramount for the project to reach its best conclusion.