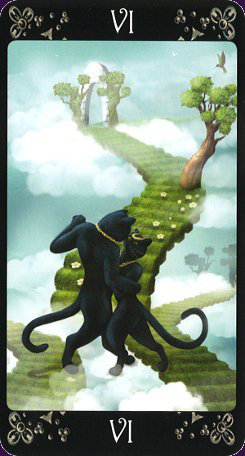 The Black Cats Tarot is inspired by the the magical - and magickal - black cat. The 78 cards mix fantasy and reality, creating a visual story in each card of human-like black cats navigating the world. 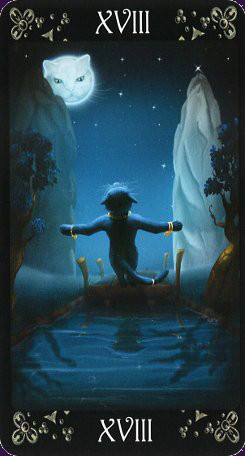 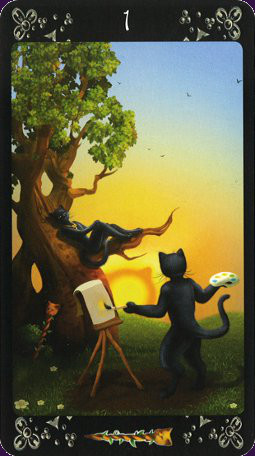 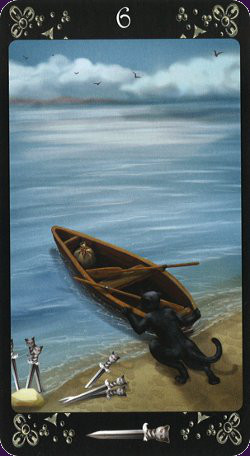 It is extremely easy to become enamored with the Black Cats Tarot (published by Llewellyn). There’s something profoundly magickal about black cats, anyway, that creating a deck in their honor just seems so appropriate. There are a few decks out there already dedicated to cats (Tarot of Pagan Cats, Medieval Cats Tarot, Tarot of White Cats, and Cat’s Eye Tarot are some that come immediately to mind), but a deck of black cats instantly connects with those of us that live a life of magick.

It was the Lovers card of this deck that first took my breath away. It is simply exquisite. It depicts a male and female cat, dancing on grassy steps that lead to a doorway above the clouds, their feet in that unmistakable cross step move of the tango. They look very classy, very sleek, very slinky. The male has his back to us, his broad shoulders positioned in a familiar manner of dance – the left one slightly higher than the right as he gently pulls on the right paw of the female. His right arm snakes around the waist of his feline love, drawing her close to him against his chest... One can believe that he has dark, brooding eyes boring into the green, bright eyes of the beautiful female. She looks up at him, drinking in the sight of him, reluctant to take her eyes away from his. Shy and flattered, she lowers her lids allowing her long, thick lashes to fan across her cheek. Her tail is curled upward, a sign of utter contentment, as she breathes in his powerful, masculine scent. The image transports you to a time long past, of innocent love radiating from giant silver screens, revisiting scenes of Tracy and Hepburn, Olivier and Leigh, and most famously, the unforgettable Bogart and Bergman in Casablanca. With a lazy, swinging motion of his tail, the male cat sweeps the female off her feet, glides her up the staircase, in step and in time with that famous tune, “You must remember this … a kiss is just a kiss … a sigh is just a sigh …” Where other decks may depict perfect love in the Two of Cups, the Lovers card of this deck defines undying adoration, a slow and sensuous awakening of passion, eternal fidelity, and true love.

Martin Luther King, Jr. said, "Everything that we see is a shadow cast by that which we do not see." No truer words can be used to apply to the equally breathtaking (well, all the cards are – really) number 18 card, the Moon. With its dark, mysterious and mystical scene, this image is reminiscent of the lovely Jessica Lange in a drugged state, wrists tied to bamboo poles, awaiting to be sacrificed to the mighty King Kong. But this cat, of course, is not tied to any poles. She is a High Priestess in a solitary ritual, performing that ancient rite of drawing down the moon. Soon she will be going deep into meditation, perhaps connect with the Great Goddess, and feel Her power flow and ebb within her, in sync with the flow of water behind her. The moon itself, drawn in a cat’s image, peeks behind the mountains, looking rather stern as though she resents having to borrow her light from the sun. This is the card of powerful magick, brilliant madness, and emotional illusions. The seeker that gets this card should be prepared to develop their intuition and psychic abilities, to finally accept the gift of clairvoyance.

Another card that depicts water – and one of my very favorite cards – is the Six of Swords. Unlike most Six of Swords in other decks where typically there are three figures depicted (the ferryman and two passengers), what we have here is just one cat. He struggles to get his little boat out on the water, his swords purposely left behind, his back symbolically turned away from whatever is behind him. He and his boat are faced toward a land on the other side of the water, and one gets the feeling that birds are flying towards him to guide him and welcome him to his new home. A seeker that gets this card can probably be told that whatever struggles they are currently facing will be their last for a long, long time. They are moving towards a smoother time in their lives and things in their future will be more exciting and they will experience new hope and new inspirations.

For me, this deck is very, very hard to criticize. Maybe it’s my love for black cats, the Tarot, or my magickal life. Still, the art work is beautiful. The colors are appropriately dark or bright, whatever it calls for in each card. One can feel and immerse oneself in the bristling power of the Emperor of Black Cats; or the rising passion of the Ace of Wands; or the sheer uninhibited joy of the black kittens of the Sun card. Clearly the artist’s intent was to bring us to the magickal, mundane, sly and mysterious world of the black cat. This deck is a must have not only for collectors, but lovers of black cats and who equally love the Tarot.