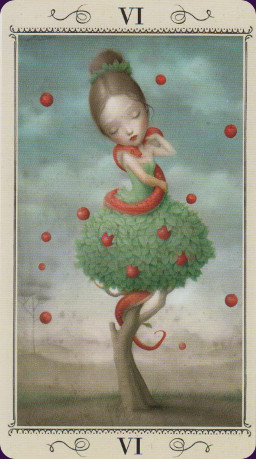 The Nicoletta Ceccoli Tarot has 78 ethereal, dreamlike cards created by the Italian artist of the same name. Her tarot world is haunting, a little melancholy, a place of dollhouses and child-like storybook imagery where only the rules of imagination apply. 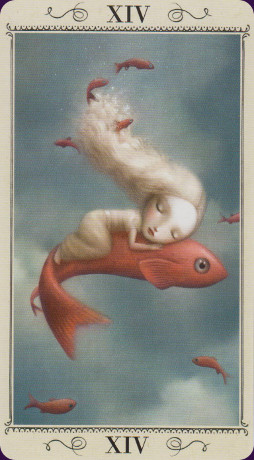 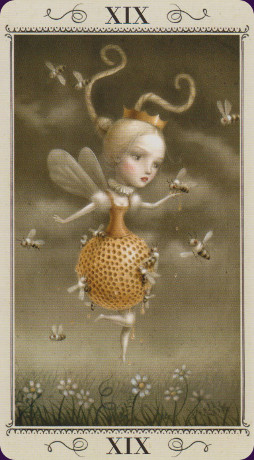 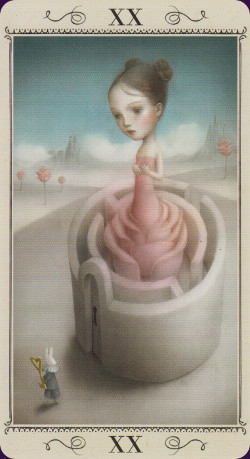 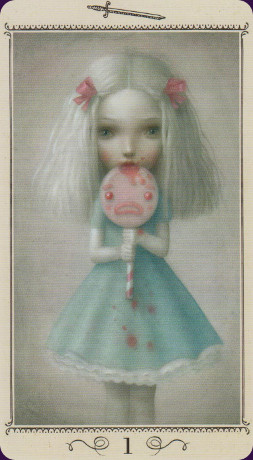 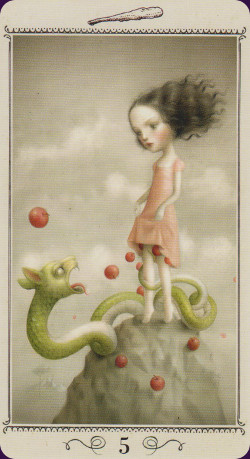 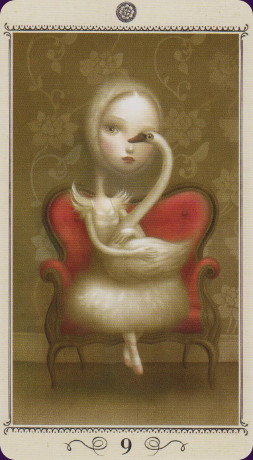 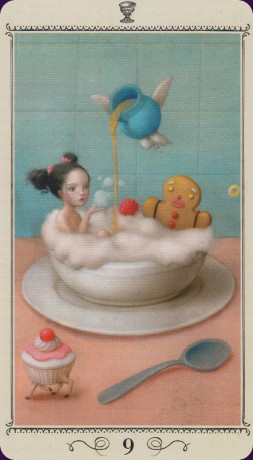 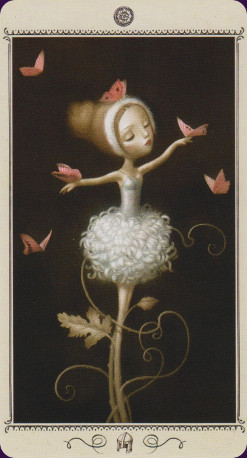 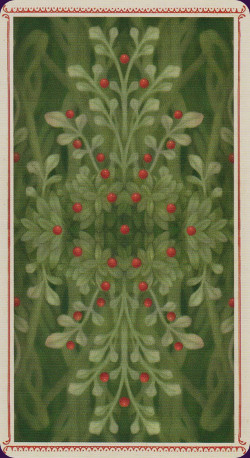 Childhood is a curious country - our lives ,while we are there, are equal parts magic, mystery, and fear - and once you leave its borders you can never return. It is this bittersweet sensibility that infuses artist Nicoletta Ceccoli's Tarot.

This deck utilises pre-existing artworks by Ceccoli, that have been recast sometimes rather forcibly, as tarot cards. Some of the image choices are very clear, especially for the Major Arcana and suit of Swords. Other choices remain fairly obscure until you match the little white book (LWB) description to the picture. It is in relation to the meanings ascribed in the LWB that the potential (and charm) of the cards becomes apparent. Take the 4 of Cups - a snow dome encases a rather indifferent mermaid lounging in a shell - the LWB advises “You have shut out the pleasures of the world…Discontent, isolation, ennui, petty desires.”

The little white booklet is written by Lunaea Weatherstone, and she offers beautiful interpretations and advice founded on fairly standard tarot meanings. It is obvious that the explanations she gives have been written to suit, sometimes even justify the chosen artwork. However there are occasions where this system fails and the image gives no hint or link to the assigned meaning (much of the suit of Discs, the 7 of Wands, the 8 of Cups). This is a real failing. While Ceccoli employs strong imagery and some peculiar archetypes, they are not endemic to tarot systems. To my mind the image should stimulate the psyche and lead us on a path toward interpretation, not leave the reader grasping to find an inner meaning. Tarot cards are doorways to understanding, not doorways to a mystery destination.

Ceccoli’s palette is muted and a little sombre, like a faded picture book. Her paintings are usually focused on young girls in surreal storybook or fairytale settings. Some are touchingly naive and innocent, others are dark and violent - that peculiarly bloodless violence endemic to children's stories. There are recurring themes that are the quintessence of childhood - candy, ice-creams, toys, insects, mermaids, cupcakes, rabbits, Alice (in Wonderland)…often taking on nightmarish qualities and proportions. In the entire deck there are only two cards which human males, boys, are depicted; The Emperor, and the 7 of Swords. There are other nonhuman figures that are masculine such as the Hierophant (monkey), the Devil (an insect), and the 7 of Wands (a bug-eyed imp). The entire court, including Kings, are all depicted by girls.

The cards are a standard size for Lo Scarabeo decks (66 x 120mm), fantastic for people with small hands, like myself. The card stock is good and heavy, smooth and lightly glossy on the face, slightly toothy on the back. The images are clear and vivid, the design on the back is fully reversible. The Major Arcana are identifiable only by Roman numerals, no names. The Minor Arcana are designated by small symbols at the top of the card and a number at the bottom. The suits are cups, wands, discs, and swords. The court cards are identified by a helmet (page), a horse head (knight), and differing crowns for the Queen and King.

Without these denotations there would be no means of identifying which suit the images depict, or what number they rank in the suit – since the pictures contain no traditional tarot symbolism whatsoever. This is perhaps the Ceccoli deck's biggest weakness - without the suit indicators and numbers this would simply be a beautiful collection of Nicoletta Ceccoli's artwork.

I must admit to being quite a fan of Nicoletta Ceccoli’s illustrations so I find this deck utterly irresistible. I love her poisoned-sugar confections of sweet-faced little girls who meet the enchantments and terrors of an often puzzling world with their arsenal of artless curiosity, destructiveness, and ingenuity. Overall this is a beautiful and unique tarot deck, best suited to an experienced reader.

Firmly embedded in the world of subterranean Tarot explorations and archetypes, the Nicoletta Ceccoli Tarot equally delights, surprises, terrifies and exalts our mind and imagination.

This is a deck overflowing with imagination, quirky, odd, with dashes of surrealism reminiscent of a Dali painting. It is rich and dense with childhood dreams, enchantments and terrors alike. As a Tarot deck, it is highly unconventional and at times downright strange, a fusion of oblique fantasy and exploration of childhood themes.

We are invited to step inside a child’s universe and experiences, as seen through the artist’s lens. Sometimes these are delightful in their naivety, joyous and free from society and adulthood’s constraining concepts of what “should be” and “ought to be”; at other times, they are fragile, raw and terrifying. I can’t help but see in some cards, the effects of a dysfunctional family or society, to which a child has been exposed far too early, far too soon. These attributes are not reserved for the Swords suit alone: they surface throughout Minor and Major Arcana alike.

Both the Minor and Major Arcana are accorded the same masterful and detailed art. There are a number of cards where it is challenging to see the relation to the classic or common Tarot theme: the 6 of Discs shows a young girl holding the tails of 5 mice in each hand; in the 7 of Wands, a young girl is punished by a devil-looking creature, tears flowing from her eyes: the disproportionate size between the child and the punisher speaks volumes about the imbalance of power, and it is hard to see the child prevailing against such an insurmountable situation, contrary to the common message contained in the 7 of Wands (young girls, by the way, feature almost exclusively throughout, except for three cards).

In a similar fashion, the card of Strength sees our protagonist mercilessly slaying the beast, thus excluding the key message of exploring and understanding one’s own inner beast of passion, rage, desire, etc that prevails in decks such as Rider Waite Smith. Whether such deviations from classic meanings are a positive or a negative, remains for each reader to ascertain. I certainly enjoyed some of them – such as the Hierophant being portrayed as a monkey, happily preaching to the three children kneeling before him.

The accompanying little white book, written by Lunea Weatherstone, offers good explanations, guidance and describes some of the key concepts for each card. Personally, I see this deck as a great tool for personal exploration, for working on those more difficult questions pertaining to personal healing, or for those times when one desires to really flex their intuitive muscles! Aside from its practical application, the artwork presented in the deck makes it a treasure for Tarot readers, collectors and artists alike.