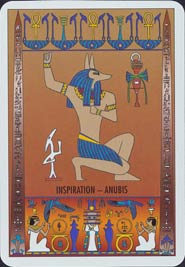 The Egyptian Pyramid Oracle is a set of 25 cards, drawing on Ancient Egyptian mythology for fortune-telling. The deck is divided into five houses of Power, Temptation, Inspiration, Wisdom, and Change with five cards each. 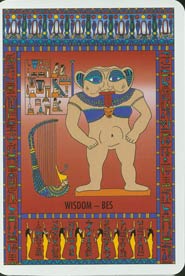 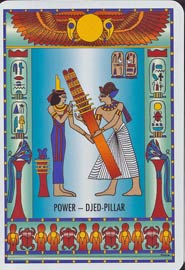 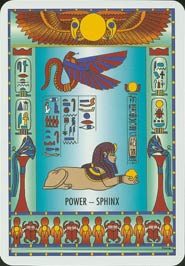 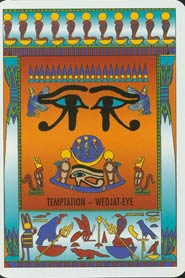 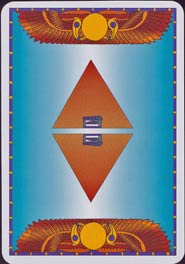 The Egyptian Pyramid Oracle is a twenty-five card oracle, broken down into five Houses of five cards each. The accompanying book (soft cover, approximately 3 3/8" by 5", 172 pages) carries an abundant amount of information, in a very well organized fashion. McColl starts out with a general background on divinity, and then moves on to divinity as it was reflected in the every day lives of ancient Egyptians. We look at the importance that symbolism and imagery play in the Egyptian world, how an everyday object was not only seen as something with an express purpose, but was seen as an image representing a deeper concept. It is these ancient Egyptian imagery that McColl has based her deck on.

The Houses are broken down into five categories, reflecting the five elements (1):

Overview: Indecision. The temptation to take the easy way out. Symbol: the afterlife, a fifth element Element: Spirituality Cards:

McColl also has a small section that offers influences/correspondences between astrology and the Egyptian Pyramid Oracle cards. From the book (2):


At the end of the book McColl has a section on dealing the cards and interpreting them, with good definitions for each position. For example, for card/position number three, she states: "This card indicates the fears the seeker has about the question and outcome. It indicates what is inhibiting or standing in the way, or perhaps personal doubts." This section is followed by a glossary of ancient Egyptian terms.

The deck and accompanying book come in a sleeve-style box, with the cards in a flip-style box that opens the long way, making them easy to get in and out. The cards themselves are approximately 3 1/4" by 4 5/8", on quality, glossy card stock. There are three extra cards with the deck: one card carries definitions for the five Houses; one card carries a graphic of the Pyramid Spread, along with position definitions; and one card carries instructions for reading.

The backs of the cards carry a 1/4" white border, with a thin, darker inner border surrounding two golden triangles (one pointing up, the other pointing down) on a light blue background that fades to white around the triangles. At either end of the card, above the triangles, is an Egyptian graphic. It would be impossible to tell whether a card was drawn upright or reversed until the card was turned over.

The card faces are coded by color and graphic type for each of the five Houses. There is a graphic completely across the top of the card, with another graphic going down both sides. A shorter graphic rests between the two side graphics at the bottom of the page. The illustration sits in the middle, with the House name and the card title in black text along the bottom.

From the House of Inspiration, we have the Obelisk. The central imagery is that of a pink granite obelisk, representing the one found at Karnak Temple in Luxor, supposedly the tallest obelisk in Egypt. It was erected by Queen Hatshepsut to worship the God Amun, whom she claimed to be her father. There is no indication what the two animals seated on either side of the obelisk are, and I am not familiar enough with Egyptian imagery to make a guess! In a reading, this card can indicate success through questionable means, that is about to crumble away. (Note: In the book, each card is presented by House, title, description, explanation of the card illustration, upright and reversed meanings in a reading.)

From the House of Wisdom, we have Isis. Isis appears in profile, wearing the solar crown, encased in two cow horns, that is the symbol of Hathor. She also wears a vulture headdress, with outstretched wings, that act as protection. In a reading, this card represents creativity, organization, and ability. Opportunities that are accepted will be successful.

From the House of Power, we have Ma'at. In the center, at the top of a tall stand is an elaborate fan made of bird feathers. From the stand, we see the two feathers of justice balanced against each other. The hieroglyph of the feather represents Ma'at, the goddess of truth and justice. Ma'at figures sit on either side of the feathers, with their winged arms outstretched. In a reading, Ma'at indicates that stability and justice will prevail.

From the house of Change, we have the Scarab. This hieroglyph fascinates me more and more, every time I see it. The Scarab in this illustration is the funerary scarab of Tutankhamun. The solar disk above the scarab pictures the boy-king being accepted into the afterworld by Thoth and Horus. Wild lapwings sit at the base of the scarab, while on either side we see the combined Djed-Pillar, staff, crook and flail of the pharaoh. In a reading, the Scarab indicates joy and contentment coming from achievement and success.

From the House of Temptation, we have Seth. Here we see the Ibis headed figure of Seth in profile. In front of him is Setekh, his companion animal. Seth wears the crown of Atum, and is shown with Apophis, the serpent and opponent of Re, coming from behind him and rising over him. In a reading, Seth indicates the temptations of the devil: bad influences, loss of spirituality, too much attention being paid to the material world. Narrowness of vision is acting as a block to progress.

One thing that did bother me about this deck was the disclaimer on the back of the box that the Egyptian Pyramid Oracle offers a new system of fortune telling that is easier to learn than the Tarot. To begin with, oracles do not have to be used in the "fortune telling" capacity. This belittles their purpose. Moving on from that, there are similar elements in all systems of divination that have to be learned, amongst which are structure and imagery. The learning can be as hard, or as easy, as the student makes it.

Also, some of the definitions for cards that are actually in different houses are disturbingly similar, such as Djed-Pillar: education, spiritual awakening (House of Power) and Ankh: spiritual awakening and renewed knowledge (House of Inspiration). It can be that they are the same essence experienced in different manners through the elements - only working extensively with the cards would show this. From the small amount of spreads that I did (just over a dozen), the oracle does seem to be on target.

I enjoyed working with these cards, and the Egyptian imagery, and feel that they work well on a stand-alone basis, or in combination with other oracles, such as the Tarot, or the Runes.