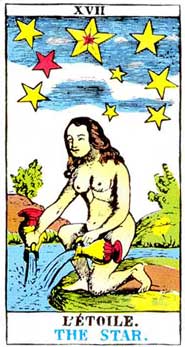 The Tarot d'Epinal is a reproduction of a French deck from 1830, republished in the 1990s by Grimaud. It has 79 cards - the extra is called the 'Consultant' - and some trumps have been renamed.


Card Images from the Epinal Tarot 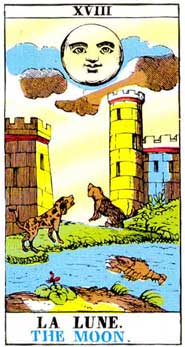 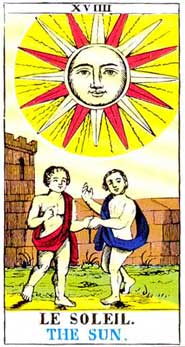 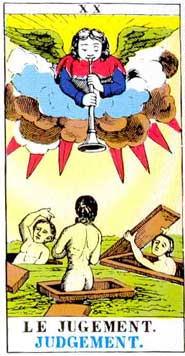 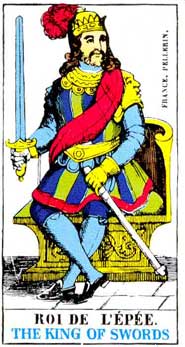 This review is based upon a vintage and bilingual French/English printing of the Tarot d'Epinal from 1976. The deck has 79 cards, the additional card is named 'the Consultant' and is a Significator card. The deck was a reprint of one from 1830 printed by Pellerin (France). The deck was based upon woodcuts designed by the engraver Georgin.

Colors used in this deck are basic and are blue, green, yellow, red, brown, beige, and a deep indigo. The Tarot d'Epinal is designed in a style akin to the 1JJ.

In most ways the Major cards are traditional, but there are some significant differences. For example, the name and image assigned to the numeral II are that of Juno, numeral V depicts Jupiter. The Empress and Emperor cards, are unnumbered. The name titles on some cards are not as expected either, the card we know as The Magician is 'Escamoteur', translated as 'The Conjurer'.

The card which to us is The Tower is named 'La Maison de Dieu', translated as 'The House of God'. The title provides a religious reference that in many modern decks is seldom seen.

The card attributed to the numeral IX, commonly named The Hermit, is in this deck referred to as ‘Le Capucin' and is translated to 'The Monk' - obviously not a literal translation. A more direct interpretation of the title would be 'The Capuchin Monk' or 'The Capuchin'; this too serves up a decidedly religious flavor along with the card message.

Actually, 'The Monk' or 'Capucin' card is a bit of a mystery. He looks to be a friendly and welcoming sort, the kind you'd like to sit for tea and crumpets with. He holds his lantern and gaze up as if welcoming us. And too, he doesn't appear to be a recluse type or someone who glows of wisdom.

Oddly enough, the Death card bears no title. The heads, hand, foot and bone lying on the ground, sans bodies, provide an ideal level of shock value. The skeleton is guilty of the gruesome deed; he is still holding the scythe and is smiling. The main message appears to be - don't avoid change when it arrives at your door.

'Le Fou' (The Fool), which is translated as 'The Madman' is an intriguing card. In ways it's as we'd expect, but the male figure has a look on his face that appears to be angst; the cat hitching a ride on his leg looks as if attacking him. The portrayal of this one image is a little difficult for me to wrap my mind around.

The use of Roman numerals on the Majors is atypical in usage at times; example: IX is VIIII, XIX is XVIIII.

The Minors are Marseilles-like pips. The Courts are also illustrated in a style like that of Marseilles decks. The 'Cavalier de Baton', or 'The Knight of Sticks' has a menacing look on his face; he appears focused and on a mission. The look of anger seems out of place.

The figure on 'The Jack of Coins', or the 'Valet de Denier' looks unfocused and totally relaxed; but he looks as if he should be working and attentive, seeing as he is properly dressed and standing. Again veering away from traditional, but can be worked with effectively just the same.

Other than minor deviations from typical, the images within the Tarot d’Epinal deck appear much as many would expect them to. The differences would likely encourage us to think and perceive outside of the usual frame of reference.

The cardstock is sturdy; the finish appears to be a light laminate and is satiny, and ever so slightly grain-textured.

The card backs are interlocking curved lines in red and blue, reminiscent of the Marseilles style Sword images. The card back background is black with narrow white borders. This design is accented with flowers of red and yellow in the corners, and a flower of red and green, which resembles a cross in the center.

The box is blue on the top and sides and shows a picture of The Sun card both front and back.

The little white book is a remarkable bit of history. Within it the statement is made that Tarot descended from ancient Egypt, and was gleaned from information from the book of Thoth, originally engraved in clay. The LWB author attempts to illustrate that which they perceive to be a direct path of descendancy from stone tablets in ancient Egypt to today's Tarot card decks.

The card definitions within the LWB were provided by Paulette Veiber, who is stated to have been an exceptional Tarot reader in her time. The card meanings offered aren't pat and trite, actually they are quite refreshing. This is not to imply that the definitions offered are unusual in any way, but they are peppered with bits of insight that will be new to some readers. Some of them aren't fully ‘traditional’, but too, this is a Marseilles based deck.

As for my personal opinion on this deck, it's amongst my all time favorites within a fairly large Tarot card collection. Not every image within this deck looks as I would expect it to, that just adds to the mysterious connection I made with it from day one.

I shall always hang on to this one. I love the feel, and it reads well. And too it reeks to high Heaven of history, and of the times when Tarot decks didn't have to avoid mass social scrutiny to the degree they do today.