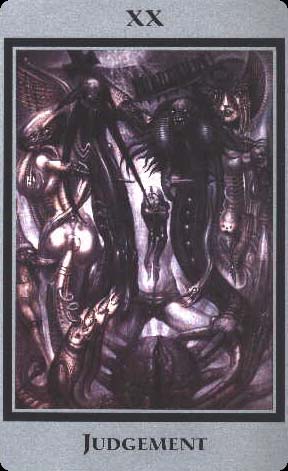 The original Baphomet Tarot, also known as the H.R. Giger Tarot, has been reprinted in book and deck set. Fans of H. R. Giger's dark imaginings (like the aliens of the movie of the same name) will like this deck, but it may be difficult for others. 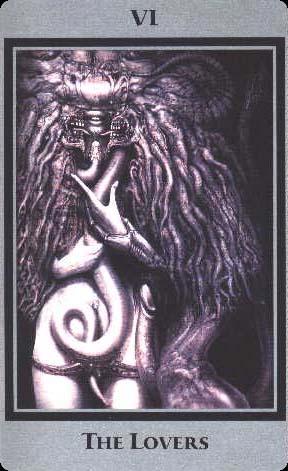 I have been a fan of H.R. Giger since my dad took me to see the movie Alien, in 1979. I also liked his artwork in the now-defunct magazine, Omni, which my parents read. So, being literally a lifelong fan, I always wanted his deck. When I finally got it, I was disappointed that it only contains the Major Arcana. Also, they are older paintings, with tarot names tacked onto the bottom. He didn't paint anything new, despite sketches of tarot card designs inside the accompanying book. The cards are famous paintings that any admirer of his work would recognize. The cards are over-sized and printed on decent card stock. The backs are decorated with a more two-dimensional image, single color over silver. Of course this is still in Giger’s style which he calls “Biomechanical.”

The accompanying book, by the occultist Akron, is so full of insight, mostly of an uncomfortable nature, that it is worth reading alone even if one didn't like the artwork. The book contains nine very powerful tarot spreads, complete with commentary. I also like the idea of different meanings given predicated on the gender of the querent. The sourness I felt by seeing older paintings with tarot names underneath is countered by the first-rate scholarship of the book.

Even more tantalizing, the accompanying book contains sketches of designs for the cards that are better thought out for tarot than what is provided on the actual cards. Giger’s artwork is recognizable for it’s photorealistic style of things that don’t exist. But he often works out compositions in a rather loose, sketchy style. These are done with thick grease pencils. I can see in these rather loose and sloppy works the embryonic stages of powerful tarot cards. Too bad that these weren’t realized for the deck.

This deck is not for everyone. Giger's paintings are often very disturbing, very ugly and shocking. This is the only deck I have that comes with a warning, and Akron and Giger mean it.

“This is not a tarot book in the usual sense. It has not been written for people who seek the truth without questioning themselves, or hide behind the mask of the "positive." Nor is it for those who are addicted to the quest for enlightenment, believing they have long overcome the darkness within themselves and only looking for (and finding it) in others. As the ultimate "Shadow Tarot," the cards and book provide a panoramic view of the psychological and mental underworld. They reveal that the true darkness lies in repressing the shadow- by "striving for the light." The search for enlightenment is actually like an addiction: The drug that enslaves us is shadow itself! So this book is intended for people who first want to discover why they should seek the truth before they try to find this truth.”

So, who is this deck for? This deck can be used as a tool to delve into uncomfortable aspects of one’s psyche. It would probably be inappropriate for questions like, “Will I get that big promotion?” Used sparingly, and with careful preparation, this could be a useful tool in the tarot reader’s toolbox.