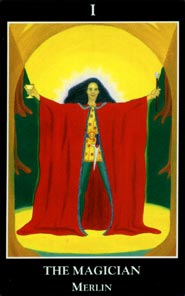 The Glastonbury Tarot is a mix of Arthurian, Pagan and Christian influence, and the myths, history, traditions and residents of the small town/sacred site of Glastonbury, England, form the basis of this brilliantly-coloured tarot deck.


Card Images from the Glastonbury Tarot 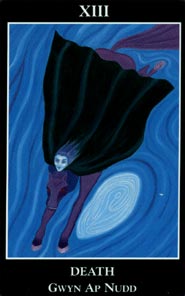 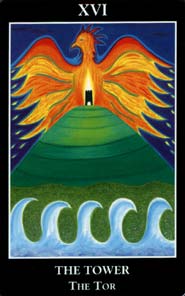 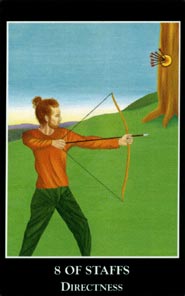 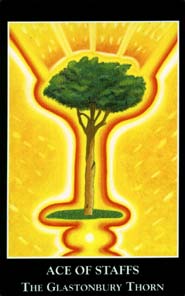 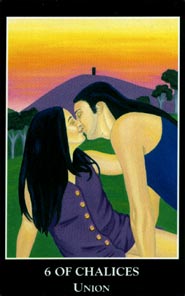 I fell in love with this deck after visiting the small English town of Glastonbury with my boyfriend as a 17th birthday present last year. Glastonbury is a wonderful town full of legend and surrounded by myth and history: so much so that it is often difficult to tell those myths apart from the history! It is certainly an amazing place which manages to house Pagans and Christians alike in an awe-inspiring harmony, and the comfortable, open atmosphere of the town makes Glastonbury seem like a whole world in itself, set apart from the rest of England. This is certainly ironic, considering the fact that in ancient times Glastonbury actually became an island for most of the year, thus giving rise to the Arthurian-Pagan legend of Avalon.

What the Glastonbury Tarot aims to do is encapsulate Glastonbury, its inhabitants, history, traditions, and legends, as well as do the unusual and often difficult task of unifying Christian and Pagan history and myth in one deck. These things I think it has managed to do beautifully! Never have I seen a Tarot deck epitomize its theme so deeply and informatively as this one does, and after spending some time with this deck I always feel drawn back to Glastonbury.

The deck itself remains mainly traditional, choosing to keep the traditional titles and ordering of the Majors whilst also adding the Glastonbury correspondences for each card. These correspondences vary from being actual places or things in Glastonbury, to being history of the town or the myths of King Arthur. For instance, whilst the Strength card shows the long-standing oak trees Gog and Magog which reside close to the base of Glastonbury Tor, the Chariot shows the Barge of Avalon, and Justice portrays the historical Druid chieftain, Arviragus, who allowed Joseph of Arimathea to set up Britain's first Christian community. These correspondences are wonderfully chosen, and really help the reader understand the meanings of the Majors deeply, as well as acting as an 'education' about Glastonbury itself.

The suits of the Minors are slightly changed so that Cups become Chalices and Pentacles become Vesicas. The idea of Chalices is taken from the Arthurian-Christian tradition of the Holy Grail, and Glastonbury claims to hold the final resting place of this Grail, and the Spring that sprung from that place can be visited very easily. The convention of Vesicas comes from this Grail resting place, where the Chalice Well (the aforementioned Spring) is protected when not 'in use' by a wooden cover, on which is wrought in iron a double Vesica. There is plenty of history to the vesica, linked to the Holy Grail and Pagan geometry, and as such there is too much of it to explain fully here!

The Minors have keywords on them, and their meanings are mostly traditional, with the exception of a few cards. The imagery on the Minors however ranges from mostly traditional to totally changed, but these changes are well-interpreted and very easy to read. The Court cards are very well done, with the characters within them being very expressive and easy to understand. The Pages in this deck have been changed to Maids, but their meanings remain the same, and this new title gives the deck a very Arthurian feel to it.

The artwork for this deck is very bold and colourful, being done in oils. Most of the characters show actual inhabitants of Glastonbury, which really gives this deck a warm, homely feel, especially for those who have visited Glastonbury itself. Because of the real people shown in the cards, this deck shows people of all ages, gender, and shape. Not all are stunningly beautiful, which is refreshing to find in a Tarot deck based on history, mystery, and leegnd, and it is a convention which makes the images in the cards very realistic, despite the bold colouring. It is not uncommon to find that the places in the cards are real as well, and the accompanying book tells you where the cards were painted, if not on private property.

The book, with a forword by two of my favourite writers, Caitlin and John Matthews, is just as informative and interesting as the deck itself. It does well to explain the stories and myths behind the Majors, and comments of the symbols and images in the Minors which is always a great help when reading the cards. The book also includes some very useful spreads, as well as the Bird Spread which I think is an absolute treasure of a spread, and certainly one that should at least be looked at.

The backs of the cards are not reversible, but are a piece of artwork within themselves: A gorgeous scene of a sunrise over Glastonbury Tor adorns the backs of this deck. Having fallen madly and deeply in love with the Tor on my visit to Glastonbury, these backs really clinched my love for this deck. The Tor spitomizes what Glastonbury is for many people, but it does not tell all the tales held within this small town: That is for the other side of the cards to do!

This deck could very easily be used by anybody, and it is definitely a deck for those interested in the Arthurian legends, or in the town itself. It is amazing that such a small town could contain within it all the cards of the Tarot deck, but it does, and the results are, to say the least, aswe-inspiring, evocative, and stunningly beautiful, aswell as being usable.

With the fear of this becoming a rave-review, I respectfully conclude that this deck is for everybody, and every collector should own a copy of it, as it is definitely a wonderful addition to any collection. It isn't often one comes across a deck that can be used by anybody (even children), is beautiful, and can teach you nearly all there is to know about the myths, history, and traditions surrounding a subject. Marvellous.