Glow in the Dark Tarot 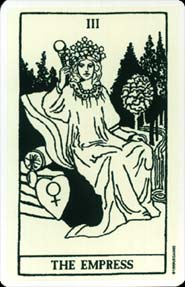 The black and white images are standard Rider-Waite... but with one very special feature. The Glow in the Dark Tarot cards glow that unearthly pale green for a few minutes after being exposed to bright light.


Card Images from the Glow in the Dark Tarot 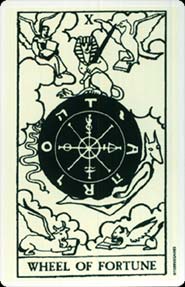 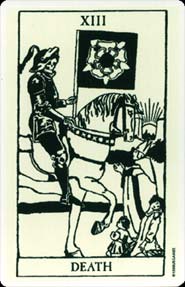 Glow in the Dark Tarot Review by Mary Terhune

This is such a wonderful little deck! I have had it for a number of years, and have used it extensively.

This deck has the special feature of, as the title states, glowing in the dark. I have found it particularly useful for doing “otherworldly” types of readings, and spiritual ones - ones that require quite a bit of deep meditation.

It is an all-majors deck, but as it is seemingly deeply portentous when used correctly, I don’t really see this as a disadvantage (not with this particular deck, though ordinarily I don’t much like majors-only decks). If you “light up” the deck by leaving it under direct light for a good while, you can get them to glow long enough to do a reading with them. (I find a flashlight helpful!)

I have used this deck in contacting the departed, and seeing into Otherworld; it can give very deep insights. It seems to convey a sense of being windows into that other world, and is truly fascinating. It is, of course, black and white in design - the standard Rider-Waite-Smith designs - which render it very clear and easy to read. I find that I myself rather like black and whites, though that is an individual thing.

One thing that I have procured from this deck and that I find especially useful is the spread that comes with the deck, entitled “The Star Spread”. It is extremely simple and works for all kinds of questions, as well as generals. The shape is that of a 5-pointed star, and the positions are: Feelings, Influences, (Emotional) Blocks, and Outcome.

I definitely recommend this deck, particularly to those who are of a spiritual bent and/or lovers of the unusual.


Complete Details of Glow in the Dark Tarot


Similar Decks to Glow in the Dark Tarot