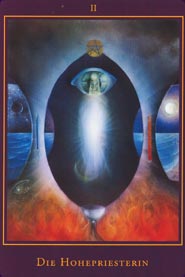 These cards are from the 2002 edition of the German-published Margarete Petersen Tarot, which has now also been released in an English edition. The 78 cards have a dark border surrounding the magical and hauntingly beautiful art. 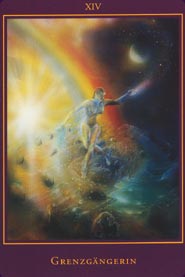 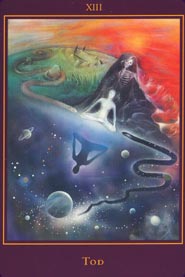 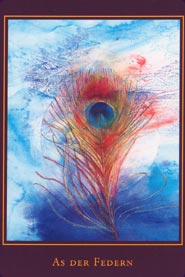 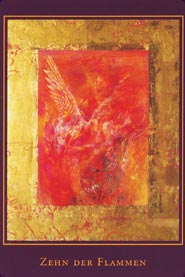 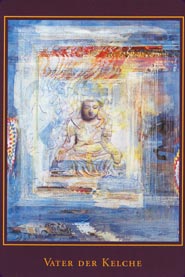 Review of the English edition published in 2004

Margarete Petersen is a Berlin based painter who has also spent time in Bavaria and Switzerland. She began painting Tarot cards (and Tarot based images) in 1979. Her artwork in this deck is extremely abstract ... often not following traditional imagery/symbolism. The trick to reading with these cards is that you need to back away ... to create a space between the cards and yourself ... and allow the images to come to you. The longer you look at the cards, the more images you will see.

The 78 card deck and accompanying LWB (Little White Book) come as a set in a sturdy box with a lift-off top. The box is a light, light gray, with elegant gold print. The central part of the card The Fool in printed on the top of the box, in a circular, vignette format, with a silver border on the right hand side, and a gold border on the left hand side.

The LWB (3 3/4" by 5 3/8") is 78 pages, and bound. In her foreword, Luisa Francia describes the drafts of early versions of Petersen's cards that came into her possession, and how they differed from the final cards. As those who follow the process of any deck may well realize, sometimes our personal preferences are not the ones that make the final cut! She also makes a very important point in that Peterson is quite good at working with subtle energies, and being able to describe the interplay between energy and matter. With Petersen, and Petersen's sister, Elizabeth, Francia undertook her first Tarot experiments and trance journeys. There is also quite an interesting story here about the making of a mask based on a Tarot card ... bringing to mind for me the Fool from Ciro Marchetti's "Tarot of Dreams". Her thought re the "Margaret Petersen Tarot" is that Petersen moves beyond the simplistic solutions to those with greater depth.

In her introduction, Petersen speaks of being very much "at home" in the worlds of myth and fairy tales. Her initial encounter with the Tarot in 1979 reopened a world that had been discouraged in her childhood. She was touched by the symbolic language encoded in the cards of the Tarot. Beginning with the imagery of the Waite-Smith Tarot, she began to look for other images, and other levels of meaning.

The cards are presented without scans, and without keywords/meanings. The meat of the card is presented through a poetic interpretation for the Major Arcana, which is seen as connecting us with story and myth. The Court Cards are presented as speaking for themselves, and of their relationship to other family members, and as representing the "social web" of life. The Pips (numbered cards) are representative of our actions/reactions in the physical world. Each element is described in terms of how is appears on the Physical Level, the Mental-Psychic Level, and the Relationship level. Also given are the boundaries that each number represents. At the end of the book is a short ... two page ... section on reading the Tarot. No spreads are presented.

The cards themselves are 3 3/4" by 5 1/2", which do present a problem for those with smaller hands. They are of good quality, card stock with a matte finish. The backs have an orange based swirling pattern, such that they could not be differentiated in the upright or reversed positions. The faces of the cards have a light gray border, with the card Title across the bottom and the card number, in Roman Numerals, across the top (for the Majors), Title and Suit (for the Court Cards) or Number (in text) and Suit (for the Pips) in dark gray across the bottom of the card.

Some of the Major Arcana have been retitled: The Magician/Magic, The Charioteer/Chariotess, The Hermit/The Crone, The Hanged Man/Trial, Temperance/Mediatrix, and Judgment/Renewal. The Court Cards are Mother, Father, Daughter, and Son. The suits are Flames, Cups, Feathers, and Coins.

While this is definitely an art deck, with its modernistic, futuristic quality, but it is also a deck that opens the reader to the world of spirit. The deck took twenty-two years to complete, and was her whole world during that time.

Some of the cards from the Major Arcana, such as the Fool, The High Priestess, Strength, Trial, the Tower, the Moon, and the World carry fairly traditional imagery, even though they are presented in a modernistic style. Some, such as Magic (the Magician, which is presented as a mask), the Empress (the Emperor, the Hierophant, the Lovers, the Mediatrix (Temperance, which is presented as walking between the worlds of alchemical transformation), the Devil, the Star, and Renewal (Judgment) are quite abstract.

This is definitely not a beginners deck. it is a deck where symbols appear where they have never appeared before, and the cards have to be read "in the moment". Look for figures and angles to appear the longer that you look at the card. This is a great deck to read with, but not one that I would use for readings for others unless they chose the deck themselves for the reading. It is a wonderful addition for a collector, or for someone who appreciates art decks. It is also very high on my scale of life for use in meditation and journeying.