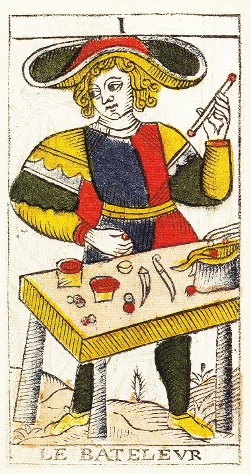 Tarot de Marseille Pierre Madenie 1709 is a facsimile of one of the oldest Tarot de Marseille decks known, printed in Dijon, France in 1709. Beautifully reproduced in a limited edition of 3000 copies by Yves Reynaud, it has kept the colours, details, and scale of the original. 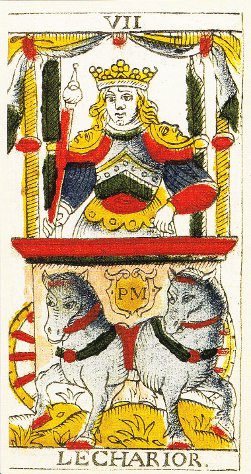 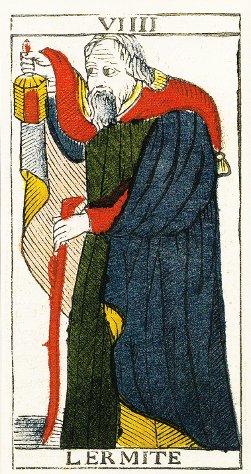 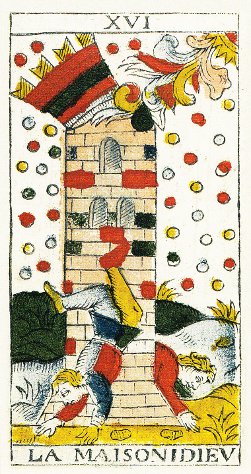 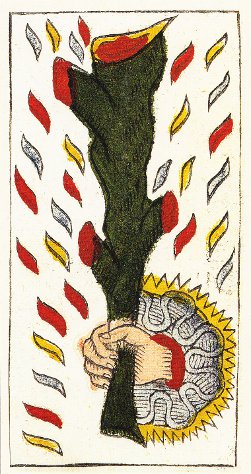 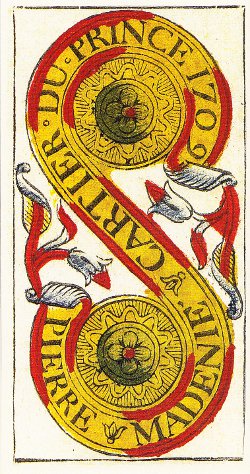 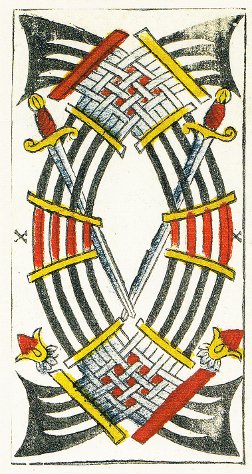 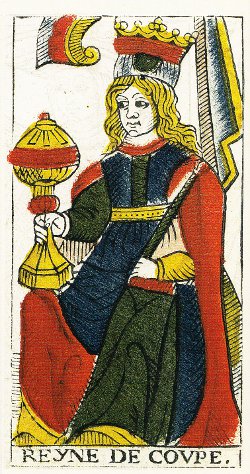 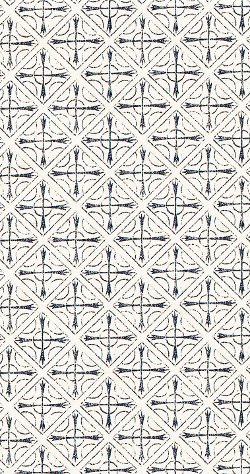 I was poised to write up the next installment of my favourite decks when a new treasure landed on my doorstep like a meteor this week and I find that I cannot think of anything else except this beauty. It is number 232 of a 3,000 limited edition print run by Yves Reynaud and Wilfried Houdouin of an unknown Tarot de Marseilles, the earliest of the so-called Tarot de Marseilles, type II. There is one copy, (from which this deck was reproduced) complete with original wrapper, in the Schweizerisches Landesmuseum, Zurich (see Kaplan, Encyclopedia of Tarot, Volume II, p 314-315) and there is another similar copy – which may or may not be the exact same deck – lacking the Trumps, and housed in The British Museum. This is a facsimilie reproduction and apparently one of a series of historic decks which researcher Yves Reynaud and graphic designer/technician Wilfried Houdouin (who corrected and adapted the images) plan on issuing over the next few years. They have recently launched their elegant and informative website where a number of the proposed decks can now be seen. I knew absolutely nothing about this deck but when I opened it up I had the sense that this must be the most (not “one of”) beautiful and beautifully produced historic deck reproduction that I have ever seen. The sturdy two part box depicting vibrantly-coloured Bateleur (a taste of the riches to come) are soon upstaged once you lift off the lid and – like a trumpet fanfare – the baroque angels on the delicately reproduced paper wrapper announce the arrival of something very special indeed; “Fine Tarot Cards, made by Pierre Madenié, working near the cemetery of Notre Dame at Dijon, cardmaker for the Lord Duke, Governor of the Province of Burgundy.” Think of this as the overture to something fabulous.

It was one of those memorable tarot days I shall remember forever, when the arrival of a beautiful and rare deck spread its magic throughout the rest of the day. All afternoon at work I caught myself thinking of the sumptuousness that awaited me, eager to rush home, package clutched to chest, and wallow in tarot history undisturbed, maybe spread out some of my other favourite Tarot de Marseilles decks across the bed and throw myself at the High Altar of Historic Deck Comparison (one of my favourite pastime). This is one of those decks where, as one of the earliest decks of its type (approximately half a century before the Conver Marseilles) and replete with curious details, you continually pounce on things to decipher and wonder whether these details are in fact tantalising references to even earlier themes and motifs that might, just might, provide a missing link with even earlier decks (the Jacques Vieville Tarot – with its exotic flounces – has this same kind of magic for me, and there is something about the engraver’s line in this deck that reminds me of the Jacques Vieville Tarot).

For example, one of the things that first jumped out at me was the headpiece of the “Cavalier de Denier”. I have never seen one like this before. Is it made of fabric? Why the cross on the front? It immediately made me think of the Templar Knights, and also links the symbol to the gloves of le Pape. Also, I notice that one of the bells from le Mat’s cape has detached itself and rolled onto the ground. Why on earth should that be? I know of no other version of the card like this. Maybe it was always there and gradually got obscured by blotches of printers’ ink until finally, one engraver simply forgot to include it? The Valet of Cups, tip-toeing over barren ground, has a bejewelled headband with ribbons fluttering – as do the ribbons of his garters – in the breeze, (different from the same valets in the Dodal and the Conver who sport a simple crown of flowers.)

The faces on this deck are very sharp and expressive – with some of the characters smiling slightly - something which endears them across the centuries. The refined lines in the Pierre Madenié Tarot de Marseilles make some of its cousins (like the Dodal) look rather brutish and rough. This is one of those rare things, a warm historic deck, not austere and remote; it has a weathered humanity, softened brows, gentle peerings and dimples. It is quite something for a historic deck to feel this immediate, this alive and yet not to be a cleaned up version of a historic deck with all the faces scrubbed and tweaked. The reproduction captures the age of the deck, but the rich ochre and red, along with the sharpness of the engraver’s line, lift the characters off from the gentle, creamy background and make them seem full of life and stories. Eyes for me are the key to a historic deck which I can use to read with and you sense that the focus of the gazes in the Pierre Madenié Tarot de Marseilles is explicitly beyond the card frames, so this deck will be perfect for the kind of reading where cards interact with each other, court cards beckon to each other across pips and establish a single, concise line of vision. I love how many of these cards bear the ghosts of other cards. I imagined this deck stored in a pile in the Swiss archives and the outline images of cards have bled into the neighbouring cards; we see the ghost of the Roy de Denier peeping over the shoulder of the Reyne de Denier as she tries to keep her concentration fixed on the coin. We see a phantom vision of Trump VI, Lamoureux, reenacted behind Le Mat. We see the ghost of the Bateleur peering over the shoulder of the Queen of Wands, like those spirit photographs where the ghostly form of a relative appears peeping over someone’s shoulder in a family snap taken a week after they passed away. These eerie imprints run throughout the deck and create a captivating binding effect as you start to recognise faces from other cards and wonder which valet it is that you can make out in the background. Yves in correspondence told me the following:

“Regarding “ghost traces,” Wilfried and I discussed this matter during our research and we conclude that this could not be a bleeding of one card to another as you suppose. We prefer to think about a more economical reason: As papers were rather expensive and more specifically the top paper used for figures of cards (and the back of cards too), cardmakers decided to re-use some pieces of paper already printed in black only but which were maybe wrongly cut or with minor defaults. So they decided (not only Pierre Madenié but also some other Master cardmakers) to place this piece of paper printed inside the card and glue the correct top paper onto it, this top paper being later colored in by stencil technique. Up to 3 or 4 pieces of paper were used inside the card as to hide details of figures (they were black colored for this) and so players didn’t know details of the game of the other gamers. It would also increase the rigidity and weight of the card. Our theory is only a theory of course…”

Every single aspect of this deck is flawless; the colouring, the cardstock, the packaging, the faultlessly centred cards; not a single card has slightly off-set borders as often happens with these historic decks. The backs have that unintrusive, standardised, geometric pattern and, like the front of the cards, have a slightly off-white background. It is extremely rare to receive a deck that thrills us in every criteria we can think of and more besides. The cardstock is the perfect thickness and yet the deck as a whole feels quite light and it shuffles beautifully. The corners are square and each card measures 6.5 cm x 12.2 cm plus there are two extra cards which tell a brief history of the deck – one in French, one in English – and which bear the number of the deck, plus an additional card advertising the book Le Code Sacré du Tarot by Wilfried Houdouin. How often do we see a deck this beautiful reproduced to such a high standard? There is usually something that niggles, that we wish was slightly different, but not here. With this deck, those angels triumphantly holding crest aloft really do herald jubilation and crown a Tarot de Marseilles deck that I am sure will now be up there with the best of them.