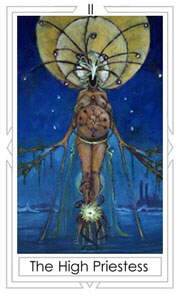 The Mary-El Tarot has fantastic oil paintings, wih a unique but arresting perspective on tarot symbology. A limited edition of the major arcana and four aces was available from the artist, and the full deck has now been published by Schiffer Books.


Card Images from the Mary-El Tarot 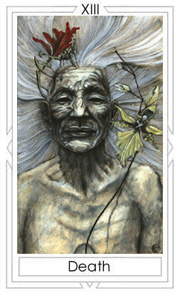 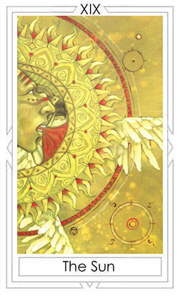 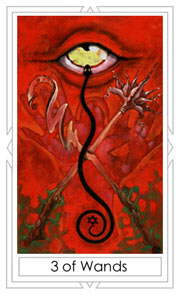 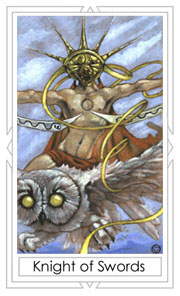 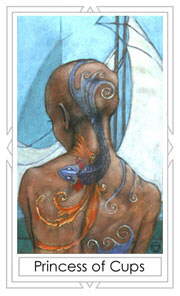 I am one of the legion of people that have followed the progress of this deck from day one (that would be day one, ten years ago!). I am incredibly excited to now have it in my hands, and to be able to work with it. The cards were painted in oils, and maintain the traditional structure of the 22 Major Arcana (with traditional titles), and the four suits (Wands, Cups, Swords, and Disks), with the Court cards entitled King, Queen, Knight and Page. Justice is VIII, Strength is XI. Schiffer includes two extra cards with each deck – one card includes information about Schiffer, while the other card includes other Schiffer titles being offered. I feel very blessed that my book, “Tarot, Birth Cards, and You” was listed on this card, along with Jeanne Fiorini’s “Tarot Spreads and Layouts”. Some days life is just good to us!

In the 192 page companion book – “Landscapes of the Abys”, White begins with the thought that art is the language of the soul. This has never been more evident than in this deck! Part of White’s intentions with this book are to reveal the glorious paths that run through the iconography, the history, and the innovations in the Tarot. She speaks of the Major Arcana as originating in the Middle Ages, in one of the most artistically creative times in all of humanity. That it is a universal key that can be used to write the powerful name of every single thing, including God. The Minor Arcana are seen as the poetry written with the alphabet of the Major Arcana, and are seen to be every bit as important. White sees a perfect symmetry between the two – one representing the world of spirit, the other the corporeal world.

From the book: “The Landscape of the Abys”is the landscape of the Moon, of the High Priestess, it is the geometry of the temple, it is the shape of the tree of life, the Merkabah, the caduceus! It is the doorway between heaven and earth, between microcosm and macrocosm, between the world of eternity and infinity. It is the horizon in all ways.

The Abys is the world of life and death we jump into as the fool so we can experience all of this glorious beautiful life.

There is quite an interesting section on the history of the Tarot, including the following:

Death:
Mr. Emperor, we must dance!

Emperor:
Oh Death, your horrible figure
changes for me all my nature.
I was mighty and rich,
The highest in power without peer.
Kings, princes and lords
had to bow for me and honour me.
Now you come, you horrible form,
to make me food for worms.


Death answers:
You were chosen, will you realize that,
to protect and preserve
the holy churches of Christianity
with the sword of justice.
But haughtiness has blinded you,
you have not recognized yourself.
My arrival was not on your mind.

At the end of the introduction are two charts: one delineating the Major Arcana, and one delineating the Minor Arcana. Following this is a note on the foundation for the “Mary-El Tarot” – that it is built on the three pillars of the Marseille, Rider-Waite and Thoth decks, with deep respect for their wisdom and tradition, as well as the evolving iconography that reflects the inner truth that we all carry.

The cards are presented with black and white scans, a discussion of the card, and the imagery used, upright and reversed keywords, and traditional divinatory meanings. Short quotes are used throughout the book, many from one of my favorite people, Joseph Campbell.

The cards and book come in a medium size lift top box (6” by 11 ľ”) with the trademark Schiffer magnetic close lid. I love this – the box can be inadvertently knocked over (I have three cats!), and the cards are snug in their little home! The background for the box is black, with a red mythical looking bird across the top, followed by the deck name (in red lettering) and the artist (in white lettering). The sides of the box contain deck information and small images, while the back talks about the theme of the deck, “the Alchemy of the Soul”. The back cover for the companion book is black, with only the ISBN information. The front cover is black, with the deck name in red lettering, the name of the companion book, and the artist’s name, in white lettering, in the middle of the cover we see two intertwined ouroboros (the snake holding its tail in its mouth).

The colors in the cards (done as oil paintings) are magical! The symbolism is non-traditional, but entirely representative of the energy of the card. While perhaps this deck could not be used for class use (where the deck of choice is generally the Rider-Waite), it could be used to learn the Tarot by studying the LWB (Little White Book, Companion Book). The research behind this deck is phenomenal! My advise – go buy every single book in the bibliography! Now!

Death – a card that is generally not on anyone’s list of favorite cards, IS a favorite of mine in this deck. I look at it, and I feel calm, peaceful, and in a very good place. White calls Death Tarot’s “memento mori”, that it is there to remind us that we are mortal, and to live a good life, to the fullest, because one day we will die. The imagery shows Morta the Crone, the cutter of the thread of life, giving our soul liberation. The threads of water are her radiating hair, while the flower is a traditional memento mori symbol, as flowers bloom only for a short time.

The Magician stands between the primordial mother, hidden beneath the surface of the water, and the primordial father, with his sun and infinite lemniscate. The two trees are the doorway between the spiritual and the corporeal world, and the Magician, cloaked in the brown of earth, is handing us a Metatron’s Cube (or a Phoenix’s egg). The dark of the abyss shows in that under the Magician’s cloak we only see black – there are no facial features.

The Fool carries a bag that contains himself – all that he is. He is a living Tree of Life, the beginning and the end. The image is a universal key, with all of the elements of creation. The dragons are the twin serpents held by the Sumerian God Enki. The butterflies are symbols of transformation.

In the 2 of Swords is creation through word, the space between heaven and earth, between Yin and Yang. White notes that nothing is solid in this card – what we see is a combination of swords, wings, and locust.

The Knight of Wands draws you in immediately – he is the Dark Knight of transformation and transmutation. It was interesting to note that while I immediately saw this as a black bear, it was originally meant to be a Black Panther. Needless to say, it evolved into a somewhat ambiguous figure with glowing eyes, carrying a lightening bolt. This Knight searches for light, power, and energy, and absorbs them.

The Three of Wands is a card that I hesitated for a moment to include here. I am entirely drawn to it, but it does carry a definite level of energy. White notes that it is the third pillar in the Tree of Life (the pillar of Mildness, which reconciles the pillars of mercy and severity. It is the Kundalini, the serpent coming up from the base of the spine. Here we see quite literally the snake moving up to the eye.

The 8 of Cups shows the lion skin of Hercules draped over a young and innocent child, symbolizing that strength is due to an open heart, and a lack of bitterness. The 8 of Cups acts a s a mirror with the outside world reflecting the inside world.

The 3 of Disks is the journey of the soul into flesh. What we see are a mother, father, and child, all covered in layers of gold fabric (gold carrying the symbolism of having been brought up from the dark reaches of the earth).

I found this deck to be very easy to read with, containing many layers of meaning. I love the symbols, and the esoteric quality. Aside from use as a primary reading deck, this deck could be used in comparative reading, or for journey, meditation or ritual work. I highly recommend it!

This is one of the few decks that I waited years for its release. I mean anticipated, was excited about, anxiously checking-in-on every couple of months sort of waited.

I had stumbled across Marie’s work online at a time when she was marketing her self -published Majors- only deck. I promptly ordered one and began enthusiastically sharing it with my Tarot students as an example of a tarotist with an extraordinary artistic/interpretative gift. It was difficult for new readers to recognize and appreciate its originality and that may still be the case. You have to know the Tarot a bit to appreciate the scope, originality and deliciousness of this deck.

When I opened my new, complete deck I was not disappointed. And this was an enormous relief. Marie managed to hold onto artistic control in the publication of the work. The cards are somewhat larger than average and the artwork throughout was stunning. You must see the Sun and Moon cards especially. How they complement and respond to each other’s oppositeness is one of the breathtaking artistic renditions I’ve seen done of these two cards. But this is only a snippet of the cards that thrilled me to see and read. After a few years it remains a mainstay on my reading table.

What was a delight and surprise was Marie’s accompanying book! The rationale for her artistic interpretations are given in rich, yet easy to read text. For example, The Knight of Disks begins with a quote from Buddha, “Do not dwell in the past, do not dream of the future, concentrate the mind on the present moment.” Further on, she describes the Knight of Disks, “The Hanged Man hangs from the tree and the Buddha sits at its base and the Knights all ride forth to the corners of the kingdom to solve the mysteries of man’s happiness and fulfillment in life. This card is the manifestation of them all into earth, the idea that here and now, in the present, in your life, you have all you need to feed your self and soul, that whatever it is that you seek is not out in the clouds but here in the heart. You are home.” (p. 162) If you know the Knight of Disks, you know how appropriate and yet unique this interpretation is and if you adhere to Buddhist philosophy as well you’re going to love her associations and interpretations even more.

This is a set I put on my recommended reading list for both introductory and intermediate students of the tarot. It’s a must have for any Tarot enthusiast.