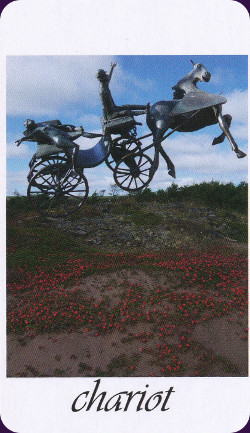 The Nameless Tarot (aka The World Was My Oyster) is a photo-collage deck created from the artist's worldwide travels. It has 83 cards: the standard 78 plus extra versions of five of the cards. The images range from quirky to serious to humorous, but all have a very solid tarot foundation.


Card Images from the Nameless Tarot 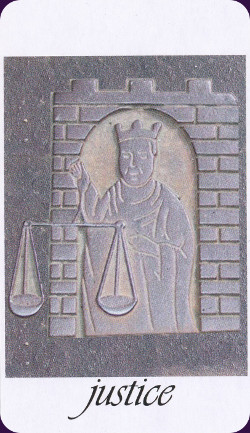 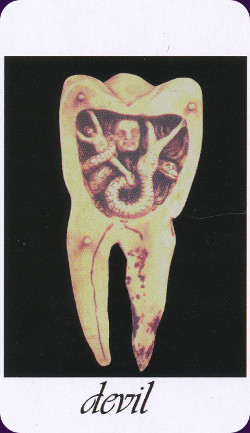 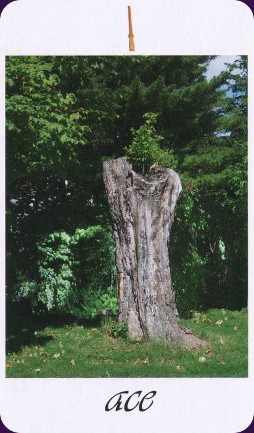 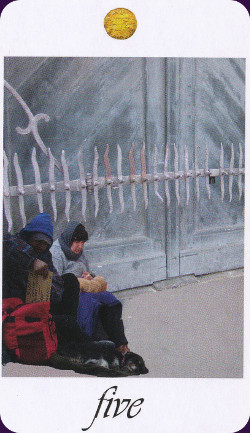 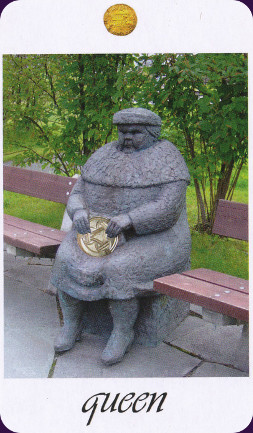 The Nameless Tarot aka The World Was My Oyster is a photo-collage deck that is the result of eight years' travel and work on the part of a forum-member who prefers to have her forum-alias associated with the deck, falling under the Rider-Waite system but often with vastly different symbolism in the images. It contains an unusual eighty-three cards, five of which are second cards for the same card-titles in the deck - I hesitate to call them doubles. Four of those occur in the Major Arcana, the fifth in the Pentacles suit.

This deck was issued in a public and a tiny friends-only edition, which is the one I received. The friends-only edition has a different, non-reversible cardback: the general edition has a reversible back of two green leaves on a white ground, elegant and tasteful. It can be ordered in standard cardstock or a linen version: mine is standard, which is light, whippy and subtly laminated, but which I suspect won't stand up well to heavy-duty shuffling over a long time. The difference in price for the linen cardstock is negligible: I really urge anyone considering buying the deck to invest in quality. The big positive about this stock is that it did not arrive blowing off a chemical smell, as so many laminated decks do. I cannot comment on the packaging the mainstream version comes in either: mine came in a drawstring bag that was obviously chosen for me personally. It was accompanied by a title card (in my case personally inscribed) and a blank card, making eighty-five cards in all. The Major Arcana cards are not numbered, refreshingly, and have their titles below the image. The Minors have a suit-symbol at the top, and a number (or title) written in words beneath.

One of the things I like about this deck is its sense of place, and that is greatly enhanced by the use of public statuary in very many of the images and by things like airport departure gates and a train platform (the Eight Cups) that on very close examination turns out to be in Glasgow. None of these location-pins are intrusive, though - unless you are very familiar with the scene or are trying to identify it, they are anonymous, archetypal places-of-transit.

That being said, I am not generally a huge fan of photo-collage decks, although I'm glad to own more than one exception, and this is one of them. There are specifically two images that don't work for me on technical grounds: the Tower, which is a great concept, but where to my eye the sea of flames licks quite unconvincingly around the base of the Tower and against the sky without any heat-haze, and the Sun, which while it is bright and optimistic and summery, seems awkward to my eyes. Other people's experiences of these cards may differ: already one of my friends has pointed out the Sun as one of their personal favourites in the deck.

Some of the cards featuring living people rather than statues are masterly. the Nine Cups is a delightful, leprechaun-like chap in a shaman-like setting, a cauldron hanging over his fire and a long-handled spoon in his hand. The Magician shows a woman with The Hair, The Cloak, and a great selection of magical items on a fantastic old wooden table in front of a lovely old wooden wall. Her posture, though, is incongruous: it and her open smile says "Good Customer Service"! And the humour in this card is reflected by humour elsewhere in the deck: the plethora of choice represented by the Seven Cups, in this deck shows an elderly couple trying to choose between different brands of toilet paper in a supermarket! And here is an observation of mine: spirituality is in no way compromised by humour. Just because something amuses us, does not mean it is insignificant. So don't discount the Queen Pentacles, a statue of a seated woman, very overweight and wearing a hat and a slightly grim expression, who reminded both me and my friends instantly of me!

By contrast, the Lovers is a lovely, lovely statue in a forest setting, of two diffuse beings of no particular gender blended together, a part of each other, kissing gently. Another favourite is Justice, a rather lovely bas-relief of a crowned robed man holding scales. And never discount the Devil! The Devil-as-Toothache is absolutely inspired, bordering on genius: we see a cross-section of a tooth with evil beings in it, torturing the owner of the tooth. Judgement is quite marvellous and ambivalent: it could be painted on the finest silk, or on a cave-wall.

The Chariot is the first of our multiples: a brown boy in a rickety home-made cart with ancient truck tyres bumping along behind a dromedary is my personal favourite, over a metal statue of a horse-and-carriage in full flight, off-balance and about to fall - and static like that for all time. I also have a slight preference for the brown, fluid Hanged Man in a waterfall reminding me of Dolores Ashcroft-Nowicki's Shakespearean Hanged Man, over the brown statue of a bound angel hanging from the sky and fading between dimensions. Gregory has a known admiration for the Death archetype and has produced two superb and challenging cards: I incline slightly towards the one that reminds me of the Four Swords in general RW parlance. I cannot choose between the two Hermits: a dusty guru sitting in an archway of a stone wall in harsh daylight, or an oil lamp in utter darkness only just picking out a wrapped, hooded figure. And of the two Fives of Pentacles, the only Minor Arcana with a choice, I incline towards the one that doesn't feature stained glass simply because I think the stained-glass motif in this card has been done-to-death in too many decks, although here it is done very well.

I was about to say I can't pick a favourite card - then my eyes lighted on the Ace Wands. A tall, dead tree-stump shaped not unlike a flowing dress, with a small sapling growing out of the neckline, perfectly sized to be a head? What a perfect image! The Seven Wands, with all its painted masks, has a reference in the bottom-right corner to the same Hieronymous Bosch painting that inspired the Three Wands card in the Bosch Tarot deck - it's ridiculous how much that chance repetition between two decks that I own pleased me. Oh, and the King Wands - ithyphallic? I think 'ee ith. You can see why it took eight years to do the photography for this deck: gregory had to travel far and wide to find just the right statues and settings.

I'm always pathetically grateful when Tarot designers don't repeat dreadful Tarot clichés, like three swords in a cartoon-heart for the Three Swords (couldn't at least one person make it a bloody, dripping, anatomically accurate heart?) I thank Gregory for not falling in that trap: she took us, instead, to the seaside at sunset, and a statue of an unconscious female nude with a male nude bending over her in grief. Sadly, she succumbed to the temptation of representing the energy of the Six Swords by a boat moving away, another well-worn Tarot cliché that could do with being strictly avoided.

The cards I like least in the deck for technical reasons are as mentioned the Sun, the Tower and the Six Swords. There is a fourth I don't like, though for a completely different reason: the Ten Swords. This is a beautifully executed card of a man in darkness, naked to the hips, hanging from his arms, his back a raw and bloodied mess from whip-wounds. I believe it was taken while she was in my country - I assume in a colonial re-enactment context. The makeup for the wounds is superb: they look real, they look genuinely agonising. I can hardly bear to see the card when it comes up. I have never yet redacted a card from a deck even when reading for "nervous nellies" - I'm half-inclined to redact this one for my own personal comfort (though I know I never will).

Despite the fact that I have a known prejudice against photographic decks, I am fond of this one, and not for reasons of friendship. Like many decks it is uneven, but the few cards that are huge failures in my eyes are more than compensated for by the great numbers of very successful and engaging images. I doubt if I've ever seen a deck where I liked all the cards and this is no exception, but it is quirky, charming, humorous, memorable, and as I've been finding lately, it works very well in public readings. And I do not believe that it will date: you could do worse than to invest in an unusual, delightful and useful deck like this.