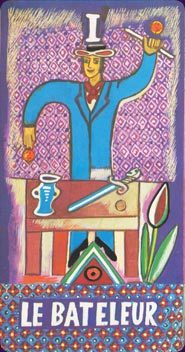 The Piatnik Wien Tarot has rather extraordinary bright colours and textured patterns making up its partly historical and partly modern Tarot scenes. The minor cards are French style, and have arranged pips on the numbered cards. 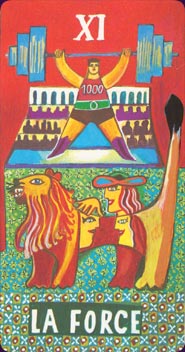 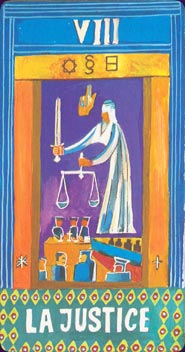 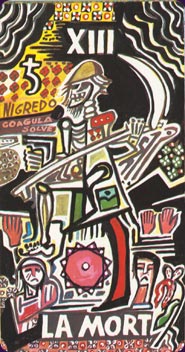 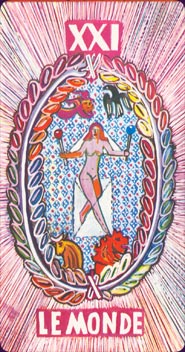 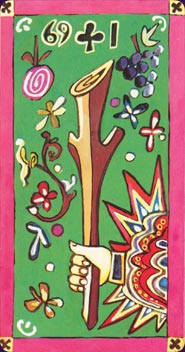 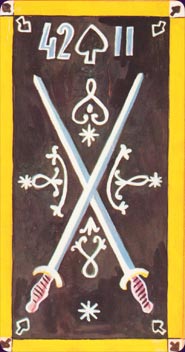 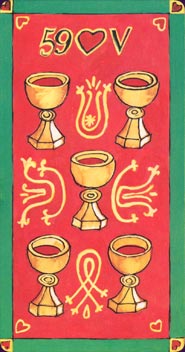 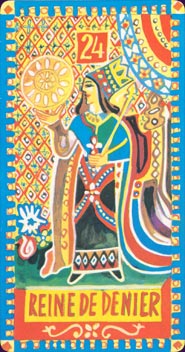 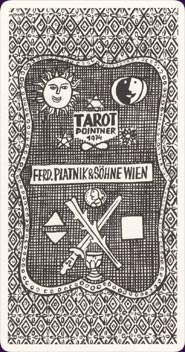 The "Piatnik Wien Tarot" was a major (to me) find on the New Age Discount Books site (the Mondazzi site). What I have intuited from the packages, or found through research on the Internet, is that the deck was published in Austria in 1974, and is also called the "Pointner Tarot", after the artist, Rudoplh Pointner. I was unable to locate an ISBN number anywhere, but did note the following on the bottom of the deck packaging: "Piatnik Tarot", under which was printed "Nr. 2825". It appear that there was more than one printing, and I have no idea which printing my specific deck came from.

The cards themselves are 2 3/4" by 5 1/2", on sturdy card stock. The large size is a bit difficult for smaller hands to work with. Only the face of the cards is glossy. The back of the cards are done in black and white, with a 1/4" white border. In the middle of the card, against a patterned background, we see a Sun and all four phases of the Moon. Under that is the name of the artist and the date published (Tarot Pointner 1974). Under this is the name of the publishing company (Ferd. Piatnik & Sohne Wien), with the four suits represented under it. To the right hand side of the suit graphics we see a white square, and to the left hand side of the suite graphics we see two white triangles, back to back, with one point upwards, and one point downwards. You would immediately be able to tell if a card had been drawn in the reversed position.

The faces of the Major Arcana go completely to the edge of the card. The art is two dimensional and somewhat cartoonish, with eye-popping coloring in reds, yellows, blues, greens, and purples. The card number in Roman numerals is at the top of the card, with the card title in the bottom in French. The card titles are traditional, with Justice as VIII and Strength as XI. For the most part, the scenes resemble those of the "Rider-Waite Tarot". The High Priestess is shown in profile, facing the right hand side of the card, with a female figure standing behind her, and a Dove in the upper right hand side of the card. Le Pape appears standing between two pillars, with a Dove above him, and an insert with two figures, one in red and one in green, beneath him. The Le Chariot card inserts some humor with the traditional Chariot on the top portion of the card, with a race car inserted below it. Force shows a weight lifter in the top portion of the card, with the traditional female figure and lion in the bottom portion of the card. The Fool has his arms hanging down, forming a triangle beneath his face, rather than behind his back.

There are two extra cards to the deck that appear to represent Tarot spreads. On one card we see a linear three card and a box-like five card spread, while on the other we see a seven card spread done in the form of a pentacle.

The LWB (Little White Book) is unusual in that it gives no publishing information what so ever (except for listing the name of the publishing company on the front). A bit of Tarot history is presented, which is somewhat credible, even though it does wander a bit. The mystical (esoteric) significance of the Tarot is mentioned, along with its psychological importance (referencing Carl Jung and the process of individuation).

The Major Arcana are presented in text only (no scans), with a short discussion of the card and upright meanings only. I would like to share a few of the meanings:

I. The Juggler, or Magician (Orion): Who dares, wins!
V. The Pope, or the High Priest (Jupiter): Religious inspiration, responsibility, some doubts.
XII. The Hanged Man: Reversal of values, ordeal, tribulations.
XVIII. The Moon: Peril, a trap, warning, trial.

This deck, with its modern art imagery and fierce coloring, is certainly a collectors item. It is also a highly usable deck, especially for those clients that are "stuck" with traditional images and relate to the coloring and imagery here. because there are no illustrations on the cards, the reversal of elemental associations for Pentacles and Wands has negligible impact. Set aside the LWB, and treat it as a traditional deck. I found it great fun to peruse the Major Arcana and identify the esoteric and astrological symbols set amongst all that color!