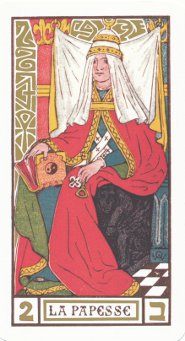 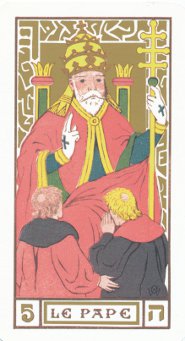 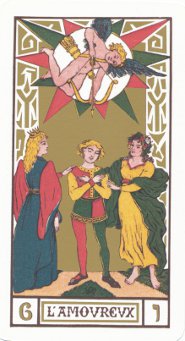 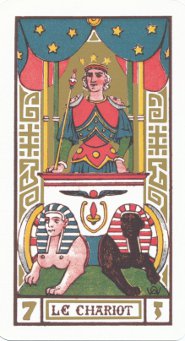 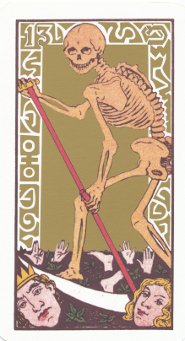 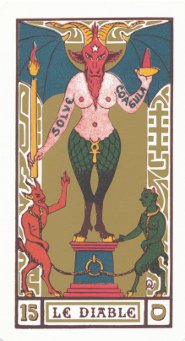 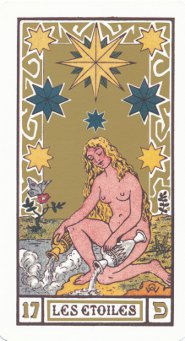 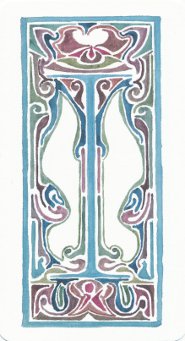 Oswald Wirth was a Swiss occultist that is mostly remembered nowadays for designing one of the first Tarot decks with metaphysical symbolism in the late 1800’s. His deck changed a little in imagery due to later re-workings, but remained true to his original goal of ‘illuminating’ the Tarot De Marseille. He felt that with his new design that he was restoring the hieroglyphical purity that had been lost throughout time back into the Tarot. Oswald also wanted to show the Tarot in the light of ‘freemasonry’ and added design elements that suggest the process of initiation into a lodge/freemasonry.

His deck first appeared in the Tarot literary classic ‘Tarot of the Bohemians’ by Papus. In 1927 Wirth published his own now classic book ‘Tarot of The Magicians’ to coincide with the release of the deck that is the subject of this review. This deck was drawn in 1926 as a revision of the deck he drew for the Papus book ‘Tarot of the Bohemians’. In this revison pack, he included sacred geometric shapes, more colour and provided a lush gold ink background for each of the twenty-two images. Wirth only concentrated on the 22 major arcana cards, why he never wrote or drew the minor arcana is a bit of a mystery. Wirth is the true artist of this deck and his signature appears on each card face. This deck is not a redrawn deck like most of the Wirth decks in the past and present have been, so it is an excellent tool to use in relation to the writings of Wirth or Papus.

The deck is rendered faithfully true to the original in this edition. Each card appears as the gilded iconic masterpiece Wirth intended them to be as each of the 22 lames features a golden background and a geometric/mosaic pattern surrounding each image as in the 1927 pack. The titles are in French (all text is gold metallic ink as with the rest of this deck)) with Wirth’s choice of Hebrew Kabbala letters on them. The colours used in this deck are very subtle and the whole mood of the deck is very art deco, which gives this deck a very calm meditative feel. In certain light the images appear to look 3D due to the ornate backgrounds.

There have been other editions of Wirth’s deck that have not been correctly executed according to his colour descriptions in his ‘Magicians’ book, but this deck does follow his colour correspondences very well. ‘Le Pendu’ is a good example of how good the colours are in this deck as Wirth states in his book that the trees next to ‘The Hanged Man’ should have bark that is blue turning to green at the bottom, and amazingly this deck does this. Faded line drawings have been another flaw in some Wirth decks, but in this deck the line drawings are all intact so the faces of arcanums 6 and 21 are displayed in all of their fine glory. I could only find one flaw in this deck and it appears to be in every online scan of this card that I have seen, in Arcanum 20 the neck of the angel seems to be missing a bit of pink colour. What I see as a mistake may in fact be the way the face colour was intended to be as blowing an instrument might give one a flushed face. This is a special deck, because it is the only available Wirth deck that very closlely corresponds to Oswald’s writings on the Tarot.

The deck measures approximately 8 x 14 cm and is of good sturdy, but flexible cardstock. There does not appear to be any type of sheen applied to these cards and they have a quality satin like finish to them. The original back to this deck in 1927 was originally a pale blue and they have used a similar shade of blue here, but added a multi-colour art deco design not unlike a stained glass window. I have included a scan of the back here at Aeclectic along with other sample cards from this pack. The little white book is in the original French Wirth wrote them in. This deck is printed in Canada (at this time it can still be ordered directly from the publisher), but most readily available in Europe. The deck is moderately expensive for a 22 card pack, but for those who long for a more quality and accurate Oswald Wirth Tarot deck this is just a minor inconvenience as the deck is beautiful and a real treasure to behold.