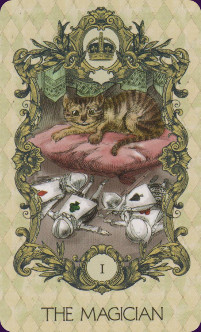 The Tarot Card Alice is a decorative Korean-published deck of 22 cards. Its cards are based on the illustrations from Alice in Wonderland and Through the Looking Glass by Sir John Tenniel. The cards are titled in English though the companion book is in Korean only. 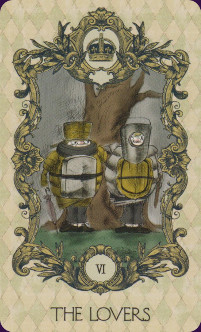 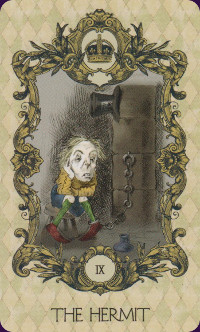 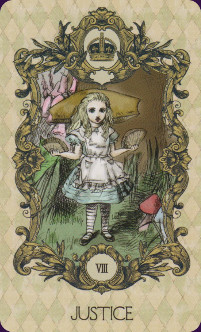 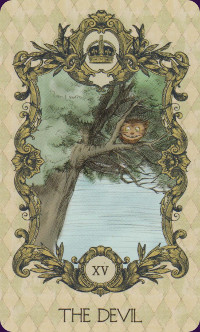 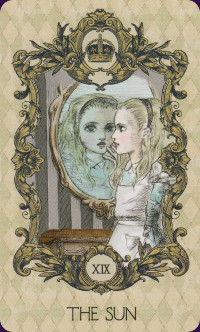 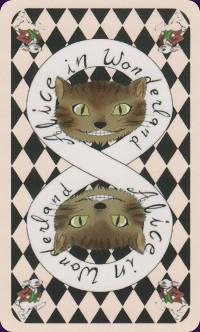 Alice in Wonderland and Through the Looking Glass hold a lot of potential for tarot decks, and the original and delightful illustrations by Sir John Tenniel have inspired more than one Alice tarot. Whether the deck is successful or not hinges largely on the selection of the most appropriate image to express the sentiment or divinatory meaning of the tarot card. Tarot Card Alice has copied and coloured Tenniel's images from both Alice stories, and renamed them, as part of a Korean Major Arcana set.

It is inevitable that this deck will be compared to the Wonderland Tarot Deck (1989), which is also based on Tenniel's illustrations, but is a fall 78 card deck. There are in fact very few similarities between the decks – a few cards use the same scenes, but for different arcarnum. Tarot Card Alice uses the image of the White Rabbit with a trumpet in his hand as The Fool, while the Wonderland Tarot Deck uses the same image as Judgement. A picture of Alice's hand dropping the White Rabbit onto a window is used as The Tower by the Wonderland Tarot, and as Death in Tarot Card Alice – and there any crossovers end.

More disconcerting is the repeated use of several characters to depict many different cards. The Cheshire cat is both The Magician and The Devil. The knitting sheep is both The High Priestess and The Empress. Alice is depicted as Justice, The Star, The Moon, The Sun, and appears in The High Priestess, The Tower, and The World.

There are some other rather curious choices of image – some apparently not of Tenniel's hand… The Wheel of Fortune Is an Invitation from the Red Queen; The Chariot is depicted as several chess pieces at the edge of a chessboard, next to a doorway. Temperance is shown as the portly Father William balancing an eel on his nose – this is a Tenniel illustration, but a particularly unattractive one for such a serene card.

The Star and The Moon are basically the same event – The Star being a poorly ‘Tennielised’ image of Alice stepping through the looking glass, and The Moon is a direct copy of Tenniel’s original illustration. Personally, I think that there are so many other images - the Mad Hatter’s tea party, the court case, the White Queen, Jabberwocky, the garden of live flowers, the train carriage full of bizarre travellers, to name but a few, that could have been used instead of the unimaginative repetitions seen in Tarot Card Alice.

This is a standard 22 card Major Arcana with no renamed cards. Justice and Strength have had their positions swapped. The cards measure 65 x 110 mm, which is about the size of a standard playing card deck. The card stock is fairly light, well finished, flexible and quite glossy. These cards are easy to shuffle – being the size of playing cards they have a familiar feel and fit into the hands nicely. The print quality is good – crisp, clear images with no blurring. The colours are fairly muted and keep to the confines of a Victorian era palette. With the exception of deep crimson these are generally "tea" colours which compliments Tenniel's original illustrations.

Each image is contained within an elaborate leaf-and-curlicue frame, surmounted with a Crown. This is bordered by a pale yellow-and-green diamond pattern. Each card’s number is contained in a small frame beneath the main image, and the card’s title, in simple black print, is beneath this. The print on the back - 2 Cheshire cats contained within a lemniscate bearing the words "Alice in Wonderland", on a black and white diamond pattern, with white rabbits in each corner – is fully reversible.

The cards are part of a book and card set – both are presented as a foldout, inside a plastic cover. The cards come packed in cellophane, and framed in soft black foam plastic to protect them. The guidebook is well illustrated with large reproductions of each card in sepia and tea tones. The information in this (regrettably for me) is in Korean, so I am unable to evaluate its quality and depth.

Tarot Card Alice is a lovely deck for collectors, or for those Alice in Wonderland fans out there. It is a fully functional Major Arcana divination deck. Need I point out the limitations of divination with the Major Arcana only? As with all tarots, it will work well for you if the choice of images sits well with you. Otherwise Tarot Card Alice something of a novelty, but an extremely decorative one nonetheless.