The Rock &am Roll Tarot is a groovy deck featuring a digital collage of popular musicians and rock stars of the fifties, sixties, seventies, eighties and nineties - Elvis is the Emperor, Madonna is the Libido card. The popular deck was published in two editions of 500 copies in 2000 and 2002, and the second edition has extra 'alternate' cards. 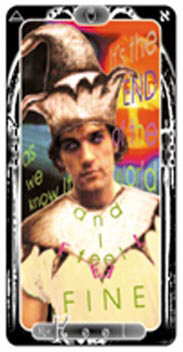 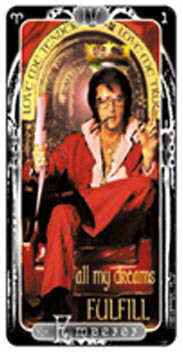 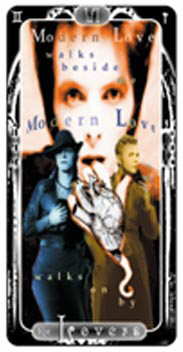 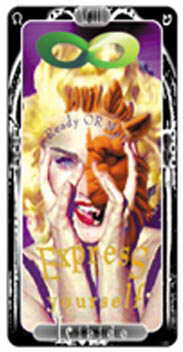 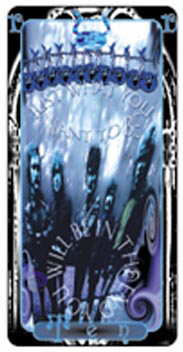 The Rock and Roll Tarot by Chris Paradis is very clever. Only a person with a strong knowledge of and feel for the history of rock and roll and the personalities within it could have produced such a deck, and clearly Chris has done the research. The Rock and Roll Tarot is a great collector's deck but it is more than that. It’s also a fantastic reader’s deck.

Chris has chosen as the four suits: guitars for air, albums for earth, muse for water and voice for fire. Within each suit, personalities and lyrics are chosen that manifest the energy of each particular card.  Hence the essence of Albums (Ace of earth) is represented by Cher, an earthy woman, singing "put your tiny hand in mine, there ain’t no hill or mountain we can’t climb".  Jimi Hendrix *is* the essence of air, "excuse me while I kiss the sky".

The major arcana heave clearly received a lot of thought as well. Frank Zappa is the Magician, Tina Turner the High Priestess, Elvis Presley the Emperor, Madonna is Libido, John Lennon is Death. David Bowie represents the duality of the lovers. Nice. A person with more knowledge than me on the specifics of the history of rock and roll in the last fifty years will find even more meaning with the chosen ones.

In the introduction to the deck, Chris Paradis speaks of the characters on the cards: "They reside in the temple of the Juke box and their lyrics invoke love, thought, passion and comfort."

While this is not a deck I would use frequently, I can certainly envision some times when a reading such as these cards can give would be appropriate, especially at times when a more light-hearted view of the world is important. I really enjoy the sense of personal history the deck gives me, having grown up with the music of most of the musicians in this deck.

The Rock and Roll Tarot is created with digital art and images, altered and recreated in Adobe Photoshop, and with the lyrics imposed on each card. The printing is limited to 500 decks so be quick.