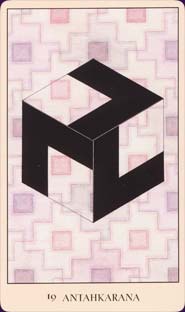 The Sacred Geometry Oracle by Francene Hart has 64 cards with a mix of stunning intuitive geometric drawings, and more prosaic pen-and-ink outlines of shapes and forms. 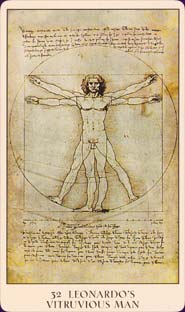 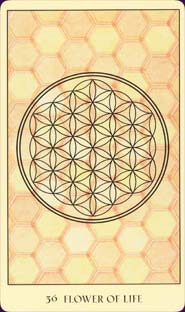 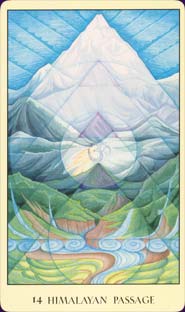 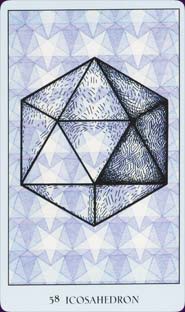 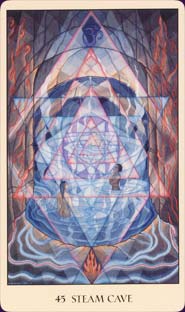 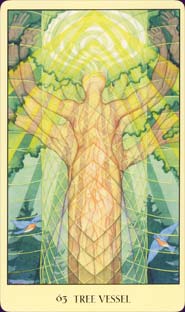 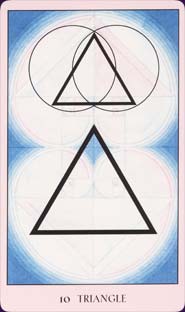 Sacred geometry can be explained as the spiritual beliefs inspired by geometry and the geometrical forms found in nature, what artist Francene Hart calls the "ancient science and sacred language of geometry". These forms, shapes and patterns can be found everywhere from crystals to plants to DNA, and have been used in art and architecture throughout the ages.

"Anyone who has ever gazed at a spider’s web, meditated on a mandala or yantra, visited a pyramid, walked a labyrinth or peered through a microscope has felt the effects of sacred geometry."

A visionary artist who lives in Hawaii, Francene Hart conducts workshops on mandalas, creativity and sacred geometry and has written several other books, including the self-published Seeking Balance: An Artist’s Journey into Sacred Geometry. The Sacred Geometry Oracle is her first oracle deck, and brings an artistic and intuitive approach to geometry by blending a 'right-brained' style with a 'left-brained' style and marrying intuitive illustrations and mathematic constructions. (Not to be confused with John Greer’s deck of the same name from Llewellyn, which combines sacred geometry with a practical and hands-on approach).

The art of the Sacred Geometry Oracle cards is divided into two distinct styles. The majority of the cards have rather pedestrian pen-and-ink outlines of shapes and forms on a tiled pattern background, while there are also a few visually different and really stunning multi-layered, interlaced illustrations. These incorporate a geometric theme or pattern – of course – and The Tree Vessel, the Divine Doorway, the Himalayan Passage, Sacred Union are particularly breathtaking.

The 64 cards are arranged in order of the number of points or lines, from a circle and mandala through to the torus (a donut shaped construction), the Kabbalistic Tree of Life and the icosahedron, a solid with twenty equal triangular faces. Each card is numbered and titled with a keyword, and framed with pale pastel borders that suit the colouring of the card. They are a good size, tall enough for to show the image to best effect and yet not wide enough to be difficult to hold or shuffle. The backs have an indigo border inset with a circular torus design in rainbow colours, on a background of stars and seven lotuses.

The packaged set of the Sacred Geometry Oracle also includes a companion book which is 144 pages in length, but really doesn’t have that much information for its size. The book contains a few pages of introduction from the artist and the reasons for the cards’ genesis, suggestions for reading the cards, and five original spreads with a geometric aspect, eg. the Golden Spiral or the Star Spread. The rest of the book covers the cards, with 64 larger-than-life black and white card images filling an entire page next to the card interpretation, which offer reversed as well as upright meanings.

The Sacred Geometry Oracle is an interesting deck and introduction to sacred geometry, intended to raise consciousness, gain insight into life’s challenges, and restore one’s connection to the world. The intuitive illustrations are simply stunning; even the simple cards were fascinating to gaze upon and invited the mind to trace their patterns and receive the wisdom therein.