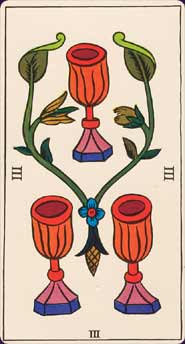 The Spanish Tarot is a bilingual Tarot deck titled in Spanish and English. The 78 cards are a reproduction of an eighteenth century Liguria-Piedmontese woodcut deck.


Card Images from the Spanish Tarot 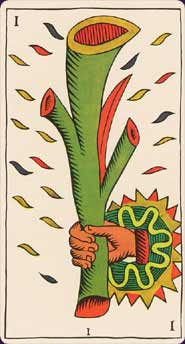 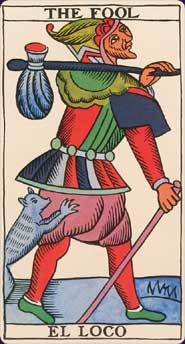 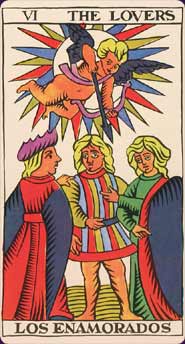 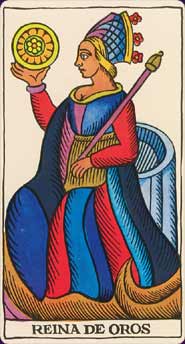 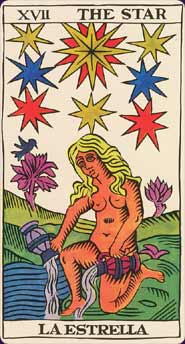 This tarot is simply sensational. I’ve been using this tarot for almost 16 years and even when I’m a tarot collector I have never found another one to replace it during my readings.

Its colors, its images are literally impressive and allow focusing on the reading, bringing along (at least for me) a lot of useful information not only for predictive purposes but also for use in meditation.

This is a deck full of magic and secrets... but they only can be seen once you have worked with the cards for a long time, and after creating the relationship needed to understand their messages (like with any other tarot.)

It is a product of the well known Spanish publishing company Fournier, reproducing the woodblock print of the Liguria-Piedmonts’ Tarot printed in 1736. The deck contains the traditional 78 cards: 22 major arcana cards and 56 minors.

The court card names are given in Spanish only. The Spanish names for the suits are: Bastos (wands), Copas (cups), Espadas (swords) and Oros (coins/pentacles). Wands are curved and Swords are straight. A small roman numeral at the bottom of each numbered suit card shows its number and orientation. This deck is available as the Spanish Tarot (Fournier version) and the Spanish-English Tarot (U. S. Games version).

The backs are beige (with diamond shapes) with a flower in the center of each diamond. The faces carry a beige background, with a thin black border. The Major Arcana follows the traditional titles, with Justice as VIII, and Strength as XI. The titles are placed in English on the top and in Spanish at the bottom of the cards.

It comes with a little book that accompanies the deck and it is written in Spanish, English, and French. Mr. Stuart Kaplan of U.S. Games is responsible for the English translation presenting a very interesting commentary about each one of the cards.

I highly recommend this Tarot to all of those who are looking for a real traditional tarot, with the necessary colors to catch your eyes and to empower your sensitivity and mind.