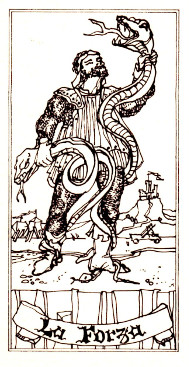 The Tarocchi di Valentina Visconti per il Palio d'Asti is a collector's edition deck of 88 cards (there are an extra 10 cards beyond the major and minor arcana). The deck commemorates the visit of Valentina to the town of Asti in 1389. 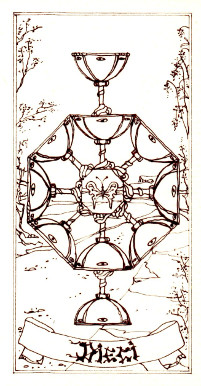 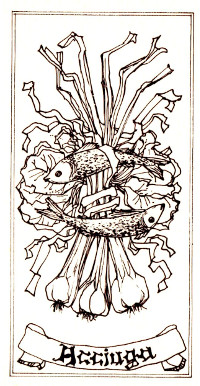 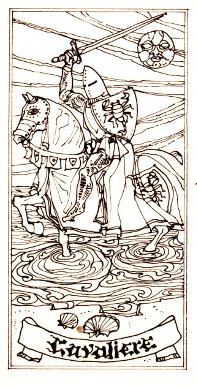 Recently, as an entirely unjustifiable present to myself, I acquired this deck. Ironically, it arrived on my birthday, emphasising its gratuitous nature, which quite pleases me.

What with exchange rates and freight it cost me over $300, which is why I didn't get a hold of it when it first caught my eye a couple of years ago, but seems to me to be quite reasonable now that it is in my hands.

An eighty-eight card deck, sandwiched between the Major Arcana and Courts and the Minor Arcana, there are ten extra cards. Like the rest of the deck they are delicate black and white line-drawings and have the Italian titles Anchovies, Racing Silks, Rooster, Freedom, Astuteness, Intrigue, Courage, Spurs, Money and Acquaintance. (No, I don't speak Italian, I have the dubious benefits of an online translator available to me.) To me, these cards seem to work like extra Majors rather than extra Minors. If I were one to re-order decks after shuffling (which I'm not), I would be tempted to include them at the end of the Majors before the Minors, rather than between the Court Cards and the Pip cards in the Minors.

The cards are smaller than most Tarot decks: at 56mm wide they are significantly narrower than playing cards, and are 110mm tall, just slightly taller than playing cards. They feel really nice in the hand, with the narrowness making up for the extra thickness of the whole deck. The "box" consists of a rectangular tube which is open at the top and bottom in laminated cream card, with an inner longitudinal wrap of unlaminated brown card which supplied extra reinforcement as well as the top and bottom. There are no title cards, and the LWB, also on stunning quality cream paper, is entirely in Italian, and does not include a section on the divinatory meanings of the cards. This really isn't a problem for someone who has a passing familiarity with the Tarot and/or who scries into the images of the cards, and in the short time I have had it, I find it very useable, indeed, very seductive.

My interest in very early Italian decks has led me down the path of having haphazardly researched the Visconti family, but for those who don't know much about them there is this, and specifically on Valentina there is this.

In keeping with the constant referencing of an individual and a family in the early Renaissance period, the font on all of the cards is a prickly, early font that is not quite Gothic. and the titles of the unnumbered majors are on finely detailed scrolls at the bottom of the images. Each card seems spare and clean, but on second examination is crammed with detail: for instance, I am looking at the "Acquaintance" card right now, and for only the first time have noticed the compasses and set-square on the ground, the oak-leaf on the vase, and the rising snake in the background.

The imagery of most of the Majors follows a roughly similar line to most of the early Visconti decks, with the notable exception of Strength, which in the Viscontis tends to show Hercules and his lion, but here shows a stocky, bearded man wrestling with two enormous snakes. Also following along traditional Visconti lines, it's not just the Fool standing at a cliff but several of the Majors: the Emperor and Empress, the Lovers (who are alone on the card, accompanied by only three flying doves), Justice, the Hermit and Luck (The Wheel of Fortune). I suppose the lesson here is that it's not only fools who can find themselves in unexpected danger.

The Minor cards are, of course, unillustrated as you'd expect, but they are evocatively decorated with the same lightness of penmanship as the rest of the deck, and even for someone who is not used to unleashing their intuition in the absence of pictures, should be quite readable - they certainly are for me.

Even for its price this is an unexpectedly rewarding deck, and I am delighted with it. I look forward to a long and happy association with it, down through the years.