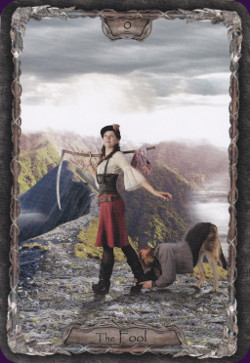 The Tarot Gothica has 78 darkly themed cards, with digitally manipulated images created from the artist's photographs of real people in goth attire and costumes.


Card Images from the Tarot Gothica 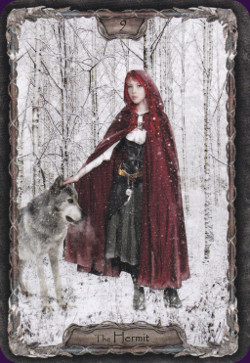 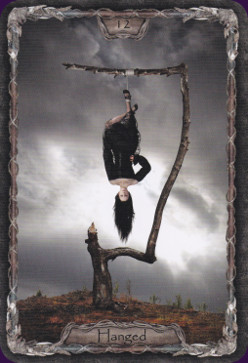 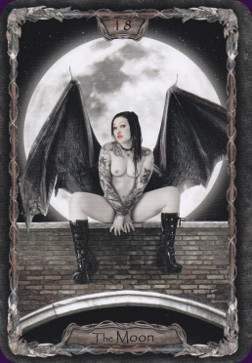 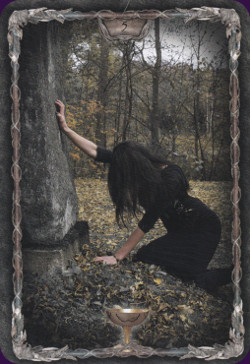 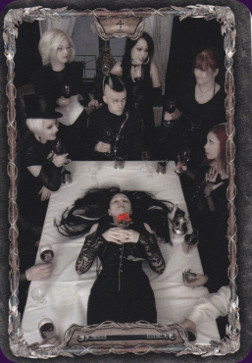 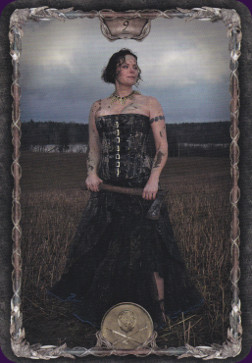 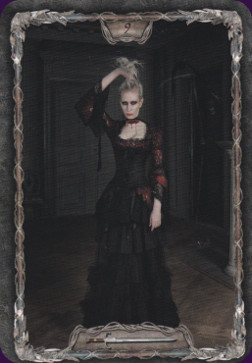 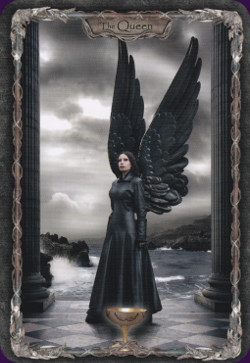 A post-modernism–meets–Goth–Zen atmosphere pervades this deck where the user is cast in the role of voyeur, no, outsider, or onlooker perhaps to an idiosyncratic subculture. Tarot Gothica focuses on the interests of Goths and the Gothically inclined.

This is a 78 card fully illustrated tarot. The Major Arcana is 22 cards with no significant departures from the Rider Waite Smith standard. The only card to be renamed is the Wheel of Fortune which has become Destiny. The Minor Arcana is 56 cards in four suits – Batons, Chalises (sic), Swords, and Coins – each with 10 number cards and 4 Court cards, Princess, Prince, Queen, and King. The cards' numbers and titles are framed at the top and bottom of the image.

The cards measure 90 x 127 mm which makes them a fair bit wider than many popular tarot decks. The card stock is good – light and thin without being flimsy; and quite flexible. They are smooth and low gloss. They fit easily into the hands, and shuffle smoothly.

The print quality is excellent. The images are crisp and clear with no misprints or blurred pictures. The images themselves are photographs, and digitally altered images. In true Goth fashion the palette is generally quite dark with flashes of jewel colours scattered throughout the deck. Largely posed portraits and tableaux featuring models in classic Goth clothing – romantic, vampirey, lots of corsetry and black lace. There are some interesting images in this deck, but also many conventional ones (of the type frequently found in Goth lifestyle magazines).

Each image is surrounded by a leafy frame, and a dark, earthy border. The design on the back of the cards – a vampire woman atop the “Tarot Gothica" logo, and a golden coin printed with a tarot inspired coat of arms – is not reversible.

This compact box set of cards and guidebook comes packaged with Schiffer's usual flair – a solid cardboard box with fold back lid, magnetic clasps to keep the box shut, and ribbon hinges to keep the lid from flopping around. The box is printed with glossy images from the deck, and is sturdy and made for travel.

The Guidebook is a compact 80 pages in black and white. There is a short preface that gives the user brief instructions about reading the cards. No layouts are included. The Major Arcana cards have a few lines of summary, and good description of the cards meaning, and a line or two of 'Advice '. The Minor Arcana have a keyword, and upright and reversed divinatory meanings. These interpretations follow close to generally accepted and popular meanings – they are sharply observed, modern and relevant.

This deck will certainly have appeal to its intended audience – Goths and the Gothically inclined, as well as those who embrace alternative and darker lifestyles. This somewhat idiosyncratic deck is not suitable for beginners, but experienced tarot readers will find this deck easy to master.