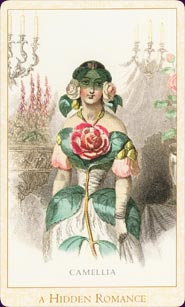 The Victorian Flower Oracle is a charming set of 40 cards that brings the symbolism and language of flowers to life. Each flower is depicted as a woman, dressed in petals, in these cards based on the art of Victorian artist, JJ Grandville. 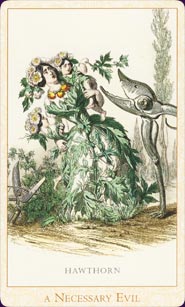 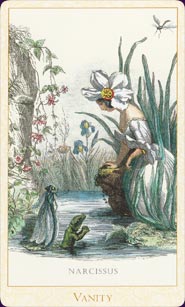 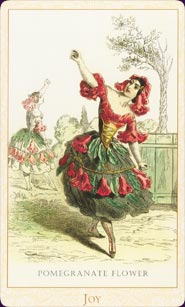 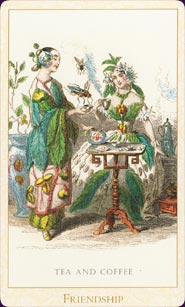 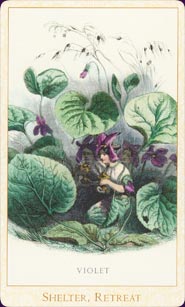 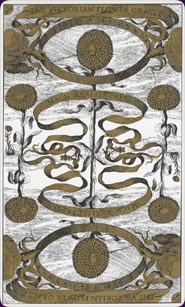 The Victorian Flower Oracle is the second Grandville-inspired deck from the creative team at Magic Realist Press. The Fantastic Menagerie Tarot was based on one of JJ Grandville’s social satire, while this Oracle deck is based upon another of Grandville’s works, Les Fleurs Animees. First published in Paris in 1847, the book was translated into English as ‘The Flowers Personified’ and was illustrated by hand-coloured plates of woman as flowers.

The Victorians loved flowers and also used bouquets to convey specific messages through the positioning and types of flowers. According to the companion book, they had elaborate systems to explain the popular language of flowers: the red rosebud turned to the left in a bouquet, meaning “you are pure and lovely”, or wild tansy with the less-encouraging message, “I declare against you”. The Victorian Flower Oracle follows this floral theme and that of Les Fleurs Animees, with the central focus of each card the flower-personified, a woman in the dress and hair-style of the mid-nineteenth century and wound about with the leaves and petals of her type of flower.

All of the 40 Oracle cards are attractive, with scenes of life and living linked with well-known flowers and plants: Verbena (Revenge), Lilac (A Message), Honeysuckle (Games), Pansy (Wishful Thinking), Pomegranate Flower (Joy), Opium Poppy (Dreams, Illusions), Thistle (A Threat) – with a few others like the Cactus (A Prickly Situation), Flax (Skills, Crafts), Intoxication (Grapevine), Wallflower (Shyness) - a passive-looking woman being stripped away from the wall by an oddly-dressed tramp figure - deadly Hemlock (Treachery, Deception), and my favourite, the pair of companions in Tea and Coffee (Friendship). Insects also appear in secondary roles, as attendants in Lily (Pure Motives) and a pipe-smoking beetle in Mimosa (Sensitivity).

Others that stood out for me are Hawthorn, which shows a well-dressed flower-woman and child reeling back in terror from a giant pair of pruning shears, and is titled A Necessary Evil. The Water Lily (Faith, Piety) is also clever; the personified flower is a tall woman in a green head-dress and habit of leaves. The scenes often perfectly sum up their meanings and floral associations, as in Forget-Me-Not (A Farewell), a woman dressed in white adorned with rows of blue flowers, stands on a riverbank and waves a bouquet of the same flowers after a departing boat; and Violet (Shelter, Retreat), where three flower-women are seated in the shade of the plants leaves overhead.

Each card has a light border around the scene with the phrase or situation illustrated by the personified flowers at the bottom, and the name of the flower underneath the scene. The cards are large in size and on a very flexible stock, with a soft matte finish. The back has reversible/mirrored design in gold and white, which also has the title of the deck in unobtrusive print.

The companion book for the Victorian Flower Oracle has been written by Sheila Hamilton, an English poet, writer and holistic therapist, who has a long-standing love of Victorian art and is experienced with tarot and oracle decks. Her book starts with a nice introduction to JJ Grandville and his works, the concept of flower symbolism and the Victorians rather detailed ‘Language of Flowers’. More practically, there are instructions on how to use the oracle deck, sample one-card draws, and a sample reading with the original ‘Bouquet Spread’.

The rest of the book is devoted to clearly explaining cards themselves. Each card begins with a black and white illustration, followed by major keyword and phrases of the card, and general information on the plant. The interpretation starts with a card description, moves onto associations with that symbolism, and asks useful questions on what that card might be telling you in a reading.

An homage to the Victorian era, the deck has an authentic feel in costume, concept, and artistic illustrations, and easy-to-understand images that are expressive and interesting, never bland. Step back in time with the language of flowers and the Victorian Flower Oracle, and gain its gentle insight into your daily life.