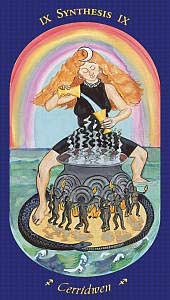 The Wise Woman's Tarot is a female-oriented, multicultural and spiritual tarot set featuring goddesses (and a few gods) from hundreds of cultures worldwide. A personal project, the cards were used intensively by the author before publication. 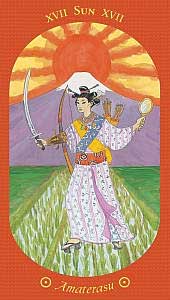 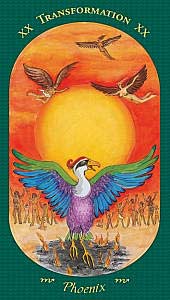 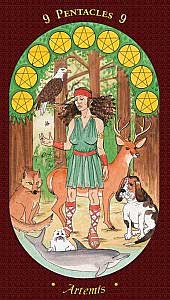 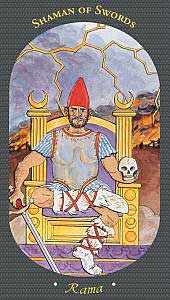 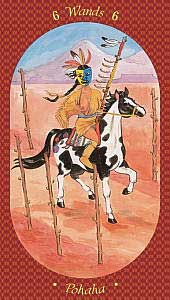 A new female-focused, multicultural and independently published tarot set, the Wise Woman's Tarot was created by Flash Silvermoon, a Dianic Wiccan and activist in the women's movement since the 1970s.

Silvermoon's vision for her tarot was to 'illustrate the global nature of the Feminine Lineage while providing and exceedingly useful tool for divination and empowerment'. This is a matriarchal deck, in that sense that its social, political and religious systems have a cyclical perspective, and value life and nature over the patriarchal values of power, possessions and property. But men are by no means excluded from this deck as they are from other feminist tarots, though the emphasis is very definitely on women. Men appear infrequently in the minors (Orpheus as the Seeker of Cups, King Minos as the Four of Pentacles, Attis as the Shaman of Pentacles) and do not appear in the majors at all.

Research for the Wise Woman's cards took her into the cultural myths and feminine heritage of more than one hundred cultures throughout the world, and the cards feature a diverse array of deities. Representatives from the better-known Greek, Roman and Celtic pantheons, as well as lesser-known goddesses (and a few gods) from every human era and area - the variety is staggering. Polynesian, Semitic, Tibetan, Polish, even Eskimo (Inuit) and Caribbean - and that's just a few of them.

As you might expect, the majors have been substantially altered in title and image, and reshuffled to better show the feminine side of the 'spiritual evolution' of the human race. The Star appears towards the beginning of the trumps, the Empress card has been split into two cards - III Fertility - Oshun and V The Nurturer - Venus of Willendorf, and Justice and the Wheel are near the end of the arcana. (This does make the cards a little confusing to use for the experienced tarot reader, at least until you've thoroughly read the book and mentally matched up the cards a few times.) All majors have an Goddess association, though the correspondence is in some cases a composite image of several cultures.


The minors have situational cards interspersed between many minor deities. The suits are standard Wands, Swords, Cups, and Pentacles, and the court card titles are Priestess, Shaman, Seeker, and Maiden (equivalent to Queen, King, Knight and Page). All cards also have unique and very tiny subliminal symbols: miniscule images repeated as a pattern in the coloured borders of every card. (The majors have an individual symbols for each trump, but the minors only differ for each suit.)

In the hand the cards seem very large, as they are printed on rectangular 8.5cm wide x 15cm high, glossy, flexible and very thin card stock. Two extra cards are also included with quick notes on goddess associations and divinatory keywords, called 'major/minor arcana at a glance'. (Well, three sides of these cards have keywords; the fourth side is an advertisement for Silvermoon's other creations and services.) The set also comes with an oversized cloth bag that is large enough to fit both the cards and companion text.

The companion book, The Wise Woman's Tarot, is a 178 page spiral bound text. With plenty of background on global women's history and symbols, and the matriarchal myths and cultures that forms the basis for the cards, it's also a tarot primer. There are basic instructions on using the cards - including a section called 'Care and Feeding of Your Tarot Deck' - five spreads and sample readings, and even an unusual section explaining how to read for your pet. The text is more personal than most tarot books; along with the colour-printed card images in the book are numerous black and white photos of the author, her friends, and pets, images of her process of developing the tarot set throughout the book.

Beginner reader or not, you will need to learn a new and unique tarot system to use these cards effectively. However, Silvermoon used these cards as her main tarot set for several years before publication, so they have been intensively tested! If you are seeking a deck with a female or Goddess emphasis, you'll definitely find the Wise Woman's Tarot worthwhile.

When I sat down to write a review on this magnificent body of work, I wondered if I'd ever get to the end of my rave. Flash Silvermoon's 2002 Wise Womans Tarot is the best Tarot set to come out into the market for many years. Keeping in mind that my own roots in the Tarot are in the feminist tradition, you might imagine how I struggle to restrain my excitement about Flashs contribution to the modern Tarot.

This body of work took her a whopping 26 years to manifest. Barbara Vogel is the artist who painted these gorgeous images in consultation with Flashs understanding and interpretation of the Tarot. Flash has obviously spent many hours researching, divining, and journaling what has become a truly unique contribution to an understanding of the Tarot.

It's hard to choose my favourite cards in this deck. Truthfully I loved them all but if I had to make a choice I'd say Isis (Flash has named this card Illumination which is called The High Priestess in other decks) is among those that stand out. This card and its interpretation is so wonderful. The card depicts a winged Isis standing strong, tall in the centre of a brilliantly coloured temple, which is in the centre of a scene from another world that Flash has been honoured to experience in her spiritual world. Another is Oshun - Flash has named this card Fertility which represents one of the two cards she has designated to what is called the Empress in the traditional decks. The second Empress card depicts the Venus of Willendorf which represents the side of the Empress that is motherly, nurturing, and bountiful. Oshun represents the sexual, fecund, seductive and healing side of the Empress. Shes delightfully depicted lounging naked against a tree while the healing waters flow from her vagina into the river where two womyn are bathing. But the truth is that these cards represent the first few cards in the Majors and if I went through the rest of the deck I'd have wonderful things to say about them all.

This is a stunningly beautiful, mystical and easy to read deck brilliantly coloured, beautifully crafted, and artistically stunning; it's a treasure trove of Goddesses from around the world depicted in their regional habitats of worship. But the Goddesses are more than depicted; they are doing, holding, expressing and representing amidst a plethora of sacred objects, activities, and characters converging to make this deck delightful, and smooth to read. Flash asserts that having worked with this deck herself for several years, her readings have been amazingly accurate, mystical and healing for all those clients who frequent her practice. After doing several readings for myself using this deck, I have to agree. The deck has changed forever the way I read and teach the Tarot.

Although I've been reading and teaching the Tarot from a feminist perspective for many years, somehow the Wise Woman Tarot has shifted my focus to encompass more of the magic, psychic processes, and esoteric power the Tarot embodies. Flash has so profoundly captured and demonstrated evolution, spirit into matter and the sacredness of reading in her work its influence will be rippled into the far distant future when Tarot cards that are sexist, racist, and classist are viewed with the distaste they deserve.

The accompanying book to this deck is rich with Goddesses cross-culturally; its a veritable anthropological treatise thats a must for every Taroist, especially all of you feminist Tarotists out there! This book represents Flash's work which spans a thirty year herstory, as a powerful reader and teacher of the feminist Tarot, and activist in the womyns spirituality movement. Her book is replete with personal and collective womens spirituality stories, examples, and coloured pictures.