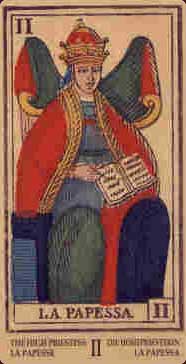 The Ancient Tarots of Liguria-Piedmont is a reproduction of a historical Marseilles-style deck from the the northern Italian region of Piedmont. The original deck was published in 1860.


Card Images from the Ancient Tarots of Liguria-Piedmont 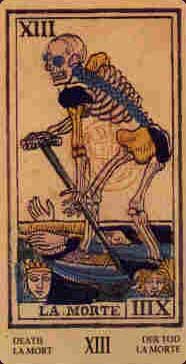 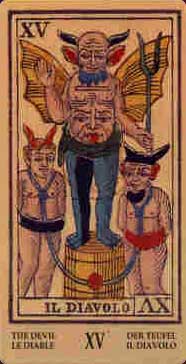 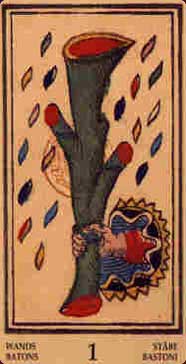 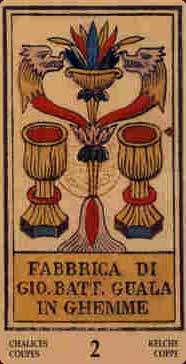 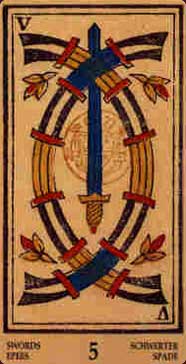 "The Ancient Tarots of Liguria-Piedmont" is one of a series of historical decks from Lo Scarabeo. It is a 1995 reprint of an 1860 deck from the Piedmont region of Italy, created by Giovanbattista Guala, following the Marseilles tradition. Some of the more unique features of this deck are the printers stamp that appears on each of the cards (in some cards it is more visible than in others); the numbering of the Major Arcana, in Roman numerals, in the upper left hand (upright position) and lower right hand (reversed position) corners of the card, and in the middle of the bottom of the card; and the artist signature on each of the Court cards and the Two of Cups.

The Court cards are: Re (King), Regina (Queen), Cavaliere (Knight), (There is no name on this card) (Page).

The cards are approximately 2 3/8" by 4 1/2", of flexible, quality, glossy card stock. The backs carry an ochre background color, with an overall floral design in brownish-red. The faces show a black border approximately 1/4" in from the edge, followed by a 1/4" ochre border, followed by a thin black border. The Major Arcana are titles in Old Italian at the bottom of the picture, with the title in smaller lettering, in black, under the picture (in English, French, Spanish, and modern Italian). The card number appears, in Roman numerals, at the top left hand corner (in the upright position), the bottom right hand corner (in the reversed position), and in the middle of the bottom of the card.

The Pips (numbered cards) are shown Marseille style, with symbols but no pictures. The Two of Chalices (Cups) carries the illustrators signature. For the suit of Chalices and Pentacles, the number appears in the middle of the card, on the bottom, between the card titles, which are listed in four languages: English, French, Spanish, and modern Italian. For the suits of Wands and Swords, the card number is listed in the middle of the bottom of the card, with the suit titles (listed in English, French, Spanish, and modern Italian) on either side. Cards two through ten also have the number in Roman numerals on the top left hand corner (upright) and bottom right hand corner (reversed). The suit of Swords shows curved swords, with the odd numbered cards showing the odd sword as a straight sword.

The deck comes with a title card and instruction cards (taking the place of the Little White Book (LWB). The instruction cards are in English, French, Spanish and Italian, listing the upright meanings of the cards and a simplified method for reading, based on the meaning of the suits.

The coloring for this deck is muted red's, blue's, and gold's. The Pips include limited floral imagery, rather than the more austere clean background of decks like the "Ancient Tarots of Lombardy". There is a very gentle feel here, and could be used with all levels of Seeker's. the "Ancient Tarots of Liguria-Piedmont" would appeal to historians, collectors, and those who read with Marseille style decks, or wish to learn to read with them.