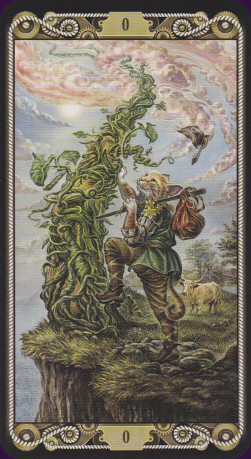 The CatTarot is a fabulous 78-card deck of felines illustrated as famous figures from literature, history, TV and movies. The cast of characters is diverse, from Marilyn Monroe to Genghis Khan to Captain Nemo to Luke Skywalker. A charming, humorous, and beautifully illustrated tarot deck.


Card Images from the CatTarot 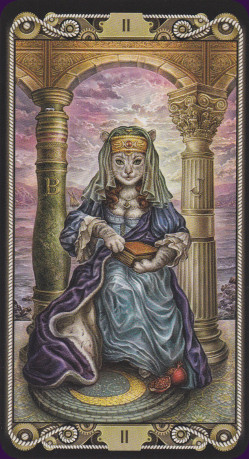 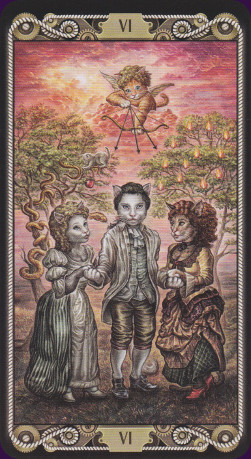 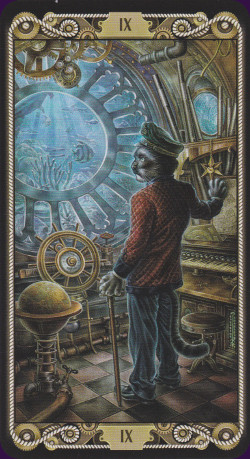 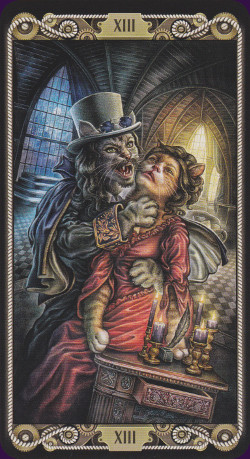 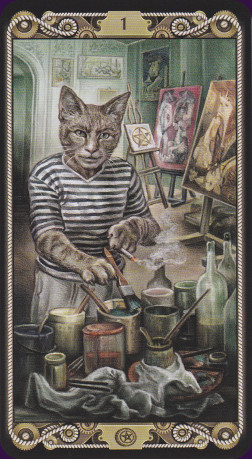 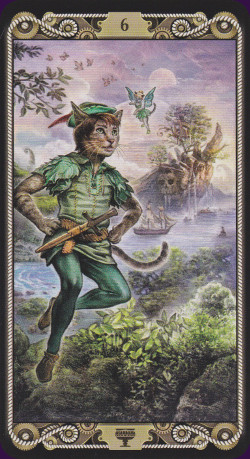 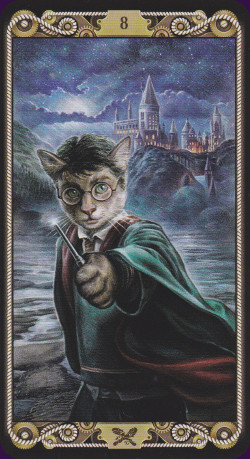 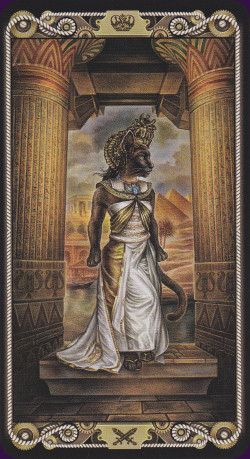 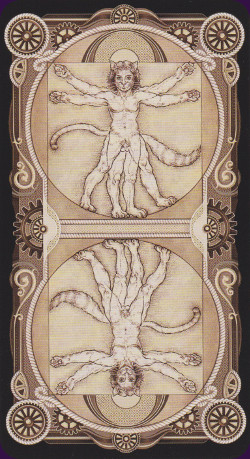 The fascinating and fashionable partnership of cats and tarot cards has spawned more than 20 kitty-centric decks. Into this somewhat competitive arena comes the outstanding, eye-popping CatTarot.

This deck distinguishes itself with dynamic illustrations and unique interpretations of classic tarot imagery. The cats in this deck are closer to were-cats (sans murderous ferocity) than your average garden-variety kitty cat, with faintly human features, trademark haircuts, lavish costumes and settings, and distinctly non-feline activity.

The artwork is incredible, each image is finally detailed with authentic mis en scene. The artist has approached each piece with the same enthusiasm and integrity which has resulted in a tarot rarity – every card is a small masterpiece.

While the central characters are rendered with meticulous attention to even the smallest features, backgrounds including flora, sea, and skies provide moody support for the cards narrative.

Some of the character casting betrays a marvellous sense of humour, and add layers of insight and definition to the cards divinatory meanings. Personages such as Jack the Ripper representing Death, Captain Nemo as the Hermit, Gene Kelly singing in the rain as the King of Cups typify the concept originator Carole-Anne Eschenazi and artist Diana Cammarano’s eccentric and inspired choices. It must be noted that the Little White Book lists the 2 of Cups as being Carrie Bradshaw, however the finished product features Laurel and Hardy – an intriguing choice pointing more towards a successful partnership than romance.

This is a 78 card deck featuring 22 Major Arcana and 56 Minor Arcana. The Minor Arcana consists of four suits: Cups, Wands, Pentacles, and Swords. Each suit has 10 number cards and 4 Court cards – Page, Knight, Queen, and King. The Major Arcana features the standard ordering as defined by A. E. Waite, and no significant changes have been made to titles. Every card in this deck has an alternative feline oriented name for example Alice in Catland, Cater Pan, Catderella, however these do not feature on the cards themselves.

The cards measure 65 x 120 mm – this makes them a standard sized Lo Scarabeo deck, a little narrower than some decks but not significantly small or slim. The card stock is excellent: light yet sturdy, flexible but not flimsy. The finish is smooth and low sheen which facilitates easy handling and shuffling. The cards have a good weight to the and they sit comfortably in one's hands.

The print quality is superb – these images are complex, detailed and refined and their reproduction is clean, clear and crisp. There are no misprints, no blurring, and no colour bleeds. The artist's palette is naturalistic and unlimited, with no particular colour scheme dominating the images. The colours are sumptuous, dramatic, and gorgeous, with magnificent lighting.

The artist's style demonstrates mastery of artistic technique – the images are a sort of fairytale realism of the type often found in children's books. Everything is made to look as 'realistic’ as possible given the fantastic situations.

Each image has a Steampunk-type frame featuring ropes, cogs, and wheels, and outside this a black border reaching to the edge of the cards. The Major Arcana is defined by numbers on a small plaque at both the top and bottom of each image, the Minor Arcana features the same plaques with a number at the top and a small symbol representing the suit or court position at the bottom.

The image on the back of the cards features mirror images of a feline version of da Vinci's Vetruvian Man, which makes the cards reversible. The cards come packaged in a close-fitting high-gloss cardboard box printed with images from the deck. While this box provide adequate protection for the deck, it will not withstand rough or careless handling, and will require some protection such as a bag or card box if it is going to be taken on the road. It is however small enough to easily slip into a bag or backpack.

The 63 page Little White Book features instructions by Carole-Anne Eschenazi in 5 languages – English, Italian, Spanish, French, and German. There is a brief introduction in which the writer describes the genesis of the CatTarot. The divinatory meanings are as idiosyncratic as the illustrations – while they don't drift far from commonly accepted interpretations, they have been crafted to complement the artwork. They also skilfully utilise the pop culture references contained in each image to bolster the interpretations. For example the Ace of Swords - Luke Catwalker - tells the Seeker "Find the right mentor and begin your crusade. Fight for freedom. Let light prevail over darkness. May all forces be with you!” A single 7-card layout titled Spread of the Cat Hero is included, which is a form of all-purpose reading.

This is an outstanding tarot deck of great imagination and beauty which will be appreciated by cat and tarot lovers alike. The artwork is exceptional, the concept is clever, the execution is delightful. I would not recommend this deck for tarot beginners, simply because standard tarot symbolism is absent from the images. However tarot adepts will find this deck easy to use, and more than a little charming. If you are looking for a deck that is wonderfully illustrated, imaginative and eccentric than this deck for you.