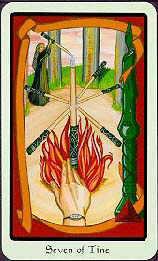 Learn the tales and legends of Old Ireland in the Faery Wicca Tarot. Based on the modern Faery tradition of the nature based Wiccan religion, the artwork is bright with primary colours but rather attractive. 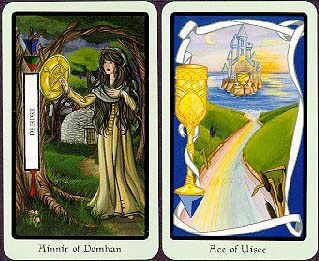 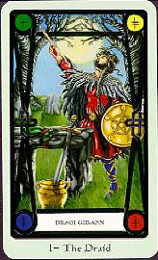 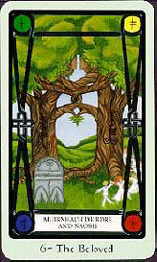 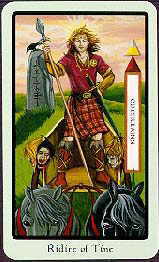 A renowned author on the Faery tradition of Wicca, Kisma Stepanich offers a rather singular system of Tarot based on her own spiritual awakening and research. The Faery Wicca Tarot is reportedly inspired by a visitation from the Danu while the creator of this deck was meditating atop Sliabh na Cailligh in Ireland. During this revelation, she realized that each of the four suits represented the Faery cities of the underworld and each pip card symbolized a portion of a journey to those cities.

As one can easily tell, this is quite a unique deck that may prove to be a rewarding challenge to the reader interested in Faery cosmology. This challenge, however, is likely to be more significant for the beginning reader or someone who is deeply enmeshed into the Rider-Waite-Smith (RWS) system. Although Stepanich maintains much of the meanings associated with the RWS framework, the translation of the cards into the Irish Faery counterparts may be somewhat disconcerting to the new reader. In this deck, wands become Tine, cups are Uisce, pentacles are Domhan, and swords become Aer. Similarly, pages are now Ainnir, knights translate to Ridire, queens become Banrion, and the kings are now Ard Ri. The Major Arcana, in this deck consists of 23 “power cards.” This series begins with “00, The Tree of Life,” continues through various renditions of the RWS Major Arcana (which are, by many accounts, truly unique to this deck) before ending with “21, The Weaver Goddess.” Each power card is bedecked with an arrangement of Ogham staves to highlight their symbolic quality. An extra benefit to the users of this deck appear in the form of five additional “Faery Cards” (The Apple Branch, The Crane Bag, The Hazel Wand, and the Holey Stone), to aid the seeker in his or her journey through the land of Faery.

Clearly, the 167-page booklet that accompanies this deck is an absolute necessity for the fulfilling use of this deck. It details the purpose and use of the Faery Wicca Tarot, provides insight into the mythological meanings of each card, suggests meditations, details unique spreads, and even offers an index of Ohgam writing!

Printed on high-quality plastic-coated card, this deck is beautifully illustrated with deep, vibrant colors and is rich in detail and symbolic quality.

In short, the Faery Wicca Tarot is a beautiful deck for the experienced reader who wishes to deepen his or her understanding in Irish Faery mythos. Once the adjustment to the new nomenclature of the cards is made, this deck is likely to facilitate a deeper level of self-understanding for all who seek its guidance.

This deck was the first I ever purchased. It is the one deck I use most often and goes with me everywhere. The artwork, by Christine Yates,  is absolutely beautiful and filled with symbolic detail.  Kisma Stepanich wrote the companion book and was inspired to create the Faery Wicca Tarot one day while sitting in a stone circle in County Meath, Ireland.  The book goes into great detail about each card and the various symbols on them.

The characters depicted in the Major Arcana are based on Celtic lore and myth of the Gods/Goddesses. Each card corresponds with one of the legends and how it relates to the Tarot.  One example of this is the number 6 card, The Beloved. It tells the tragic story of Deirdre and Naosie. The Court Cards of the Minor Arcana feature legendary heros from Celtic mythology with each card being unique to that character. The Minor Suits tell of a spiritual journey from one level to the next.

There are five "bonus" cards including in the deck. One is number "00" and depicts the Tree of Life. The other four are called "Faery Journey" cards and these represent different tools from apprentice to adept. The deck is very spiritual in nature as are the meanings. It corresponds with the pagan teachings of Faery Magick. What I find most wonderful about this deck is the fact that each card is unique. Many decks picture the Minors as being the same with the suit and sometimes color changed. The Faery Wicca Minors are different from one to another.

The only drawback I might see in this deck is that is not really meant for a beginner. The Minor Arcana is written in Gaelic which has made it difficult for me at times to relate to a more traditional deck. The Pentacles are called Donham, Cups ­ Uisce, Wands ­ Tine, and Swords ­ Aer. The Court cards, instead of the traditional names, are Banrion, Ard Ri, Ridire, and Ainnir. However, I have a great love for the Celtic/Irish mysteries and the deck really speaks to me. I would recommend it to anyone who has an interest in Celtic lore and magick.