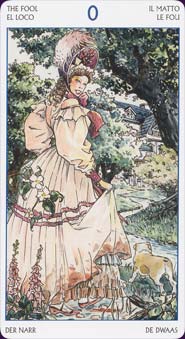 The Tarot of Jane Austen is a wonderful tarot with characters and situations from the books of 19th century English author, Jane Austen. The cards are fully-illustrated, and mainly feature scenes from Pride and Prejudice, Emma, Sense and Sensibility, and Mansfield Park. Available as a standalone deck, now in a kit with a companion book.


Card Images from the Tarot of Jane Austen 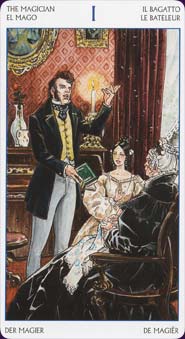 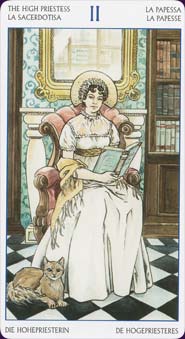 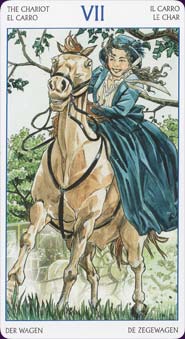 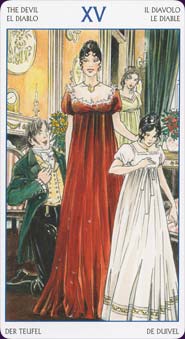 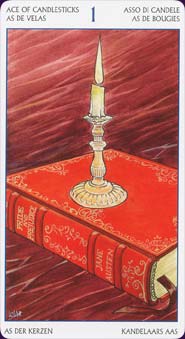 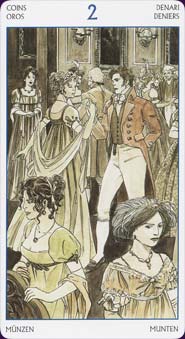 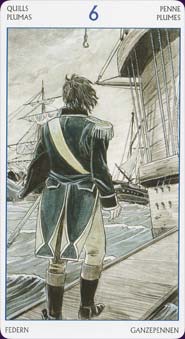 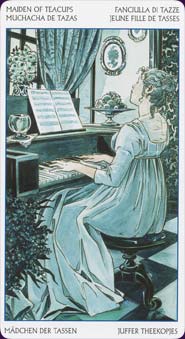 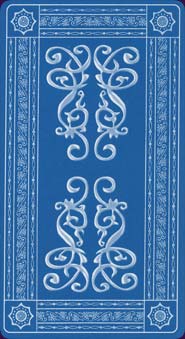 The "Tarot of Jane Austen" is based on several works by the author Jane Austen, including "Emma", "Lady Susan", "Mansfield Park", "Northanger Abbey", "Persuasion", "Pride and Prejudice" and "Sense and Sensibility". Wilkes (webmistress for the prestigious Tarot Passages web site) has done an excellent job of matching characters from these works with the archetypes and characters that tell the story that is the Tarot.

The kit comes with a 78 card deck, a LWB (Little White Book), and a 175 page companion book. The LWB, in the style of Lo Scarabeo, has sections in English, Italian, Spanish, French and German. There is a short introduction, with each card being presented with keywords and key concepts. No scans are shown. The suits are Candlesticks (Wands), Teacups (Cups), Quills (Swords) and Coins (Pentacles). The spreads presented are: Love and Friendship and the Bildungsroman (referring to a specific type of literary genre, the novel of education/formation within the context of a defined social order).

The companion book is nicely indexed, with the pages for specific cards noted. I thought that this started the book out nicely! In her introduction Wilkes notes that the major point that brings Austen's works together with the Tarot is that they contain an essentially identical message: the vital importance of balance in our everyday lives. Wilkes goes on to say that she feels that Austen, through her books, provides a template for the way that life should be lived.

Following her introduction, Wilkes presents a nice synopsis (called a Movie Guide) for the works included in this deck. This is a great help for those of us that have read some, but perhaps not all, of these works. It might even encourage us to go check them out!

The Major Arcana are presented with a black and white scan, the book that the card imagery is taken from, a description of the card, the storyline from the book, an extensive interpretation for the card, and a "What would Jane do?" section that shows the reader what advice Jane Austen would give based on the individual card. The Minor Arcana Pips (numbered cards) are presented int he same fashion, without the storyline.

Wilkes has also presented a unique section that I like a great deal: she provides a template for doing an overview of a reading, called a Card Connections Checklist. This includes things such as the suit and elemental connections between the cards, repeating numbers, card analysis for Majors, Minors and Court Cards, image-based connections between repeating colors, repeating symbols, directions and mood, the number of reversals, and story connections.

At the end of the book Wilkes has provided a synopsis of each of the books used for this deck, followed by a short bibliography.

The cards themselves are approximately 2 5/8" by 4 3/4", of sturdy card stock. The artwork is very realistic and reflective of that time period. The characters, through body posture and facial expression, become very three dimensional, as if you could step right up and start talking to them. The colors are muted, as is so often the case with Lo Scarabeo work. The primary colors are gray, green, a brownish-burgundy, burgundy, orange and gold.

This is an amazing deck, both for the artwork and for the time taken to research and present Austen's works in a manner quite complimentary to the Tarot. I have many favorite cards, amongst which are the Lord of Coins, which shows Colonel Brandon, from "Sense and Sensibility" ... quite a stern figure, seated in his study looking out his window; Death, also from "Sense and Sensibility", which shows an older man lying in bed in his well appointed bedroom, his worried wife and daughters standing at the doorway, his son kneeling at his bedside; the Ace of Candlesticks speaks tombs in its simplicity ... a lit candlestick seated atop a red book (the card shows a white candle, the text speaks of a red candle). Note: Each of the Aces shows the suit icon atop a book, and the imagery is absolutely breathtaking!

The World (from "Emma") shows Emma and George Knightly in their wedding finery under a bower of flowers; the Hermit (from Pride and Prejudice) shows Mr. Bennett at his desk in his library; the Magician (from Mansfield Park) shows Henry Crawford standing in the middle of a well appointed sitting room in Mansfiedl Park, with Fanny Price and Lady Bertram seated in front of him.

This is a stunning deck, with an extremely well written companion book. I would advise getting the kit ... the deck without the book might be a little hard to work with unless you were a Jane Austen aficianado. This deck will appeal to collectors, Jane Austen fans, and those readers that are looking for a really nice "general" deck for their clients to choose from. I came to this deck late, but am enjoying it thoroughly!